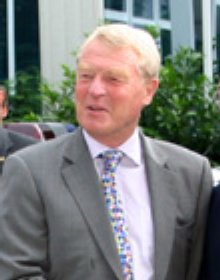 Ashdown is the eldest of seven children

After his father's business collapsed, he took a naval scholarship to pay for his school fees, but left before taking and joined the in 1959, serving until 1972. He served in during the and the Persian Gulf before Special Forces training in 1965, after which he joined the elite and commanded a Special Boat Section in the Far East. He then went to in 1967 to undertake a full-time interpreter's course in Chinese, and returned to England in 1970 when he was given command of a Commando Company in .

After leaving the Marines, Ashdown worked for the as first secretary to the United Kingdom mission to the in .

It has been speculated that this "cushy but dull" job was a cover for a role with ,

Whilst in the Marines, Ashdown had been a supporter of the Labour Party, but joined the Liberal Party in 1975, and decided to leave his diplomatic career to enter Liberal politics in his wife's home town of in . In 1976 he was selected as the Liberal Party's for the Yeovil constituency, and took a job with Normalair Garrett, then part of the Yeovil-based Westland Group. He subsequently worked for Tescan, and was unemployed for a time after that firm's closure in 1981, before becoming a youth worker with County Council's Youth Service, working on initiatives to help the young unemployed.

Ashdown had a comfortable life in Switzerland, where he lived with his wife Jane, and Jill and Monica their two children in a large house on the shores of , enjoying plenty of time for sailing, skiing and climbing. When he left the diplomatic service, he said that "most of my friends thought it was utterly bonkers", but that he had "a sense of purpose". [cite news |url=http://search.ft.com/nonFtArticle?id=031024005178 |title=Bridge builder |author=John-Paul Flintoff |work= website |date=24 October 2003 |accessdate=2007-11-23]

In the 1979 general election which returned the Conservatives to power, Ashdown regained second place, establishing a clear lead of 9% over the Labour candidate.

Ashdown had long been on on his party's social democratic wing, supporting the 1977 , and the . In the early 1980s he was a prominent campaigner against the deployment in Europe of American nuclear-armed s, describing them at a rally in Hyde Park in 1983 as "the front end of the whole anti-nuclear struggle. It is the weapon we HAVE to stop." [cite news |url=http://www.julianlewis.net/press_detail.php?id=78 |title=Nuclear record hard to defend |author= |work=Western Gazette |date=28 November 1996 |accessdate=2007-11-23]

Shortly after entering the House of Commons, he was appointed spokesman on Trade and Industry and then on Education. He opposed the privatisation of in 1984, in 1986 he criticised the Thatcher government for allowing the United States to bomb Libya from UK bases, and in 1987 he campaigned against the loss of trade union rights by workers at .

Ashdown led the Liberal Democrats into two general elections, in 1992 and 1997. The LibDems recorded a net loss of two seats in 1992, when the party was still recovering from the after-effects of the 1988 merger. However at the 1997 election, the Liberal Democrats won 46 seats, their best performance since the 1920s.

As leader he was a notable proponent of co-operation between the Liberal Democrats and "New Labour", and had regular secret meetings with to discuss the possibility of a . After Labour's 1997 victory a "Joint Cabinet Committee" (JCC) including senior Labour and Liberal Democrat politicians was created to discuss the implementation of the two parties' shared priorities for constitutional reform; its remit was later expanded to include other issues on which Blair and Ashdown saw scope for co-operation between the two parties. Ashdown's successor as Liberal Democrat leader, , deliberately allowed the JCC to slip into abeyance until it effectively stopped meeting,fact|date=December 2007 although it is not clear if it was ever formally dissolved.fact|date=December 2007 Blair and Ashdown also agreed to create the Jenkins Commission to conduct a public inquiry into the case for electoral reform. Chaired by Liberal Democrat peer , the commission recommended replacing the first-past-the-post electoral system with a system of proportional representation for use in General Elections, in line with a key demand of Ashdown and his party. However, Blair remained unconvinced of the case for electoral reform,fact|date=December 2007 and the commission's recommendations have never been passed into law. The plan to bring Liberal Democrats into the government continued, according to Ashdown's published diaries,cite needed|date=December 2007 but foundered on opposition from senior Labour ministers.fact|date=December 2007

Ashdown resigned the leadership in 1999 and was succeeded by Charles Kennedy. He was knighted (KBE) in 2000 and became a as Baron Ashdown of Norton-sub-Hamdon, of in the County of in the after retiring from the Commons in 2001. In the 2001 election, the Yeovil seat was retained for the Liberal Democrats by .

In June 2007, the reported that Ashdown had been offered, and rejected, the Cabinet post of by incoming Labour Party Prime Minister . [cite news |url=http://news.bbc.co.uk/1/hi/uk_politics/6224862.stm |title=Brown offered Ashdown Cabinet job |author= |work= News online |date=21 June 2007 |accessdate=2007-11-22] Liberal Democrat leader had already ruled out the idea that members of his party would take seats in a Brown cabinet, but, according to the reports, Brown still proceeded to approach Ashdown with the offer.

High Representative for Bosnia and Herzegovina

After leaving British politics, he took up the post of the on 27 May 2002, [cite news |url=http://www.telegraph.co.uk/news/main.jhtml?xml=/news/2002/05/28/wash28.xml |title=Ashdown takes over in Bosnia |author=Alex Todorovic |work= |date=27 May 2002 |accessdate=2007-11-23] reflecting his long-time advocacy of international intervention in that region. He succeeded in the position created under the . He is sometimes denigrated as "the of Bosnia" by critics of his work as High Representative. [cite news |url= |title=Message from America: we're independent |author= |work= |date=7 July 2002 |accessdate=2007-11-23] [cite news |url= |title=Team Gordon: Michael White suggests his dream team for a Brown cabinet |author= |work= |date=22 June 2007 |accessdate=2007-11-23 |quote=But even allowing for all that, it is hard to imagine such an energetic 66-year-old, a former viceroy of Bosnia, too, confining himself to the Northern Ireland brief, especially now that Messrs Paisley, Adams and co have taken an oath not to remember the past. With luck they won't leave much for Posh Paddy to do there.]

Witness for the prosecution at the trial of Slobodan Milošević

After the Delic claims, Ashdown supplied the Tribunal with grid coordinates and a cross section of the ground indicating that he could indeed see the locations concerned. [ [http://www.un.org/icty/transe54/050928ED.htm Milošević trial transcript 2005 Page 44684 Line 1] ] These coordinates indicated he was on the Kosovo/ Albania border, which was a sealed border at the time. [ [http://www.un.org/icty/transe54/050928ED.htm Milošević trial transcript 2005 Page 44721 Line 1] ] The prosecution also used some new maps indicating Ashdown's location, but their accuracy was challenged by Delić, as the location of a village was different from other maps of the area. [ [http://www.un.org/icty/transe54/050928ED.htm Milošević trial transcript 2005 Pages 44721 to 44728] ]

He was also mentioned as a possible candidate to take charge of the allied effort in Afghanistan. [cite news |url=http://news.bbc.co.uk/1/hi/uk_politics/7140551.stm |title=Dismantling the Taleban is the aim |author=Paul Reynolds |work=BBC News website |date=12 December 2007 |accessdate=2007-11-23 |quote=One "big idea being pressed by the British government is for the appointment of a senior international figure to be the UN representative for Afghanistan. The name of Lord (Paddy) Ashdown, who ran Bosnia-Herzegovina after the civil war, has been mentioned.] [cite news |url=http://www.washingtonpost.com/wp-dyn/content/article/2007/12/16/AR2007121601823.html?hpid=topnews |title=Bush Faces Pressure to Shift War Priorities: As Iraq Calms, Focus Turns to Afghanistan |author=Michael Abramowitz and Peter Baker |work= |date=17 December 2007 |accessdate=2007-11-23 |quote=Administration officials said the White House is considering a range of steps to stem the erosion, including the appointment of a leading international political figure to try to better coordinate efforts in Afghanistan. European newspapers have focused on Paddy Ashdown, a British politician and envoy, but a former senior military officer said his appointment would be considered controversial and seems unlikely.] An unnamed source is quoted in a 16 January Reuters report indicating that Ashdown, when approached by UN Secretary-General Ban Ki-Moon, accepted the post. [cite news |url=http://uk.reuters.com/article/worldNews/idUKL1664024720080116?feedType=RSS&feedName=worldNews |title=Ashdown accepts job as U.N. Afghan envoy |author=Michael Abramowitz and Peter Baker |work= |date=16 January 2008 |accessdate=2008-01-16 |quote=Paddy Ashdown has agreed to become the United Nations' envoy to Afghanistan, a source close to negotiations on the post said on Wednesday. "Yes, he has accepted the job," the source said of an agreement between Ashdown, 66, and U.N. Secretary-General Ban Ki-moon.] He has now withdrawn his interest in taking the role, after Afghanistan said it preferred General Sir John McColl [ [http://news.bbc.co.uk/1/hi/world/south_asia/7211667.stm BBC News, 2008] .On March 7 2008 Norwegian diplomat Kai Eide [http://en.wikipedia.org/wiki/Kai_Eide] was appointed as the UN representative for Afghanistan, stating "I'm not Paddy Ashdown, but don't under-estimate me." [http://news.bbc.co.uk/2/hi/south_asia/7318452.stm]

Ashdown married Jane Courtenay in 1962. The couple have two children, Simon and Katharine, along with three grandchildren. In 1992 following the press becoming aware of a stolen document relating to a divorce case, he disclosed a five-month affair with his secretary, Patricia Howard, five years earlier. He and his marriage weathered the political and tabloid storm, with his wife of 30 years forgiving him, but headlines in the press were merciless &ndash; "The Sun" famously dubbed him "Paddy Pantsdown". [cite news |url=http://politics.guardian.co.uk/libdems/story/0,9061,446036,00.html |title=End of the Ashdown era |author=Lucy Ward |work= |date=21 January 1999 |accessdate=2007-11-22]

* [http://www.libdems.org.uk/party/people/ashdown-of-norton-sub-hamdon.html Lord Ashdown of Norton-sub-Hamdon] profile at the site of Liberal Democrats
* [http://www.ohr.int/ Office of the High Representative in BiH]
* [http://www.guardian.co.uk/yugo/article/0,2763,1606489,00.html "Farewell, Sarajevo"] , "", 2 November 2005
* [http://archives.lse.ac.uk/dserve.exe?dsqServer=lib-4.lse.ac.uk&dsqIni=Dserve.ini&dsqApp=Archive&dsqDb=Catalog&dsqCmd=Overview.tcl&dsqSearch=(RefNo='ashdown') Catalogue] of the papers of Paddy Ashdown at [http://www.lse.ac.uk/library/archive/Default.htm London School of Economics Archives]
* [http://www.gresham.ac.uk/event.asp?PageId=45&EventId=638 "After Iraq - Shall we ever intervene again?"] , lecture by Paddy Ashdown, given at , 15 May 2007 (available for download as video or audio files)