The JDS Mirai, DDG-182, is a fictional ship created for the anime series Zipang. The central point of the plot of the anime is that the modern warship Mirai is transported back sixty years through time to the year 1942 on the eve of the Battle of Midway. The ship's weapons alone are enough to change the course of World War II, but equally potent are the advanced technology and knowledge of future events on board. The name of the ship is a homophone for the Japanese word meaning "future" and is often the basis of double entendres in the anime. (The phrase "Mirai no nipponjin," (みらいの日本人), often repeated in the anime, for example, can mean "Japanese people of the ship Mirai" or "Japanese people in the future.")

The Mirai is a ship of a fictional Yukinami class of destroyer, which was created for the story. The fictional ships are essentially an improved version of the very real Japan Maritime Self-Defense Force Kongō class, which is a modification of the United States Navy's Arleigh Burke class. All of these ships are equipped with the Aegis combat system that provides the vessels possessing it the capability to locate, track and target a large number of enemy vessels, aircraft and even missiles at ranges and with accuracy that was unimaginable in World War II.

Some sources describe the Mirai as a cruiser rather than a destroyer. This is because a modern guided missile destroyer is about the size of a World War II light cruiser (the Mirai is actually longer than the Kuma-class light cruisers and broader than the Takao-class heavy cruisers.) and, in the context of the story, the WW II era characters misidentify the Mirai as a cruiser. Some sources have picked up this misidentification and reported it as factual.[1][2][3]

Differences Between the Mirai and the Kongō class

The major difference between the Mirai and the Kongō is that the fictional ship is ten meters longer, which provides space for an aircraft hangar on the aft part of the ship. Real destroyers of the Kongō class have a helicopter landing pad on the fantail but do not carry any aircraft on board. The hangar on the Mirai allows her to carry a SH-60J Seahawk helicopter and a (fictional) VTOL armed reconnaissance aircraft, the tilt-wing MVSA-32J Umidori (Seagull). The availability of aircraft, especially the advanced capabilities of the VTOL Umidori, greatly expands the story lines by giving the characters mobility beyond the confines of the ship.

The Mirai and the Atago class

The JMSDF has produced an improved Kongō class which has a helicopter hangar but still does not carry helicopters on board. The first of the new destroyers, named Atago, was launched in 2005. The Atago class design is approximately nine meters longer and 500 tons heavier than that of the Kongō class,[4] closely resembling the Mirai’s alterations. However, since the manga Zipang was published in 2000, at the same time as or even before JMSDF had added the improved Kongō’s to their 5-year budget and years before the first keel was laid, it is unlikely that the Mirai was intended to be an Atago-class ship; the resemblance is more likely coincidence resulting from similar operational requirements. An improved "Flight IIA" version of the American Arleigh Burke class also includes a slightly lengthened hull and a hangar for two Seahawk helicopters.

The MVSA-32J Umidori (Seagull in English) is a fictional aircraft created for the anime series Zipang. In the story, it is a twin turboshaft engine, multi-mission Japan Maritime Self-Defense Force VTOL tilt-wing armed reconnaissance aircraft deployed aboard the destroyer Mirai.

The Umidori with wings in hover mode.

The MVSA-32J has two large, five-bladed propellers mounted on nacelles in its wings. The wings both tilt, for vertical take-off and landing (VTOL), and fold, for storage within the Mirai’s hangar. It appears that its engines are not in the wing nacelles, which are too small and do not have any air intakes. Air intakes and engine exhausts in the lower part of the fuselage indicate that the engines are located there, presumably connected to the propellers by some complicated mechanical linkage. The design of the Umidori appears to be strongly influenced by the V-22 Osprey.

The Umidori with wings in forward flight mode.

In the series, the Mirai’s crew refer to the aircraft as the “Seagull” but the characters from 1942 call it the “Umidori.”

The Tomahawk missile and the Mirai

In episode 22 of Zipang, the Mirai used a Tomahawk cruise missile to destroy the USS Wasp. The characters specifically identified this as the anti-ship variant and it is visually identical to the Tomahawk missile. Real JMSDF ships do not carry Tomahawks because Article 9 of the Japanese Constitution forbids offensive weapons of any kind. The use of the Tomahawk in the story suggests that in the near-future universe of Zipang, Japan had changed its policy on offensive weapons. 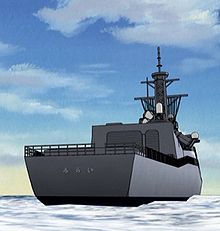 The Mirai’s aircraft hangar is visible in this aft view.

Over the course of the series, several different numbers are stated by the characters as the maximum range of the Mirai’s weapons. Early in the series, it is stated that the maximum range of their weapons is 270 miles (430 km). Later, when a Tomahawk is used, its range is stated as 310 miles (500 km). This is likely a case of inconsistency in use of nautical and statute miles; 270 nautical miles (500 km) is equal to 310.7 statute miles. The RGM/UGM-109B Tomahawk Anti-Ship Missile (TASM) actually had a range of 450 km, or approximately 281 statute miles and was retired in the early 1990s. In episode 14 it is stated that the RIM-7 Sea Sparrow is capable of traveling at 4900 yards per second. The technical specifications of the Sea Sparrow places its speed between 4200 and 4300km/h, which would be roughly 1300 yards per second.