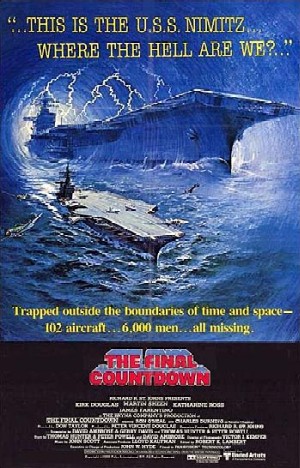 "The Final Countdown" is a 1980 about a modern that travels through time to just before the . It was directed by Don Taylor, and stars , , and .

This was the first appearance of the in a commercial film.

co-founder has a small role as Lt. Cmdr. Kaufman. He also worked as the associate producer, the experience on this film made him never want to deal with a major studio again [Quoted in "All I need to know about FILMMAKING, I learned from the Toxic Avenger", ISBN 0-425-16357-1]

*
*
*
* [http://www.spectrepublishing.com/FinalCountdown.html "The Final Countdown" Fansite]
* [http://www.mjyoung.net/time/countdow.html Analysis of the temporal anomalies in the film]
* http://www.pauliddon.net/F-14%20vs%20Zero.htm