The Starry Night (Dutch: De sterrennacht) is a painting by Dutch post-impressionist artist Vincent van Gogh. The painting depicts the view outside his sanitarium room window at night, although it was painted from memory during the day. Since 1941 it has been in the permanent collection of the Museum of Modern Art in New York City. Reproduced often, the painting is widely hailed as his magnum opus. 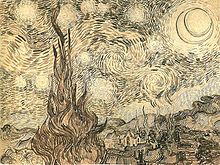 Reed pen drawing by van Gogh, executed after the painting

In mid-September 1889, following a heavy crisis which lasted from mid-July to the last days of August, he thought to include this "Study of the Night"[3] in the next batch of works to be sent to his brother, Theo, in Paris. In order to reduce the shipping costs, he withheld three of the studies ("above-mentioned – Poppies – Night Effect – Moonrise"). These three went to Paris with the shipment to follow.[4] When Theo did not immediately report its arrival, Vincent inquired again [5] and finally received Theo's commentary on his recent work.[6]

The center part shows the village of Saint-Rémy under a swirling sky, in a view from the asylum towards north. The Alpilles far to the right fit to this view, but there is little rapport of the actual scene with the intermediary hills which seem to be derived from a different part of the surroundings, south of the asylum. The cypress tree to the left was added into the composition.[7] Of note is the fact van Gogh had already, during his time in Arles, repositioned Ursa Major from the north to the south in his painting Starry Night Over the Rhone. 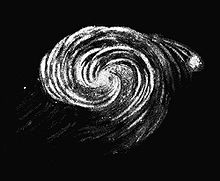 Sketch of the Whirlpool Galaxy by Lord Rosse in 1845, 44 years before van Gogh's painting

Van Gogh was not so happy with the painting. In a letter[3] to Theo from Saint-Rémy he wrote:

Later in this letter, Vincent referred once more to the painting: