The Church at Auvers

The Church at Auvers

The Church at Auvers was painted by Dutch post-impressionist artist Vincent van Gogh in 1890.

The Church at Auvers — along with other canvases such as The Town Hall at Auvers and several paintings of small houses with thatched roofs — are reminiscent of scenes from the northern landscapes of his childhood and youth.[1] A certain nostalgia for the north had already been apparent in his last weeks at Saint-Rémy-de-Provence: in a letter written a couple of weeks before his departure, he wrote "While I was ill I nevertheless did some little canvases from memory which you will see later, memories of the North"[2]

He specifically refers to similar work done back at Nuenen when he describes this painting in a letter to his sister Wilhelmina:[3] 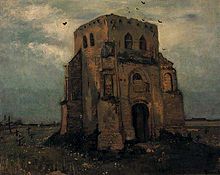 The "simple deep blue" was also used in Portrait of Adeline Ravoux, painted in the same short period in Auvers-sur-Oise.

The foreground of The Church at Auvers is brightly lit by the sun, but the church itself sits in its own shadow, and "neither reflects nor emanates any light of its own."[4] After Van Gogh had been dismissed from the evangelical career he had hoped to continue in the Borinage, he wrote to his brother Theo from Cuesmes in July 1880, and quoted Shakespeare's image from Henry IV, Part 1[5] of the dark emptiness inside a church to symbolize "empty and unenlightened preaching":[6] "Their God is like the God of Shakespeare's drunken Falstaff, 'the inside of a church'"[7]

The motif of diverging paths also appears in Wheat Field with Crows.

The Church at Auvers plays a prominent role in "Vincent and the Doctor", the tenth episode of the fifth series of the science-fiction television programme Doctor Who. In it, the painting depicts a strange creature (called a "Krafayis") at a window of the church, which signifies to the show's time-travelling protagonist, the Doctor, that something evil was lurking in Auvers-sur-Oise. Only when van Gogh himself, played by Tony Curran, defeats the creature at the church, does the painting revert back to its original, unaltered, state. It is interesting to note that the creature is later revealed to have been blind, with blindness to the colors and shapes of the world and sky (as Vincent saw them) being a reoccurring theme of the episode.[8]