The Buenos Aires Metro (Spanish: Subterráneo de Buenos Aires), locally known as Subte (Spanish pronunciation: [ˈsuβte], from subterráneo – 'underground' or 'subterranean') is a mass-transit system that serves the city of Buenos Aires, Argentina. The first station of this network opened in 1913, the first of its kind in South America, the Southern Hemisphere and the entire Spanish-speaking world. It is one of the busiest metro systems in the world.[2]

The network expanded rapidly during the early decades of the 20th century, but the pace of expansion fell sharply after the Second World War. In the late 1990s expansion resumed, with the planning of four new lines. However, the rate of expansion is largely exceeded by the transportation needs of the city and once again the network has become overcrowded.

At present, Buenos Aires is the only Argentine city with a metro system, but there is a project to build an underground system in the city of Córdoba (Córdoba Metro).[3] 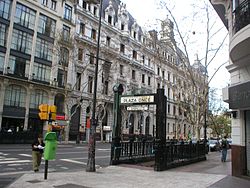 Discussions on the need to build an underground transportation system in Buenos Aires began in the late nineteenth century, alongside the tramway system. They operated from 1870 and in about 1900 were in a crisis exacerbated by the monopolization of the companies, a process initiated against the electrification of the system.

In this context, the first proposals for the building of an underground system were made, along with requests for government grants: first, in 1886, and several more in 1889, but the Ministry of Interior (Ministerio del Interior, in Spanish) denied the city administration the power to license building in the subsoil of the City. For this reason, subsequent drafts were submitted directly to this ministry.

When in 1894 it was decided to construct the Congress building in its present location, the subway idea was revived, as it might shorten the travel time between the Casa Rosada and the Congress (with the same purpose there were also plans to build an electric aerial tramway to go down the Avenida de Mayo). Miguel Cané, former Mayor of Buenos Aires (1892–1893), also expressed in 1896 the need to build an underground railway similar to the one in London.

But the various projects failed to raise capital due, according to Miguel Cané, "the reluctance of the English to provide the necessary funds for the construction".

The first subway line was opened on 1 December 1913 and was built by the Anglo-Argentine Tramways Company (Compañía de Tranvías Anglo-Argentina (CTAA), in Spanish) , which had been given permission to build in 1909. That line was made up of one of the existing sections of line A, linking the stations of Plaza de Mayo and Plaza Miserere. On 1 April 1914 the line was expand to Río de Janeiro station and on 1 July was extended to Primera Junta Station.

In 1912 the company Lacroze Hermanos won a concession to build another subway line. This line is the current line B and was inaugurated on 17 October 1930. In 1933 the Hispano-Argentina Society of Public Works and Finance (Hispano–Argentina de Obras Públicas y Finanzas (CHADOPYF), in Spanish) began construction of the other subway lines.[4]

The entire network was centralised and nationalised during the late 1930s under the management of the Transport Corporation of Buenos Aires (CTBA), which in 1952 was absorbed by the Buenos Aires Transport General Administration (AGTBA).

In 1963, the administration was dissolved and the subway network became the property of the Subterráneos de Buenos Aires (SBA) company (later SBASE). In 1994 the service was privatised and is now managed by Metrovías S.A. with the stations remaining the property of SBASE. 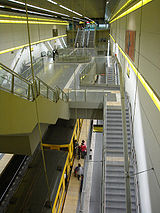 Humberto Iº station on the new line H

The current[update] network comprises six underground lines, labelled "A" to "E" and "H" and which are further identified by different colours, covering a total track length of 52 km. There is also one surface PreMetro E2 light rail line. Daily ridership is 1.7 million[5] and on the increase. With the current usage patterns, the entire system is overstretched, and during weekdays overcrowded and with insufficient services. An expansion program is planned, and it is expected to enlarge the network to 97 km by 2011.[6]

Fares are cheap (ARS 1.10 (around USD 0.29) and are in fact cheaper than the city buses. While tokens have been used in the past, at present, riders purchase either single-use or multi-use cards (called SubtePass) with a magnetic strip or use Contactless cards called Monedero which can be rechargeable with cash or linked to a bank account for automatic debit. Trains run from 5:00 until 22:45, every 3–6 minutes, depending on the line considered.[citation needed]

Stations are listed from East to West or North to South. Stations in gray have yet to open. Stations in bold are the current termini.

There are several projects to improve connections.[6] 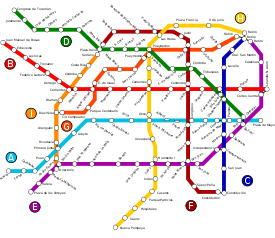 Lines according to the future expansion program

New line H and extensions to other lines are under construction

Line A is under construction towards the west from Carabobo: 2 km with 2 stations: San José de Flores, San Pedrito (previously Nazca) (2010).

Line B is being extended underground further west (2 km) from Los Incas to Echeverría and Juan Manuel de Rosas where transfer to the Ferrocarril Mitre will be provided.

Northern section connecting Corrientes to Retiro, has seven stations and is 3.8 km long.

The future expansion is based on the program Plan of New Lines:

, whose routes are already approved by the Legislature of the City. 39.3 km km will be added to the network, expanding it to about 97 km in total length and provide several stations with various interchanges and include north-south routes to create an appropriate network to avoid the city centre. The new lines will mean that more than two million citizens of Buenos Aires, or about 70% of the city's population will live within 400m of a metro station. The new lines will be distributed over 56 new stations.

Line F will run from Barracas to Plaza Italia and will include 16 new stations. The planned route length of this line is 10.8 km.

Line I will run Parque Chacabuco to Ciudad Universitaria with 18 new stations. The route length is 12.6 km. 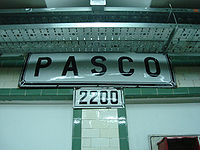 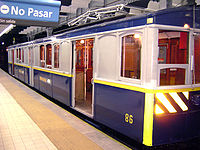 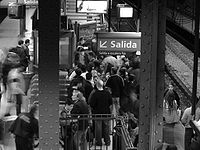 Line A Plaza de Miserere Station platforms, with transfer to the Once station on line H of the underground and rail connections to the Sarmiento suburban line 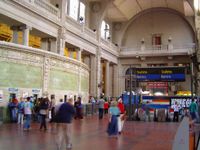 The Buenos Aires Metro has historically been characterized by murals and other artistic works in its stations, making a kind of museum throughout the system. These works, and a number of complete stations, are considered part of the cultural heritage of the city and several of them were declared National Historic Landmarks in 1997.[8]

Line A is world-famous because it still keeps its rolling stock running, making them the oldest subway coaches in commercial service in the world. They were built by La Brugeoise, et Nicaise et Delcuve, a Belgian rolling stock manufacturer established in the city of Bruges, between 1913 and 1919. Entirely made of wood, they were originally designed to run as subway as well as tramway cars, but they were adapted in 1927 to their current styling for underground service only. Since the 1940s, several plans have been made to replace them with newer rolling stock, but none of them has succeeded.[9]

Many stations are decorated with intricate ceramic tile work, some of it dating back to 1913 when the subway first opened for business. Featured artists include painters and reproductions by Quino, Molina Campos, Raúl Soldi, Rodolfo Medina and Jorge Schwarz. In addition they provide spaces for music and theater events.

The subway is featured in the 1996 science fiction film Moebius directed by Gustavo Mosquera. In the film, the circumstances surrounding the disappearance of a metro train are investigated by a topologist. The film is based upon the short story, "A Subway Named Möbius" that takes place in the Boston Subway.[10]

The PreMetro line E2 is a light rail system feeding the line E of the Buenos Aires Metro.

Línea Urquiza (in English: Urquiza Line) is a 25.5 km (16 mi) suburban electric commuter line originally designed to be part of the subway system, and operated by the subway operator Metrovías, in Buenos Aires, Argentina. It runs from the Federico Lacroze terminus in the barrio of Chacarita, to General Lemos terminus, Campo de Mayo in Greater Buenos Aires. The line is completely at grade (ground-level) and uses third rail current collection and, at present, is used by an average of 75,400 passengers daily and operates 20 hours a day, 7 days a week at 8 to 30 minute intervals.

In earlier times the line was planned to run into the centre of Buenos Aires through a long tunnel. But when the tunnel was finally built in 1930, it ended up as the B line subway, so that suburban passengers had to change at Federico Lacroze, named after its builder, about 6 km (3.7 mi) from the centre.