The original terminal, circa 1880. 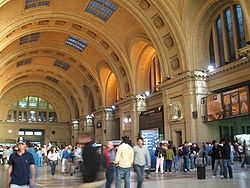 Main hall of the station. 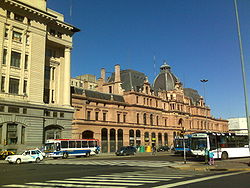 The front of the station as seen from Brasil street.

On 7 March 1864, in a ceremony attended by the president Bartolomé Mitre, construction began at Mercado Constitución, on the site of the present day terminus, as the British-owned Buenos Aires Great Southern railway company began building its first broad gauge line of 114 km as far as Chascomús. The first section of the line to Jeppener, Buenos Aires was opened on 14 August 1865 and during that same month a small terminal station at Mercado Constitución was opened to the public and renamed Plaza Constitución. Later that year in December the line to Chascomús was opened.

Between 1885 and 1887 the Plaza Constitución terminus was rebuilt and enlarged and between 1906 and 1907 further building work was carried out and extra platforms were added to cope with the increasing suburban traffic. In 1912 yet more platforms were added.

On 19 September 1925 a foundation stone for the present day terminus was laid by the Prince of Wales, later Duke of Windsor, during his official visit to Argentina. The original station was then rebuilt with fourteen platforms roofed over, modern hydraulic buffer stops and an imposing concourse which formed a massive main hall, one of the largest in the world, along the entire length of the site. Of the fourteen platforms, only two or three were normally used for mainline trains, leaving the rest for suburban services. To the east of the main station a large goods and parcels section with warehouses, offices and several sidings was built. The street frontage of the original station was left untouched due to financial constraints imposed towards the end of the rebuilding.

All southbound trains on the Roca line have their terminus at Constitución and the station is served by two railway companies:

Constitución is accessible by the C line of the city's subte metro and by numerous public bus services (including the colectivo 60 service), and by long-distance bus services.

The surrounding neighbourhood - part of Barrio Constitución - is characterized by low-rent residences for people from the provinces (or from neighboring Paraguay and Bolivia) who come to work in the city.

The station was the site of a riot on May 16, 2007, during the evening rush hour, which provoked debate and discussion in Argentina over railroad service and privatization. A crowded train broke down within walking distance of the station blocking the railway and the irate passengers from trains trapped at the station, after waiting for the train to be fixed and to move, walked to the platform, thus triggering the chaos. Around 25 people were injured, and a total of 16 were arrested and later released.[2]