Michigan Stadium, nicknamed "The Big House,"[5] is the football stadium for the University of Michigan in Ann Arbor, Michigan. Michigan Stadium was built in 1927 at a cost of $950,000 and had an original capacity of 72,000. Before playing football at the stadium, the Wolverines played on Ferry Field. Michigan Stadium is the largest stadium in the United States with an official capacity of 109,901.[6] The football game attendance often exceeds 111,000 when band members, stadium staff, and others are added. On September 10, 2011, 114,804 attended a game at Michigan Stadium between Michigan and the Notre Dame Fighting Irish, the largest crowd to see a college football game since 1948 and an NCAA single-game record. The current NCAA single-season average home attendance record was 111,175 per game set in 1999 at the stadium.[7]

Michigan Stadium is the third largest stadium in the world and the 31st largest sports venue including auto racing and horse racing tracks, among others.[8] The one "extra seat" in Michigan Stadium is said to be reserved for former athletic director Fritz Crisler, although its location is not specified.[9] Every home game since November 8, 1975 has drawn a crowd in excess of 100,000, an active streak of more than 200 contests.[10] "Football Saturdays" in Ann Arbor have a profound effect on the city, dramatically increasing traffic and business at local establishments. The size of the crowd in the stadium nearly matches the city's population of 114,000.

Michigan Stadium was designed with footings to allow the stadium's capacity to be expanded beyond 100,000. According to the University of Michigan Library's and Athletics Department's history of the stadium, Fielding Yost envisioned a day where 150,000 seats would be needed. To keep construction costs low at the time, the decision was made to build a smaller stadium than Yost envisioned but to include the footings for future expansion.[11]

Michigan Stadium is the site of the University of Michigan's main graduation ceremonies; renovations in April 2008 caused that year's ceremony to be moved to the Diag.[12]

On December 11, 2010, the "Cold War II", a Michigan versus Michigan State hockey game, took place at Michigan Stadium. The event was officially called "The Big Chill at the Big House", and over 100,000 tickets had been sold by May 6, 2010, when sales to the general public were stopped. The remaining seats were set aside for students. The attendance for the game was 104,073, smashing the previous record for a hockey game by nearly 25,000. 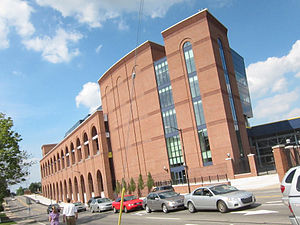 The new west side structure at Michigan Stadium, viewed from the southwest.

Michigan Stadium's size is not entirely apparent to outside observers, as it is constructed partially below grade, leaving only the upper 20 rows (in most sections) visible from the outside. The stadium's original capacity was 72,000, but Fielding Yost made certain to install footings that could allow for expansion up to 200,000 seats. Initially, all seating consisted of wooden bleachers. These were replaced with permanent metal seating in 1949 by Crisler, who was athletic director at the time. Longtime radio announcer Bob Ufer dubbed Michigan Stadium "The hole that Yost dug, Crisler paid for, Canham carpeted, and Schembechler fills every cotton-pickin' Saturday afternoon."[13] Since 1975, the stadium has held over 100,000 fans for every home game.[14] The game against Indiana University on October 25, 1975 was the last sub-100,000 attendance home game for Michigan.[14][15] Michigan's game versus Ball State University on November 4, 2006, was the 200th consecutive crowd of over 100,000 fans.[16] Traditionally, when the game's attendance is announced, the public address announcer (historically Howard King) thanks the fans for "being part of the largest crowd watching a football game anywhere in America".[17]

On October 1, 1927, Michigan played Ohio Wesleyan in the first game at Michigan Stadium, prevailing easily, 33–0. The new stadium was then formally dedicated three weeks later in a contest against Ohio State on October 22. Michigan had spoiled the formal dedication of Ohio Stadium in Columbus five years earlier and was victorious again, besting the Buckeyes 21–0 before a capacity crowd of 84,401. In 1930, electronic scoreboards were installed, making the stadium the first in the United States to use them to keep the official game time.[10]

From 1927 to 1968, the stadium's field was covered in natural grass. This was replaced with TartanTurf in 1969 to give players better traction. However, this surface was thought to be unforgiving on players' joints, and the stadium returned to natural turf in 1991. This too became problematic, as the field's below-surface location near the water table made it difficult for grass to permanently take root. The field was converted to FieldTurf, an artificial surface designed to give grass-like playing characteristics, in 2003.[18]

Before 1968, the football field had a policy of "No women or children allowed on the field." Sara Krulwich, now a photojournalist for The New York Times, was the first woman on the field.[19]

On September 9, 2006, attendees of Michigan's football game against the Central Michigan Chippewas endured the first weather delay in the stadium's history after lightning struck nearby during the first quarter.[20] The game was delayed for approximately one hour.

On March 11, 2008, as part of the settlement terms of a lawsuit filed against the university pursuant to the Americans with Disabilities Act, the university announced that the official capacity of the stadium would be reduced to accommodate additional wheelchair-accessible seating beginning with the 2009 season.[21]

On June 21, 2007, the University's Board of Regents approved a $226 million renovation and expansion project for Michigan Stadium which was completed in 2010. The project includes replacement of some bleachers, widening of aisles and individual seats, installing hand rails, and the addition of a new press box, 83 luxury boxes, and 3,200 club seats. The renovation plan garnered opposition from students, alumni, and fans around the country, which waned as the renovation neared external completion.[22]

A disabled-veterans group filed a federal lawsuit against the university on April 17, 2007, alleging that the design of the project did not meet federal standards for wheelchair-accessible seating.[23] In March 2008, the case was settled, with the university agreeing to add more accessible seating in place of current seating during the course of the renovation.

Michigan Stadium was rededicated on September 4, 2010, before Michigan's first home football game of the 2010 season against the University of Connecticut,[24] with a listed capacity of 109,901.[6]

After the renovation, the stadium continued to lack lights, although platforms for temporary lights were included in the design. In September 2010, a few days after the rededication, the University of Michigan's Board of Regents approved a plan to add permanent lights, at a cost of $1.8 million. The lights were first used at the men's hockey game on December 11, 2010. The first night football game in the stadium was on September 10, 2011, when the Wolverines defeated the Notre Dame Fighting Irish 35–31.[25]

With an attendance of 104,173, "The Big Chill at the Big House" set the record attendance for a hockey game.[29] The previous record of 77,803 was set in the opening game of the 2010 IIHF World Championship on May 7, 2010 at Veltins-Arena, a retractable-roof soccer stadium in Gelsenkirchen, Germany.[30]