Michigan Technological University (commonly referred to as Michigan Tech, MTU, or simply Tech) is a public research university located in Houghton, Michigan, United States. Its main campus sits on 925 acres (374 ha) on a bluff overlooking Portage Lake. Michigan Tech was founded in 1885 as the first post-secondary institution in the Upper Peninsula of Michigan, and was created to train mining engineers to operate the local copper mines.

The university's name has changed three times to reflect expansions of degree offerings. Science, technology, forestry and business have been added to the numerous engineering disciplines, and Michigan Tech now offers more than 130 degree programs though its five colleges and schools. US News and World Report ranked Michigan Tech's undergraduate program 115th in the nation based on peer assessment, student selectivity, financial resources and other factors.[5] Michigan Tech was also rated among the "Best in the Midwest" by The Princeton Review.[6]

Michigan Tech's athletic teams are nicknamed the Huskies and compete primarily in the NCAA Division II Great Lakes Intercollegiate Athletic Conference (GLIAC). The men's hockey team competes in Division I as a member of the Western Collegiate Hockey Association (WCHA), and has won three national championships. 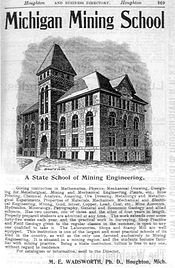 1895 advertisement for the Michigan Mining School

Michigan Tech was founded in 1885 as the Michigan Mining School.[7] Established by the state of Michigan to train mining engineers to operate the local copper mines, the school started with four faculty members and twenty-three students. A few years after the school's creation, enrollment grew to such a point that its name no longer reflected its purpose. The name was then changed to the Michigan College of Mines. This name lasted through World War I until 1925, but by this time the school had begun offering a wider variety of degrees and once again decided to change its name to the Michigan College of Mining and Technology. By 1931 enrollment had reached nearly 600. During the next few years, due to the Great Depression, money was scarce, causing department heads and even the president of the university, William Hotchkiss, to take pay cuts. Grover C. Dillman was president from 1935 to 1956. During this time, the school underwent many notable changes: a few of these include the construction of the Memorial Union Building and purchase of an ice rink and golf course. Around 1948, enrollment passed 2000 students total. In 1956, J. Robert Van Pelt became the new president of the university. He restarted many PhD programs and created a focus on research. This included the schools first analog computation class in 1956-1957.[8] In the final years of his presidency, the school changed from a college to a university, changing its name a final time to Michigan Technological University. The change from the Michigan College of Mining and Technology was necessary for two reasons, according to Van Pelt. First, the college had expanded too greatly and the current name was no longer an accurate title. Also, including "mining" in the name of the college was misleading.[9] The name Michigan Technological University was chosen in order to retain the nickname of Michigan Tech that had already been in use since 1927. Although engineering still accounts for some 59 percent of all enrollment as of fall 2010, the University now offers more than 130 degree programs. Along with the new name, Michigan Technological University, the school gained new constitutional status in 1964. The new status gave responsibility for control of the university to its Board of Control rather than legislature.[10] 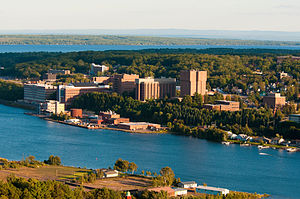 The main Michigan Tech campus is located mainly on US 41 in Houghton, Michigan. It is the safest campus in Michigan, and the third safest in the United States according to Reader's Digest.[11] The main part of campus is relatively small, and can be traversed in about 10 minutes. Many of the buildings are built up, as opposed to short and wide, which reduces the size of the campus.In addition, the offices of the Michigan Tech Fund are located in the Citizens Bank Building in Hancock.[12]

Faculty are involved in several distance education programs with clients such as General Motors.

The Portage Lake Golf Course opened for play in April 1902. In 1945 the members could no longer support the needs of the course and sold it to Michigan Tech for one dollar. Since then many improvements have been made such as the addition of another nine holes in 1969. Then in 1984 the new clubhouse was constructed. In 1996 a sprinkler system was installed to modernize the course and keep it playable. The Portage Lake Golf Course is located two miles (3 km) southeast of campus.

Michigan Tech is known for academic excellence in engineering, natural and physical sciences, computing, business and economics, technology, environmental studies, arts, humanities, and social sciences.[who?] The university is divided into five schools and colleges. The average overall ACT scores for incoming students is 26.4 in fall 2010,[16] compared to 21.2 nationally. The College of Engineering's environmental engineering, geological engineering, and mechanical engineering enrollments all rank in the top ten nationally.[17] The electrical engineering department uses an innovative "DSP First" curriculum found at only a few leading universities.[18] The cornerstone of this program is an introductory course in digital signal processing (DSP).

The student body consists of nearly 7,000 graduate and undergraduate students (Fall 2010)[3] and more than 450 academic faculty (Fall 2010).[2] As is historically true of engineering institutions, female enrollment at Michigan Tech is low. The male to female student ratio was 22:1 in 1960; since 1980 it has remained around 3:1. Michigan Tech's admissions office has enlisted female students and faculty to contact every admitted female applicant via telephone or personal letter in an attempt to increase female enrollment.[21] The Fall 2010 freshman class had a ratio of 3.1:1.[3]

Michigan Tech ranked 172nd of 600 US colleges and universities in research and development expenditures in 2007.[22] Michigan Tech ranks ahead of Michigan State, the University of Michigan, Wayne State, and benchmark universities RPI, Georgia Tech, Carnegie Mellon, and Notre Dame in invention disclosures per $10 million of research.[citation needed] Research expenditures exceeded $50 million in 2009.[23] 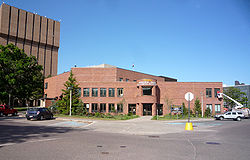 Students attending Michigan Technological University have a wide range of activities to participate in, whether or not they are living in the residence halls. In addition to the various small interest groups which form throughout the year, they participate in Greek Life, Student Organizations, and the Enterprise Program; many organize and attend varsity day events, such as K-Day, the Parade of Nations, and the Winter Carnival (which also attracts alumni from across the country); furthermore, there are motivational drives to raise student activity levels and involvement in the school community, typically for those without membership in a student organization. 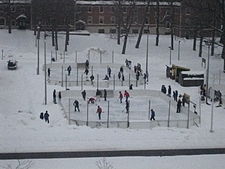 Michigan Tech has both an official fight song and an official Alma Mater. At most sporting events, however, both the "Engineer's Song" and "In Heaven There Is No Beer" are played by the Huskies Pep Band, and many students consider these to be the unofficial school songs. The "Blue Skirt Waltz" is played at home ice hockey games and is called the "Copper Country Anthem." During the song, the fans join arms and swing back and forth to the music.

There are over 68,000 Michigan Tech alumni living in all 50 states and over 100 countries. Some notable alumni include: