Memorial Stadium is located on the campus of the University of Nebraska-Lincoln in Lincoln, Nebraska, United States. It is the home of the Nebraska Cornhuskers football team.

The stadium holds an ongoing NCAA record of 317 consecutive sellouts, which began in 1962. When full, Memorial Stadium holds more people than any Nebraska city except Omaha and Lincoln. Because most fans wear red apparel, the stadium is referred to as the "Sea of Red" on game days. On September 26, 2009, a Memorial Stadium record crowd of 86,304 watched Nebraska play Louisiana-Lafayette on it's 300th consecutive sellout. 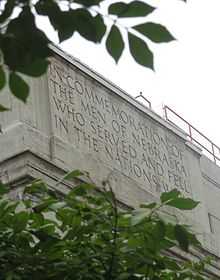 In the fall of 1922, a drive for $430,000 in funds to build a new football stadium was undertaken by faculty, students, alumni and friends of the university. Designed by John Latenser, Sr., a notable Omaha architect, the stadium was named Memorial Stadium to honor all Nebraskans who served in the Civil and Spanish-American Wars and the 751 Nebraskans who died in World War I. Later, the stadium would also honor the 3,839 Nebraskans who died in World War II; the 225 in Korea; and the 422 in Vietnam. Construction was completed in just over 90 working days; Memorial Stadium was dedicated on October 20, 1923.

Inscribed on the four corners of the stadium are the following words, written by former Nebraska professor of philosophy Hartley Burr Alexander:[3]

A statue of Nebraska coach Tom Osborne (now the school's athletic director) and former Nebraska quarterback Brook Berringer can be found outside the north side of the stadium. Berringer was a quarterback on Nebraska's 1994 and 1995 national championship teams who died in a plane crash in April 1996, just two days before the 1996 NFL Draft where he was expected to be an early/middle round pick.

The North Endzone addition, completed in 2006.

Memorial Stadium has undergone several phases of expansion and renovation since its original construction. In its original configuration, the stadium consisted of stands on the east and west sidelines. It was modeled after Ohio State's Ohio Stadium and had a seating capacity of around 31,000 (the east side is still in its original state; it has not been expanded, and the original architecture is still visible from the outside). A series of four additions between 1964 and 1972 enclosed the stadium by adding seats above the north and south end zones, more than doubling Memorial Stadium's seating capacity to nearly 74,000. A major renovation in 1999 added 42 luxury boxes above the west stands; the stadium was rededicated and the playing surface was renamed after retiring coach Tom Osborne. Osborne, known for his trademark modesty, was notably embarrassed by this gesture. 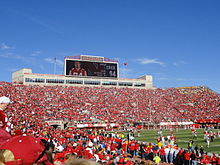 In 2004, construction began to renovate and expand the north end zone stands. Memorial Stadium now features an additional 13 luxury boxes above the north stands called the "Skyline Suites" and an additional 6,000 seats, increasing seating capacity to 81,067. Nebraska has the eighth-largest video screen in college football, at 33 feet (10 m) tall and nearly 40 yards (37 m) wide. (At the time it was completed in 2004, the scoreboard was the largest in a college football stadium.) Before the 2009 season two new high definition video screens were added on the northeast and northwest pillars of the original stadium, bringing the total number of high definition screens in the stadium to five. Concurrently, ribbon boards stretching the length of the field were installed along the east and west balconies of the stadium.

On October 15, 2010, the University announced that its Board of Regents had approved an expansion project that is anticipated to cost up to $65 million, increasing the stadium's listed seating capacity to more than 87,000. This expansion will be built on the stadium's east side, and will include over 2,000 seats in a covered and heated area, adjacent to an event area and terrace. 1,000 to 1,500 skybox seats will be part of the project, and the number of general admission seats will increase by almost 3,000.[4] The original east facade of the stadium, plus Gate 20, will be preserved within a new entrance lobby. The creation of the first standing room only area in Memorial Stadium is also in the plan; an area available for companies and private parties to host events on a game-to-game basis. In addition, the University plans to create a 20,000 square feet (1,900 m2) cutting edge athletics research facility in addition to another 20,000 square feet (1,900 m2) dedicated to campus research. Work is expected to be complete prior to the 2013 college football season.[5][6] The project was initially voted on by fans of the football program, who were asked if they preferred expanding the stadium capacity, or preserving the stadium's ongoing NCAA-record sell-out streak. The outcome of the polling was overwhelmingly in favor of expansion while maintaining the sellout streak.[7] 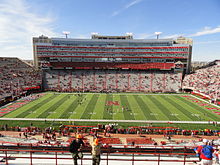 Memorial Stadium was the first college football stadium in Division I-A to install FieldTurf, in 1999. A second FieldTurf installation featuring an alternating light green/dark green "mowing" pattern every five yards was put in place prior to the 2005 season, to coincide with a removal of a fairly significant crown that had been in place for decades.

Starting in the early 1980s, portable lighting was occasionally installed for late-autumn games shown on national television, usually those against the University of Oklahoma.

The following are the top ten highest attended games at Memorial Stadium:[9]