Dominica is an island in the Caribbean Sea, located about halfway between the French islands of Guadeloupe (to the north) and Martinique (to the south). Its coordinates are 15 25 N, 61 20 W. It is known as "The Nature Island of the Caribbean" due to its spectacular, lush, and varied flora and fauna, which is protected by an extensive natural park system. It is the fourth largest island in the Caribbean with a population of people mainly from African descent.

The lowest point in the country is at sea level along the coast, and the highest is Morne Diablotins (1,447 m/4,747 ft). The extreme southwestern coast of the island includes a large collapsed submarine caldera. Portions of the exposed rim of this caldera form the southwestern tip of the island at Scott's Head. Natural resources include farming, hydropower and timber.

Geographically, Dominica is distinctive in many ways. The country has one of the most rugged landscapes in the Caribbean, covered by a largely unexploited, multi-layered rain forest. It is also among the Earth's most rain-drenched lands, and the water runoff forms cascading rivers and natural pools. The island, home to rare species of wildlife, is considered by many as a beautiful, unspoiled tropical preserve. According to a popular West Indian belief, Dominica is the only New World territory that Columbus would still recognize.

Dominica is the largest and most northerly of the Windward Islands. The island faces the Atlantic Ocean to the east and the Caribbean Sea to the west. Its nearest neighbors are the French islands of Guadeloupe, some 48 kilometres (30 mi) north, and Martinique, about 40 kilometres (25 mi) south. Oblong-shaped and slightly smaller than New York City, Dominica is 750 square kilometres (290 sq mi) in area, 47 kilometres (29 mi) in length, and 29 kilometres (18 mi) in width. Roseau, the nation's capital and major port, is favorably situated on the sheltered, southwestern coast.

The island's climate is tropical, moderated by northeast trade winds and heavy rainfall.

Dominica has a tropical wet climate with characteristically warm temperatures and heavy rainfall. Excessive heat and humidity are tempered somewhat by a steady flow of the northeast trade winds, which periodically develop into hurricanes. The steep interior slopes also alter temperatures and winds. Temperature ranges are slight. Average daytime temperatures generally vary from 26 °C (78.8 °F) in January to 32 °C (89.6 °F) in June. Diurnal ranges are usually no greater than 3 °C (5.4 °F) in most places, but temperatures dipping to 13 °C (55.4 °F) on the highest peaks are not uncommon.

Most of the island's ample supply of water is brought by the trade winds. Although amounts vary with the location, rain is possible throughout the year, with the greatest monthly totals recorded from June through October. Average yearly rainfall along the windward east coast frequently exceeds 5,000 mm (196.9 in), and exposed mountainsides receive up to 9,000 mm (354.3 in), among the highest accumulations in the world. Totals on the leeward west coast, however, are only about 1,800 mm (70.9 in) per year. Humidities are closely tied to rainfall patterns, with the highest values occurring on windward slopes and the lowest in sheltered areas. Relative humidity readings between 70 percent and 90 percent have been recorded in Roseau.

Hurricanes and severe winds, most likely to occur during the wettest months, occasionally are devastating. The most recent hurricanes of note were David and Frederic in August 1979 and Allen in August 1980. The 1979 hurricanes caused over 40 deaths, 2,500 injuries, and extensive destruction of housing and crops. Many agricultural commodities were destroyed during the 1980 storm, and about 25 percent of the banana crop was destroyed by strong winds in 1984.

Dominica is especially vulnerable to hurricanes as the island is located in what is referred to as the hurricane region. In 1979, Dominica was hit directly by Category 5 Hurricane David, causing widespread and extreme damage. On August 17, 2007, Hurricane Dean, a Category 1 at the time, hit the island. A mother and her seven-year-old son died when a landslide caused by the heavy rains fell onto their house.[1] In another incident two people were injured when a tree fell on their house.[2] Prime Minister Roosevelt Skerrit estimated that 100 to 125 homes were damaged, and that the agriculture sector was extensively damaged, in particular the banana crop.[3]

Dominica was the last island to be formed in the Caribbean. The island was created by volcanic action about 26 mya. It lies upon two opposing tectonic plates. This explains why an island a bit bigger than Martha's Vineyard has mountains approaching 5,000 feet (1,524 m).[4]

Geologically, Dominica is part of the rugged Lesser Antilles volcanic arc. The country's central spine, a northwest-southeast axis of steep volcanic slopes and deep gorges, generally varies in elevation from 300 to 1,400 metres (984 to 4,593 ft) above sea level. Several east-west trending mountain spurs extend to the narrow coastal plain, which is studded with sea cliffs and has level stretches no wider than 2,000 metres (6,562 ft). The highest peak is Morne Diablotins, at 1,447 metres (4,747 ft); Morne Trois Pitons, with an elevation of 1,423 metres (4,669 ft), lies farther south and is the site of the national park.

The interior features rugged mountains of volcanic origin. Volcanism is still quite evident on the island, the most popular examples being Dominica's Boiling Lake and "valley of desolation." The boiling lake (the world's second largest) is within a crater and is fed by a waterfall - the boiling is believed to be caused by the heat of a magma chamber beneath the lake. The valley of desolation is a sulfurous valley of volcanic vents and hot springs that inhibits significant plant growth - in stark contrast to the surrounding rain forest. Technically dormant today, this caldera last erupted in 1880.[4] The area that exploded on 4th January, 1880 was reported to be "fully nine square miles".[5] 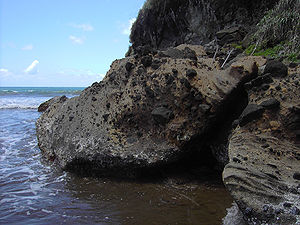 Dominica's rugged surface is marked by its volcanic past. Rock formations are mainly volcanic andesite and rhyolite, with fallen boulders and sharp-edged protrusions peppering slope bases. The light- to dark-hued clayey and sandy soils, derived from the rocks and decomposed vegetation, are generally fertile and porous. Only a few interior valleys and coastal strips are flat enough for soil accumulations of consequence, however. Although scores of mostly mild seismic shocks were recorded in 1986, volcanic eruptions ceased thousands of years ago. Sulfuric springs and steam vents, largely concentrated in the central and southern parts of the island, remain active, however. One of the largest springs, Boiling Lake, is located in the national park.

Dominica is water-rich with swift-flowing highland streams, which cascade into deep gorges and form natural pools and crater lakes. The streams are not navigable, but many are sources of hydroelectric power. Trafalgar Falls, located near the national park, is one of the most spectacular sites on the island. The falls has two twin waterfalls known as the mother and father. The falls form a natural pool where the natives and tourist come to enjoy a nice cool bath. The principal rivers flowing westward into the Caribbean are the Layou and the Roseau, and the major one emptying eastward into the Atlantic is the Toulaman. The largest crater lake, called Boeri, is located in the national park. There are 83 "significant" waterways on the island out of a total of 365 rills and brooks.[4]

There are 172 species of birds, including four species of hummingbird, broad-winged hawks, yellow-crowned night herons, and the brown trembler.[4] Some plants and animals thought to be extinct on surrounding islands can still be found in Dominica's forests.[citation needed]

The Sisserou parrot is Dominica's national bird and is indigenous to its mountain forests.

The Caribbean Sea offshore of the island of Dominica is home to many cetaceans. Most notably a small group of sperm whales live in this area year round. These are shy animals, but there is a good chance of seeing them if you go out on a calm day. Other cetaceans commonly seen in the area include pilot whale, fraser's dolphin, pantropical spotted dolphin and bottlenose dolphin. Less commonly seen animals include cuvier's beaked whale, false killer whale, pygmy sperm whale, dwarf sperm whale, risso's dolphin, common dolphin, humpback whale and Bryde's whale. This makes Dominica a destination for tourists interested in whale-watching.

Natural hazards: Flash floods are a constant threat; destructive hurricanes can be expected during the late summer months