Equilibrium is a 2002 American science fiction action film written and directed by Kurt Wimmer. It stars Christian Bale as John Preston, a warrior-priest and enforcement officer in a future dystopia where both feelings and artistic expression are outlawed and citizens take daily injections of drugs to suppress their emotions. After accidentally missing a dose, Preston begins to experience emotions which make him question his own morality and moderate his actions, while attempting to remain undetected by the suspicious society in which he lives. Ultimately he aids a resistance movement using martial arts, which he was taught serving the very regime he is to help overthrow.

The film co-stars Taye Diggs, Angus MacFadyen, Sean Pertwee, Emily Watson, David Hemmings, and Sean Bean. While the film did not perform well at the box office upon its initial release, it has since gained a cult following.

Equilibrium is set in the futuristic and dystopian city-state of Libria. After a Third World War devastated the Earth, a totalitarian state emerged whose ideology determined human emotion to be the root cause of conflict. All emotionally stimulating material is banned and "sense offenders" are ruthlessly persecuted. Illegal materials are rated "EC-10" for "emotional content" (a reference to the MPAA film rating system[1]), and destroyed by immediate incineration. All citizens of Libria are required to take regular injections of the emotion-suppressing drug Prozium.

Libria is governed by the Tetragrammaton Council, which is led by a reclusive figurehead known as "Father" (Sean Pertwee). Father never interacts with anyone outside the ruling council, but he is omnipresent on giant video screens throughout the city. The Tetragrammaton Council uses its police state apparatus to enforce conformity. At the pinnacle of Librian law enforcement are the Grammaton Clerics, who are trained in the deadly martial art of gun kata. The Clerics regularly raid the region outside the city known as "the Nether" where they locate and destroy emotionally stimulating materials such as art and music and pursue and execute the people using them. Despite their efforts, however, a resistance movement, known as "the Underground", has emerged in Libria.

The film's main protagonist is the high ranking Grammaton Cleric John Preston (Christian Bale). He is a widower whose wife, Viviana, was executed for "Sense Offense". After a raid on a group of rebels, Preston notices his partner, Errol Partridge (Sean Bean), taking a copy of Yeats poems instead of leaving it to be incinerated. He tracks down Partridge in the Nether and executes him. Before his death, Partridge says to Preston that all the consequences of feeling are a "cost he would pay gladly". The next morning Preston accidentally breaks his vial of Prozium, and as he is unable to receive a replacement he begins to experience emotions himself.

Preston is assigned the career-conscious Brandt (Taye Diggs) as his new partner. Together, they arrest Mary O'Brien (Emily Watson). Preston's emotional confusion is exacerbated during her interrogation. Without Prozium Preston finds it increasingly difficult to maintain his monotone and emotionless facade in front of his son and his suspicious partner. Preston falls in love with the imprisoned Resistance member Mary, and he also feels remorse for having killed Partridge. He eventually contacts the Resistance and is summoned before Vice-Counsel DuPont (Angus Macfadyen) for suspicious behavior. DuPont tells him to redouble his efforts to exterminate the Resistance and to find the traitor among the clerics. The Resistance meanwhile convinces him to assassinate Father to set off a revolution. Their plan to disrupt Prozium production through sabotage will then lead to an uprising of the emotionally-awakened populace.

As Preston unsuccessfully attempts to stop Mary O'Brien's execution he is caught breaking down in a wave of emotions by Brandt, who arrests him and brings him before the Vice-Counsel. Having convinced DuPont that his colleague is the real traitor, Preston rushes home to destroy the evidence of his nonconformity and finds his son as an unexpected ally.

As part of a plot by the Underground, the leaders of the Resistance then turn themselves in to grant Preston an audience with Father. Father turns out to be Vice-Counsel DuPont, who also does not take Prozium. Preston goes on a rampage, shooting his way to DuPont's office, which is filled with artwork and ornate furniture. It also becomes clear from DuPont's choice of words that he, too, has been reading the poems of Yeats. DuPont taunts him, asking Preston how it felt to betray the Underground. Preston kills first an army of guards then Brandt, with a katana. Finally Preston and DuPont face each other in a gun kata battle in which Preston emerges victorious. DuPont tries to convince Preston to spare him, asking if taking his life is worth the emotional cost knowing he is killing someone who is "feeling" and knows how beautiful life can be. Preston repeats the last words of Partridge and announces that he gladly will pay the cost, shooting DuPont in the chest. He then destroys the propaganda machines that have indoctrinated the people of Libria while the Underground detonates bombs and takes control of the city. The film ends with Preston holding O'Brien's red ribbon, smiling.

Gun Kata is a fictional gun-fighting martial art discipline that is a significant part of the film. It is based upon the premise that, given the positions of the participants in a gun battle, the trajectories of fire are statistically predictable. By pure memorization of the positions, one can fire at the most likely location of an enemy without aiming at him in the traditional sense of pointing a gun at a specific target. By the same token, the trajectories of incoming fire are also statistically predictable, so by assuming the appropriate stance, one can keep one's body clear of the most likely way of enemy bullets. 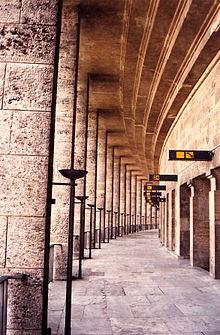 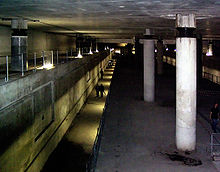 The Hall of Enforcement in Equilibrium, represented by the Subway station under the Reichstag Building.

Most of the filming used locations in Berlin, due to its unique mixture of fascist and modern architecture. According to the visual effects supervisor Tim McGovern who worked alongside Kurt Wimmer, the fascist architecture was chosen "to make the individual feel small and insignificant so the government seems more powerful." In addition, the modern architecture that is also found in Berlin, emphasizes the futuristic and stolid appearance of the city state of Libria. Moreover, while the city state of Libria has thick walls represented by an abandoned fortress-like East German military base, the exterior of the city is filmed in the decrepit neighborhoods of East Germany, where many of the surviving rebels reside. In addition to the geographic location, a few European art directors also made substantial contributions to the production.[4]

Although a science-fiction movie, Wimmer intentionally avoided using futuristic technology that can become obsolete, and he also decided to set his story in an indeterminate future. “I wanted to create more of an alternate reality than get caught up in the gadgetry of science fiction,” he explains. “In fact, there’s no technology in Equilibrium that doesn’t already exist. It’s more like a parallel universe, the perfect setting for a parable.” [4]

The film received mixed reviews from critics. The review aggregator Rotten Tomatoes reported that 37% of critics gave the film positive reviews, based on 83 reviews, with the consensus being "Equilibrium is a reheated mishmash of other sci-fi movies."[6] Metacritic reported the film had an average score of 33 out of 100, based on 22 reviews.[7] The New York Times dismissed Equilibrium for having heavily borrowed from Fahrenheit 451, Nineteen Eighty-Four, Brave New World, and other science-fiction classics.[8] Roger Ebert, however, awarded the film 3 stars out of 4, noting that "Equilibrium would be a mindless action picture, except that it has a mind. It doesn't do a lot of deep thinking, but unlike many futuristic combos of sf and f/x, it does make a statement."[9]

Explaining the apparent rift between critical and fan reaction Wimmer claimed in a Dreamwatch magazine interview that 'the paying customers seemed to get it', and in contrast, the critics 'didn't seem to see that the film had a different message than' Fahrenheit 451 and 1984.[10] In a slightly more emotional statement during a Sci Fi Dimensions interview, Wimmer implied that he values fan reaction above critical reception: 'Why would I make a movie for someone I wouldn't want to hang out with? Have you ever met a critic who you wanted to party with? I haven't.'[11]

The film, with an estimated production budget of $20 million, was a box office flop and only made $1.2 million in the United States (showing in only 301 theatres at its widest release), and another $4.1 million in the rest of the world for a total of $5.3 million.[12]