The katana (刀?) is one of the traditional Japanese swords (日本刀, nihonto?) worn by the samurai class of feudal Japan, also commonly referred to as a "samurai sword",[1]

The katana is generally defined as the standard size moderately curved (as opposed to the older "tachi" style featuring more curvature) Japanese sword with a blade length greater than 60 cm (23.6 inches).[3]

With a few exceptions katana and tachi can be distinguished from each other if signed, by the location of the signature (mei) on the tang (nakago). In general the mei should be carved into the side of the nakago that would face outward when the sword was worn. Since a tachi was worn cutting edge down, and the katana was worn cutting edge up the mei would be in opposite locations on the nakago of both types of swords.[4]

The katana is characterized by its distinctive appearance: a curved, slender, single edged blade, circular or squared guard, and long grip to accommodate two hands.[3] It has historically been associated with the samurai of feudal Japan, and has become renowned for its sharpness and cutting ability.

In the strictest sense the term katana in Japanese is applied to any kind of single-edged sword, of any origin, and does not necessarily refer to a Japanese sword.

"Katana" was originally used as a general term for a single-edged sword having a "sori" or curvature of the blade. While the "sugata" or form can take many shapes, including double edged, the term is now used incorrectly to describe nihontō that are 2 shaku (606 mm / 24 in) and longer, also known as "dai" or "daito" among Western sword enthusiasts.

This distinguishes them from the straight-bladed chokutō, which was brought from China by way of Korea.[5] The chokutō is speculated to have been the first "sugata" type the katana took on, being modeled after the imported swords. This emergence of the first nihontō took place the same time period as the beginning of Japanese feudalism and recognition of the daimyo or "great family" in the late ninth century.[5]

Pronounced kah-ta-nah, the kun'yomi (Japanese reading) of the kanji 刀, originally meaning dao (sword) or knife/saber in Chinese, the word has been adopted as a loanword by the Portuguese language.[6] In Portuguese the designation (spelled catana) means "large knife" or machete.[6] As Japanese does not have separate plural and singular forms, both "katanas" and "katana" are considered acceptable forms in English.[7]

Another term, Daikatana, is a pseudo-Japanese term meaning "large sword", formed by a mistaken reading of the kanji 大刀 (Japanese: daitō), derived from the Chinese dadao. The reading mistake comes from the different ways Japanese Kanji can be read, depending on their combination or not in a word. It has been used in some (English-language) fictional works to represent a kind of large katana; the video game Daikatana, for example used this pseudo-term as its title. The correct name of this type of weapon is tachi (太刀 – note the extra stroke, and different reading of 刀), and is different from ōtachi and nodachi.

Meibutsu (noted swords) is a special designation given to sword masterpieces which are listed in a compilation from the 1700s called the "Kyoho Meibutsucho". The swords listed are Koto blades from several different provinces, 100 of the 166 swords listed are known to exist today with Soshu blades being very well represented. The "Kyoho Meibutsucho" also listed the nicknames, prices, history and length of the Meibutsy with swords by Yoshimitsu, Masamune, Yoshihiro, and Sadamune being very highly priced.[8] 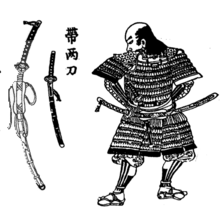 A Japanese Edo period wood block print of a samurai with a tachi.

The katana evolved as a more sleek and compact alternative to the tachi. Its origins go at least as far back as the Kamakura Period, with several blades dated from that time residing in various national repositories.

Its growth in popularity is believed to have been due to the changing nature of close-combat warfare. The quicker draw of the sword was well suited to combat where victory depended heavily on fast response times. The katana further facilitated this by being worn thrust through a belt-like sash (obi) with the bladed edge facing upwards. Ideally, samurai could draw the sword and strike down the enemy in a single motion.[5] Previously, the curved tachi had been worn with the edge of the blade facing down and suspended from a belt.[3][5]

The katana was often paired with a similar smaller companion sword, such as a wakizashi or it could also be worn with the tantō, an even smaller similarly shaped sword. The pairing of a katana with a smaller sword is called the daishō. The daisho could only be worn by samurai and it represented the social power and personal honor of the samurai.[3][5][9] 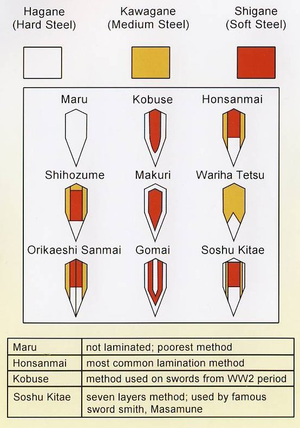 The authentic Japanese sword is made from a specialized Japanese steel called "Tamahagane"[10] which consist of combinations of hard, high carbon steel and tough, low carbon steel.[11] There are benefits and limitations to each type of steel. High-carbon steel is harder and able to hold a sharper edge than low-carbon steel but it is more brittle and may break in combat. Having a small amount of carbon will allow the steel to be more malleable, making it able to absorb impacts without breaking but becoming blunt in the process. The makers of a katana take advantage of the best attributes of both kinds of steel. The maker begins by folding and welding pieces of high and low carbon steel several times to work out most of the impurities. The high carbon steel is then formed into a U-shape and a billet of soft steel is placed in its center. The resulting block of steel is then drawn out to form a rough blank of the sword. At this stage it is only slightly curved or may have no curve at all. The gentle curvature of a katana is attained by a process of quenching; the sword maker coats the blade with several layers of a wet clay slurry which is a special concoction unique to each sword maker, but generally composed of clay, water, and sometimes ash, grinding stone powder and/or rust. The edge of the blade is coated with a thinner layer than the sides and spine of the sword, then it is heated and then quenched in water (some sword makers use oil to quench the blade). The clay slurry provides heat insulation so that only the blade's edge will be hardened with quenching and it also causes the blade to curve due to reduced lattice strain along the spine. This process also creates the distinct swerving line down the center of the blade called the hamon which can only be seen after it is polished; each hamon is distinct and serves as a katana forger's signature.[5]

The hardening of steel involves altering the microstructure or crystalline structure of that material through quenching it from a heat above 800 °C (1,472 °F) (bright red glow), ideally no higher than yellow hot. If cooled slowly, the material will break back down into iron and carbon and the molecular structure will return to its previous state. However, if cooled quickly, the steel's molecular structure is permanently altered. The reason for the formation of the curve in a properly hardened Japanese blade is that iron carbide, formed during heating and retained through quenching, has a lesser density than its root materials have separately.[5]

After the blade is forged it is then sent to be polished. The polishing takes between one and three weeks. The polisher uses finer and finer grains of polishing stones until the blade has a mirror finish in a process called glazing.[12] This makes the blade extremely sharp and reduces drag making it easier to cut with. The blade curvature also adds to the cutting power.

The katana's unique design and in particular its sharpness require quite a few specialized precautions to handle it. Failure to observe these precautions can easily lead to damage to the weapon or severe injury.

If mishandled in its storage or maintenance, the katana may become irreparably damaged. The blade should be stored in its sheath, curve down and edge facing upward to maintain the edge. It is extremely important that the blade remain well-oiled, powdered and polished, as the natural moisture residue from the hands of the user will rapidly cause the blade to rust if not cleaned off. The traditional oil used is choji oil (99% mineral oil and 1% clove oil for fragrance). Similarly, when stored for longer periods, it is important that the katana be inspected frequently and aired out if necessary in order to prevent rust or mold from forming (mold may feed off the salts in the oil used to polish the katana).[13]

As of April 2008, the British government added swords with a curved blade of 50 cm (20 in) or over in length ("the length of the blade shall be the straight line distance from the top of the handle to the tip of the blade") to the Offensive Weapons Order.[14] This ban was a response to reports that Samurai swords were used in more than 80 attacks and 4 killings over the 4 preceding years.[15] Those who violate the ban would be jailed up to six months and charged a fine of £5,000. Martial arts practitioners, historical re-enactors and people currently possessing such swords may still own them. The sword can also be legal provided it was made in Japan before 1954, or was made using traditional sword making methods. It is also legal to buy if it can be classed as a 'martial artist's weapon'.[16] This ban applies to England, Wales, Scotland and Northern Ireland. This ban was amended in August 2008 to allow sale and ownership without license of 'traditional' hand-forged katana.

However the sale of real katanas and imitation katanas with a straight edge remain unaffected by this law bringing up cause for concern to what it's purpose actually is.

As of September 2009, the Republic of Ireland introduced similar laws to the United Kingdom restricting the ownership of swords and other weapons.