Right-wing populism is a political ideology that rejects existing political consensus and combines laissez-faire liberalism and anti-elitism. It is considered "right-wing" because of its rejection of social equality and government programs to achieve it, its opposition to social integration, and its nativist overtones. It is considered populism because of its appeal to the "common man" as opposed to the elites.[1]

From the 1990s right-wing populist parties became established in the legislatures of various democracies including Canada, Norway, France, Israel, Russia, Romania and Chile, and entered coalition governments in Switzerland, Austria, the Netherlands, New Zealand and Italy.[2] Although right-wing movements in the U.S. have been studied separately, where they are normally called "radical right", some writers consider them to be the same phenomenon.[3] Right-wing populism is distinct from the historic Right, which had been concerned with preserving the "status quo", and mostly do not have roots in their political parties.[4]

Classification of right-wing populism into a single political family has proved difficult, and it is not certain whether a meaningful category exists, or merely a cluster of categories, since the parties differ in ideology, organization, and leadership rhetoric. Also, unlike traditional parties, they do not belong to international organizations of like-minded parties, and they do not use similar terms to describe themselves.[5] One commonality though is that they are more right-wing than other political parties on the left-right axis.[6] 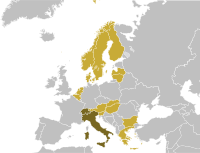 European national parliaments with representatives from right-wing populist parties in 2010. In dark brown, those in government.

Piero Ignazi divided right-wing populist parties, which he called extreme right parties, into two categories: traditional right-wing parties that had developed out of the historic Right, and post-industrial parties that had developed independently. He placed the former Italian Social Movement, the Italian Tricolour Flame, the National Democratic Party of Germany. the German People's Union, the former Dutch Centre Party, the British National Party, and the Belgian Vlaams Blok in the first category. He placed the French National Front, the German Republicans, the Dutch Centre Democrats,the Belgian Front national, the Freedom Party of Austria, the Danish Progress Party, the Norwegian Progress Party, and the Swedish New Democracy in the second category.[9]

Right-wing populist parties in the English-speaking world include the UK Independence Party,[10] the former Reform Party of Canada,[11] Australia's One Nation,[12] and New Zealand First.[13]

The National People's Front (Εθνικό Λαϊκό Μέτωπο) was formed in 2008 on the platform of maintaining Cypriot identity, opposition to further European integration, immigration, and the status quo that remains due to Turkey's invasion of a third of the island (and the international community's lack of intention to solve the issue). Its members have been frequently attacked and imprisoned due to their political views.

In the early 1970s the home of the strongest right wing populist party in Europe was in Denmark, in the Progress Party.[14] In the 1973 election it received almost 16% of the vote. In the years following its support dwindled away, but was replaced by the Danish People's Party in the 1990s, which has gone on to be an important support party for the governing Liberal-Conservative coalition in the first decade of the 21st century. The DPP has emphasised ethnic nationalism to an extent that the Progress Party never did, and is more supportive of elements of state intervention in the economy and the welfare state.

In Weimar Germany, radical right-wing populism played a role in mobilizing middle class support for the Nazi Party.[15] In this case, distressed middle–class populists during the pre-Nazi Weimar period mobilized their anger at government and big business. The Nazis "parasitized the forms and themes of the populists and moved their constituencies far to the right through ideological appeals involving demagoguery, scapegoating, and conspiracism".[16] According to Fritzsche:

The Nazis expressed the populist yearnings of middle–class constituents and at the same time advocated a strong and resolutely anti-Marxist mobilization....Against “unnaturally” divisive parties and querulous organized interest groups, National Socialists cast themselves as representatives of the commonwealth, of an allegedly betrayed and neglected German public....[b]reaking social barriers of status and caste, and celebrating at least rhetorically the populist ideal of the people’s community...[17]

The German Republicans had seats in the European parliament in 1983. In the 2000s, the Republicans' support eroded in favour of the far right National Democratic Party of Germany, which in 2005 held 1.6% of the popular vote (regionally winning up to 9%).

In the Netherlands, right-wing populism won a minor representation in the 150-seat House of Representatives in 1982, when the Centre Party won a single seat. During the 1990s, a splinter party, the Centre Democrats, was slightly more successful, although its significance was still marginal. Not before 2002 did a party considered right-wing populist break through in the Netherlands, when the Pim Fortuyn List won 26 seats and subsequently formed a coalition with the VVD and CDA. Its success was however short-lived, and the coalition broke up already in 2003, and the party went into steep decline until it was dissolved.

Since 2006, the Party for Freedom (PVV) has been represented in the House of Representatives. Following the 2010 general election, it has been in a pact with the right-wing minority government of VVD and CDA after it won 24 seats in the House of Representatives. The party is Eurosceptic and plays a leading role in the changing stance of the Dutch government towards European integration, as they came second in the 2009 European Parliament election, winning 4 out of 25 seats. The party's main programme revolves around strong criticism of the islam, but broadened to all other fields as the party grew to its current semi-governmental state.

The Norwegian Progress Party (FrP) is commonly considered a right-wing populist party.[18][19] From 2001 to 2005, the party tolerated Kjell Magne Bondevik's centre-right minority government. In the 1997, 2005, and 2009 parliamentary elections, the FrP was the second-largest Norwegian party by votes.

In Switzerland the right-wing populist Swiss People's Party reached an all-time high in the 2007 elections. In Switzerland, radical right populist parties held close to 10% of the popular vote in 1971, were reduced to below 2% by 1979, and again grew to more than 10% in 1991. Since 1991, these parties (the Swiss Democrats and the Swiss Freedom Party) have been absorbed by the Swiss People's Party, whose aggressively right-wing, populist campaign catapulted it to 29% of the popular vote in 2007, the highest vote ever recorded for a single party throughout Swiss parliamentary history.

Moore (1996) argues that "populist opposition to the growing power of political, economic, and cultural elites" helped shape "conservative and right-wing movements" since the 1920s.[20] The Tea Party movement of 2009–present had been characterized as "a right-wing anti-systemic populist movement" by Rasmussen and Schoen (2010). They add, "Today our country is in the midst of a...new populist revolt that has emerged overwhelmingly from the right -- manifesting itself as the Tea Party movement."[21] The New York Times reports, "The Tea Party movement has become a platform for conservative populist discontent".[22]