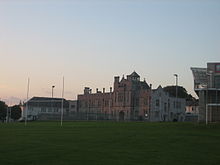 Plymouth College (PMC) is a co-educational independent school in Plymouth, Devon, England, for day and boarding pupils from the ages of 11 to 18. It was founded as a boys' school in 1877 and became coeducational in 1995.

The school was established in 1877 and in 1896 it bought out its older rival Mannamead School (founded in 1854), and was temporarily known as Plymouth and Mannamead College (hence the surviving abbreviation PMC).[3] The school's motto, Dat Deus Incrementum - God Gives The Increase, is the same as that of Westminster School, Marlborough College and Tonbridge School. In 1976, the first girls were admitted to the school's sixth form. It became fully coeducational in 1995, which also saw the end of Saturday morning lessons. In 2004, the school absorbed St Dunstan's Abbey School, a local but older independent school for girls. The combined school is still known as Plymouth College and remains at Ford Park, near Mutley Plain, just north of the city centre. The preparatory school is a mile south-west within the gated Millfields complex at Stonehouse.

Plymouth College is an independent school for pupils from the ages of 11 to 18. Its headmaster is Dr Simon Wormleighton, who is a member of the Headmasters' and Headmistresses' Conference. The school has a non-selective intake but admission is by way of its annual entrance examination at the age of 11, or by way of Common Entrance at 13, although applications are considered at any other times and are not unusual at the beginning of GCSE courses and the sixth form.

The school offers the International Baccalaureate as the principal sixth-form (years 12 and 13) option, running alongside A level courses. The potential merits and practicalities of the Cambridge Pre-U examination are under continuing review by the governors.

The school has four houses named after past influential masters and headmasters:

Two other houses used to exist but were dissolved and the pupils distributed between the existing ones. This was to increase the strength of the competition. The older houses were College (Purple) and Thompson's (Black). Before 1953, there were four houses (College (black), Palmer's (white), Sargent's (blue) and Thompson's (green). In 1953, two further houses were created (Chaytor's (purple) and Dale's (yellow)). Up to at least 1981, the colours appeared only as the background to the badge on the school cap.

The houses compete against each other throughout the year in a range of activities for the Forsyth Cup.

Boarders at the school, of which about 40% are from abroad, are accommodated in two houses: College House (previously split into Colson House and Mannamead House), situated at Ford Park, and Captain's House for those in the Elite Swimming Programme, near the preparatory school site.

There has been a preparatory school on various Plymouth sites since the school's foundation; it currently accepts children aged 3 to 11, with a roll in excess of 300. In 2005, the prep schools of Plymouth College and St Dunstans's Abbey combined to form Plymouth College Preparatory School, based at the St Dunstan's site.

The school also has a CCF (Combined Cadet Force). Entry is voluntary and takes place at Year 10 for boys and girls. Service is for two years initially, but NCOs are chosen from those cadets who stay into the sixth form. There are three sections from which to choose: Army, Navy and RAF.

The school is involved with a wide range of competitive sports with impressive results and is amongst the top swimming schools in the country.

The Elite Swimming programme has produced pupils who have competed nationally and internationally, breaking over fifty British and English records. Cassandra Patten won a swimming bronze at the 2008 Olympics. The number of pupils who have been selected to swim for England and Great Britain is now well into double figures and the swimming programme is offered in a partnership with the Plymouth Leander Swimming Club.[2]

As well as swimming, the school also has an elite modern pentathlon and fencing academy and has a dedicated on-site shooting range with full facilities. The running club or "Pumas" practise on and off site and the show jumping team practise at established stables within easy reach of the College.

The rugby team has also had some great successes in the recent past, with the 2008/2009 rugby team losing only one match, to Truro College, the eventual winners of the Daily Mail cup. The cricket team has also performed to a high standard, beating the famous Marylebone Cricket Club (MCC) both times in the last two seasons. The only school in England to do so. The current rugby captain is Jamie Cronk and the cricket captain is Jake Luffman. The hockey team was captained by Edward Knight, though they have not met with the same success as the two primary school sports.

The Whiteworks Outward Bound centre on Dartmoor has a 20 bed bunkhouse[4] and the school owns further grounds featuring rugby and cricket pitches at Delgany, Derriford, about two miles north of the Ford Park campus.

Plymouth College has the reputation of being one of the best business schools in the UK. It has had the highest scoring student in the UK at A level in 2003, 2004, 2005, 2007, 2008, 2009, 2010 and the highest performing business student in the UK at GCSE in 2004, 2006 and 2010. In addition to this it has also had a further 20 students in the national top twenty at A level and GCSE during the last 10 years. The department has also become a national leader in financial literacy and students now study both the Certificate (CeFS) and Diploma (DipFS) in Financial Studies. The department was awarded two educational excellence awards in 2008 and 2009 for its work in this field by the ifs:school of finance. The Business Department at the College has also won the CIMA Management Competition (3 times), The Young Business Writer of the Year, The Share Forecast Challenge, Make Your Mark (2 times), Student Investor (2 times) and Young Enterprise, making it the most successful school in the UK in the field of business/ enterprise competitions. Most recently, Ecovation, a business set up by pupils in the Sixth Form, was awarded Youth Social Enterprise of the Year by Social Enterprise UK. Business and Economics teacher Jonathan Shields also won the secondary school teacher of the year prize in 2010 for his work in making the business/economics department the national leader.

Various scholarships and bursaries are available for high achievers and those with proven potential in academic, sporting and other fields.

The previous Labour British Government and the Charity Commission indicated that independent schools would lose their charitable status if they could not clearly demonstrate that in addition to having high fees and exceptional facilities they also provide a measurable benefit to the local community and admit or provide places and education for the poor. Plymouth College facilities are widely used by local organisations, bursaries and scholarships are available and there is an evolving pattern of outreach and links with the city and community.[2] The present coalition government has yet to indicate its position.

Former pupils of Plymouth College are known as OPMs (Old Plymothians and Mannameadians). Former pupils of St Dunstan's are now included. Some of those who have come to public attention:

The OPM Club has rooms on the campus including a large bar and its own catering facilities with a balcony overlooking the cricket pitches and seaward.