Devonport High School for Boys is a Grammar School and Type 2 Academy, for boys aged 11 to 18, in Plymouth, Devon, England. It has around 1100 pupils. Its catchment area includes southwest Devon and southeast Cornwall as well as Plymouth. Pupils are accepted on the basis of academic aptitude.

The school was founded by Alonzo Rider on Albert Road, Devonport in January 1896 to meet the needs of boys in Plymouth and district seeking a career in the Navy, as engineers and civil servants.

In 1906 the Devonport Borough Council took over the school and over the next thirty years it continued to teach boys who came from the city or in by train from the Tamar Valley and Cornwall. Old Boys went on to careers both locally and nationally – and especially in the MoD. In 1939 the school was evacuated to Penzance because of World War Two and in 1945 returned to the present site, the former Stoke Military Hospital on Paradise Road, which had been built in 1797.[citation needed] A book by former student and teacher Henry Whitfield called A Torch in Flame, chronicles the history of the school from its founding to the death of headmaster Dr Cresswell in 1974. Since 1904, there has also been an annual School Magazine made by pupils with the purpose of keeping both; student, parents and Old Boys informed about developments and information concerning the school.

In 2002, the Department for Education and Skills (DfES) designated the school as one of the first four specialist engineering colleges of the UK. In 2006 it was judged to be a High Performing Specialist School (HPSS) and has rebid successfully for a second 4 year period of Engineering Specialism. In April 2007, it took up a second specialism in languages. After the OFSTED inspection in October 2007, the school successfully gained redesignation for Engineering and, with its HPSS status re-affirmed, successfully applied a third specialism "Applied Learning" which commenced during 2009. This specialism encourages subject teaching to make reference to relevance in the world of work.

The school was recently inspected again in February 2011, and was designated as an "Outstanding" school, paving the way for the school's conversion to "Type Two" Academy Status in early March 2011, under the Coalition Government's Academy scheme.

The school's academic performance can be assessed on the UK government's Department for Education and Skills (DfES) website.[1]

Pupils' technical achievements include building the fastest CO2-powered model formula one car in the South West England heats of the F1 In Schools competition 2004-2005. Cars in this competition are designed with Computer Aided Design software and built from balsa wood using Computer Aided Manufacture. DHSB's "Team Odyssey" entered the lower 11-14 age group. Their vehicle traveled 20 metres in 1.187 seconds, averaging over 60 kilometres per hour. Despite being the fastest in both age groups they did not qualify for the national finals, losing marks in the presentation section. This competition was re-entered in 2005-2006, with Black Future and Next Generation. At the regional finals in Yeovil, Black Future got a time of 1.107 seconds with Next Generation being slightly slower. Both teams went through to the national finals held in the NEC, Birmingham, where Black Future won the trophy for the fastest car nationally and Next Generation again being slightly slower, but with the second fastest car in United Kingdom. This year they again entered two teams: Fusion and Pulse. Fusion had the second fastest car in the south-west, but unfortunately did not qualify for the national finals. Pulse however, entered into a more complex class and beat the world record with a time of 1.069 seconds, scooping four prizes and a cheque for £500, going on to complete in the national finals. The school also is entering in 2011 with Team Vitesse in the same class as Pulse.

At the January 2007 national finals in Birmingham, the Pulse car beat the world record twice more, setting the UK National record at 1.056 seconds. In a further test for the car they arranged to race the Honda car, which had beaten all the other cars at Indianapolis last year and since then had undergone improvements. Using non-competition canisters Pulse achieved a time of 1.020 seconds, one millisecond faster than the Honda car. Overall, Pulse won the fastest R-type car, the Innovative Thinking award, the best 14-16 presentation and the 14-16 age group. As a result of their achievements they went on to represent England at the International Finals in 2008, which were held in Malaysia during the Sepang Grand Prix.

The Pulse F1 Team succeeded in becoming World Champions in the International Finals in Malaysia in March 2008. The team beat off competition from around the world in a knockout style event winning the Bernie Ecclestone Trophy and also university sponsorship, as well as the privilege of being VIP guests at the 2008 Malaysian Grand Prix.

This is a copy of the original school song. Though the use of the song ceased during the 1990s, it is still remembered by generations of former students: 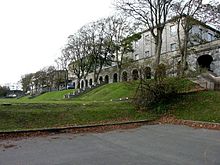 Looking west along the Arcade

The school's pupils are currently split equally between 6 houses, which compete each year for the St. Levan's Shield, the houses are Campbell, Edison, Newton, Priestley, Smeaton and Winstanley.

The school buildings are named after famous Plymouthians:

The school has a residential centre in the French town of Uzel in Brittany. This offers pupils the opportunity for work experience with local companies as well as the chance to improve their French and enjoy activities like horseriding and canoeing. The house was bought for the token amount of 1 Franc in 1991, from the Mayor of Uzel. Since its opening in 1992, annually over 250 boys visit the house. The Friday Choir has also brought pupils from two other Plymouth grammar schools, Plymouth High School for Girls and Devonport High School for Girls, to Uzel for an opportunity to sing to the locals. These, and many other Friday Choir tours, were organised by music teacher Trefor K Farrow. Mr Farrow joined DHSB in 1965 and completed his fortieth and final year in 2006. In 2010 there were concerns about the Houses' long term sustainability as a result of the recession. The situation over its future is still undecided.

The school organises annual trips ranging from Snowdonia, Wales to Uzel, France and beyond. The school offers a large range of educational trips abroad some regular and also usually a selection of other non-regular trips each year including:

Devonport High School for Boys has been rapidly expanding over the past few years. This expansion includes the refurbishment of the 6th Form centre as well as the complete refurbishment of the old Edgcumbe Hall to create the Edgcumbe Theatre and Studio, a theatre facility both for performance and sound and light engineering.

Under the new government scheme in which every school has to teach cookery, a new cookery and home economics building has been built.

From March 1st 2011 the school converted to academy status, a highly controversial and bitterly divisive change among staff and pupils alike at the school, with several believing that the change has happened far too quickly.

There was mild controversy in the school and the DHSOBA when the information that an Old Boy from the school had been detained in the now infamous "fake rock" case emerged. According to the BBC, Russia's intelligence agency, the FSB, accused British agents of storing and exchanging classified information using a fake rock on a Russian street. [1]