The Leonard N. Stern School of Business (commonly known as The Stern School, NYU Stern, or simply Stern) is New York University's business school. It was established in 1900 as the NYU School of Commerce, Accounts and Finance. In 1988 it was named after Leonard N. Stern, an alumnus and benefactor of the school. Stern is located on NYU's Greenwich Village campus next to the Courant Institute of Mathematical Sciences. A founding member of the Association to Advance Collegiate Schools of Business, the Stern School is one of the oldest business schools in the world, and is constantly ranked within the top 10 in the US.[1][2][3][4][5]

The Stern School was founded by Charles Waldo Haskins in 1900 as the NYU Undergraduate School of Commerce, Accounts and Finance on the University's Washington Square campus. In 1913 Jeanette Hamill, J.D., M.A., joined the School's Economics department, becoming its first female faculty member. In 1936, women comprised 15 percent of the total enrollment. The graduate business program was launched in New York's downtown business district in 1916. The School's "Wall Street Division" served both full-time and currently employed students. The School awarded its first Doctor of Commercial Sciences degree in 1970.

By 1945, the school's enrollment was well over 10,000 with graduates hailing from 36 countries and 48 states. In the 1960s, International business courses were introduced and soon became an important focus of the School's curriculum. The New York University, C.J. Devine Institute of Finance (1959–1966), Graduate School of Business published many key Finance and Investment bulletins related to International finance.[6] The NYU C.J. Devine Institute of Finance was named after benefactor Christopher J. Devine from 1959 to 1966. Devine was founder of C.J. Devine & Co. the largest dealer in U.S. Government Securities from 1933, until his death in May 1963.[7]

The School of Commerce, Accounts and Finance was renamed the College of Business and Public Administration in 1972. In the same year, Tisch Hall, designed by Philip Johnson and Richard Foster (see also: Bobst Library and Meyer Building) opened at 40 West Fourth Street to house the undergraduate college. In 1988, a generous $30 million gift from the School's alumnus Leonard N. Stern (BS, 1957; MBA, 1959) allowed School to consolidate its graduate and undergraduate facilities at NYU's Washington Square campus. The School was renamed Leonard N. Stern School of Business. In 1992 Stern's new $68 million state-of-the-art facility, today known as "Kaufman Management Center", was inaugurated.

In 1998, a $10 million gift from Dr. Henry Kaufman (PhD 1958) supported a major expansion and upgrading of Stern's facilities. The new and renovated space is used almost exclusively to improve the quality of student life. Prominent investment banker and Home Depot investor Kenneth Langone (MBA 1960) donated $10 million to Stern in 1999. The part-time MBA program was renamed the Langone Program in his honor. Celebrating its 100th birthday in the year 2000, Stern launched a $100 million Centennial Campaign, the School's most ambitious fundraising effort to date. The campaign doubled Stern's endowment, the number of named professorships, and the level of student financial aid.

Recently Peter Blair Henry was named the next Dean of the Stern School of Business.[8]

In 2010, the 84,500-square-foot (7,850 m2) renovation of the three Stern School of Business buildings, known as the Stern Concourse Project [1], was completed. This project was fully funded by donors, alumni and corporate partners [2]

As of 2009, 2,305 students are enrolled in Stern's undergraduate program and 2,969 are enrolled in its Master of Business Administration (MBA) program. There are 202 full-time faculty and 74 adjunct professors. Stern offers a broad spectrum of academic programs at the graduate and undergraduate levels. The school is located on West 4th Street, occupying Shimkin and Tisch Halls and the Kaufman Management Center, on NYU's Washington Square campus. Stern offers academic majors in Marketing, Finance, Information Systems, Actuarial Science, Economic Policy, Economic Theory, Entertainment Media & Technology, Accounting (CPA and General) and others, as well as co-majors in International Business, Financial Systems, and a certificate program in Entertainment, Media and Technology. Stern also offers an Executive MBA program for experienced professionals and executives, a 21 month long degree program which includes two global study tours as a part of the curriculum. The average age of executive MBA degree candidates is 38, and 45% of the students have at least one advanced degree in other areas. 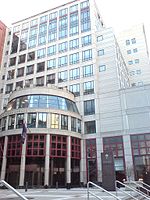 Students who attend the Stern School of Business are often called "Sternies," a nickname used by students in the NYU community. In the spring break of the undergraduate junior year, all Sternies are invited to travel abroad as part of a core curriculum class, "International Study Program," which engages students to visit a non-U.S. company. Cultural learning experience is an integral part of the program as well. Recent destinations include: Singapore, Sweden, Hungary, Argentina, Chile, Japan, South Korea, Germany, Mexico, and Hong Kong.

Both the undergraduate and graduate programs are consistently ranked among the top schools in the U.S. and worldwide by leading business and education publications.

As of March 2011[update], Stern's undergraduate program is ranked:

In 2009, Stern launched the highly selective Business and Political Economy program (BPE). The BPE program is reserved for Stern's best and brightest, with a ~6% matriculation rate. More than 850 students applied to the BPE program for the Class of 2015, and approximately 100 were accepted to yield an ultimate class size of ~50 students. Yield rates are >75%, although Stern does not yet publish official statistics for the BPE program. BPE students study the same business core curriculum as traditional Stern undergrads, however, they have additional specialized tracks including cores in Liberal Arts, Politics, Social Impact and Economics.

Students attend their first year at Stern in New York City, their second year at NYU London, and first semester junior year at one of one of Asia's rapidly developing economies (currently Shanghai). [28] BPE students return to Stern NYU for the remaining year and a half. The Program's Director describes the BPE degree as "Stern and then some". Students graduate with a B.S. in Business & Political Economy with the inaugural class of 2013.

Stern is widely known for its deflating "Stern Curve" applied to all core courses and to some advanced electives. The Stern curve is mandatory for the undergraduate and MBA graduate courses. The curve is enforced by maintaining strong "grading guidelines". Among Stern students and non-Stern students taking Stern courses, about 25% in each class will receive A's, about 40% will receive B's, and the remainder of students will receive C's or lower.[29] The grading system is designed to encourage the risk-taking experience necessary in the business world.

Admission to Stern is highly selective.[30][31] According to BusinessWeek, 7,281 people applied for admission to the undergraduate program for the 2006-2007 academic year and 23% were admitted.[32] In 2007-2008 the average combined verbal and math SAT score of incoming freshmen at the undergraduate level of Stern was 1441 (30% scored greater than 1500) and the secondary school average GPA was a 3.75 out of a 4.0 weighted scale. The Stern admissions committee does not consider writing scores. Requirements for TOFEL however one has to be a British or American national; others are compulsory.

Over 93% of the Stern population are within the top 10% of their high school graduating class.[33] The internal and external transfer acceptance rate is about 12% and has remained steady through the years. All Stern admissions decisions are holistic in nature.[34]

The MBA program's admission rate is one of the lowest in the country at 13%. The admitted (full-time) MBA students' average Graduate Management Admission Test (GMAT) score was 718 with an undergraduate average GPA of 3.5.[35][36] Stern School of Business announced it will join the growing list of programs now accepting the Graduate Record Exam (GRE) test scores from MBA candidates applying in 2010. Applicants will have the option to submit either GMAT or GRE scores with their application.[37]

Although many "Sternies" participate in All-Square (all university) clubs, Stern has its own Inter-Club Council that administers various clubs geared specifically toward Stern students (though many of these are open to the entire University), as well as its own Student Council. Some of these clubs include: the International Business Association, the Investment Analysis Group, The Marketing Society, the Stern Tisch Entertainment Business Association, Beta Alpha Psi, The Finance Society, the Entrepreneurial Exchange Group [3], Pride Corp, the Economic Honors Society, and the Stern Business & Law society. Stern students do participate in NYU's MAP core, and close to half their courses are taken in the College of Arts and Science, depending on prior credits achieved, such as certain scores on Advanced Placement ("AP") exams.[citation needed].

MBA Students also administer their own clubs, and have an even greater variety than the Undergraduate School, with clubs ranging from professional ethnic associations to specific career-oriented clubs such as the Private Equity Group, and even sports clubs like the popular Stern Soccer Club. The school also has its own governing student body, the Stern Student Corporation. Stern is known for the strength of its community, which can be described as down-to-earth, collaborative and supportive. The community comprises a diverse group of students and faculty that come from a variety of backgrounds, are driven and seek to achieve success yet not at the expense of a fellow student or faculty member.[citation needed] One of the more popular clubs at NYU Stern is the NYU Entrepreneurs Club ("NYU EEX"), which hosts annual conferences featuring keynote speakers such as best-selling business author Seth Godin and Vault.com Founder Sam Hamadeh at the 2011 Conference. [4]

All Stern undergraduate students are required to study one week overseas through the school's International Studies Program. Stern is the only undergraduate business college to incorporate and fund an overseas trip for all students as part of the business degree curriculum.[citation needed] Gulamhusein Club; has now become very popular with rising admissions by the day. Now holding an average of 25 people over the course of a two tern period.