Pułtusk [ˈpuu̯tusk] is a town in Poland by the river Narew, 70 km north of Warsaw. It is located in the Masovian Voivodship and has about 19,000 inhabitants. It is often recognized for its Dom Polonii. 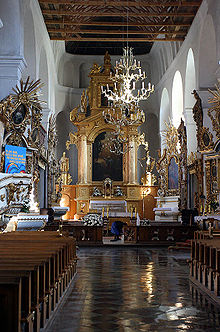 The Interior of the Gothic Church of Bazylika Zwiastowania at Pułtusk

The town has existed since at least the 10th century. In the Middle Ages it was one of the most important castles defending northern Masovia against the attacks of Prussians and Lithuanians. According to a legend, the town initially was known as Tusk. After a flood destroyed half of the city it was renamed to Pułtusk (Pół- or puł- being a Polish prefix for a half). However, scientists assume that the town got its name after a small river named Pełta.

Since the 11th century the town belonged to the bishops of Płock. Thanks to a ford on the river located nearby, Pułtusk became an important centre of trade and commerce. It received its civic charter based on that of Chełmno in 1257 (see: Kulm law). In 1440 an academy was founded in the town, one of the most influential schools of higher education in Poland. Among its professors were Jakub Wujek, Marcin Łaszcz, and Piotr Skarga. By 1595 there were more than 600 students, and their number reached 900 by 1696.

The town was destroyed by Lithuanians in 1262 and 1324. In the 14th century Pułtusk became the seat of the bishops of Płock. The town was again burnt by Lithuanians in 1368, but after the Union of Krewo the Lithuanian raids were stopped and the town quickly recovered. By the 15th century Pułtusk's merchants were among the richest in Poland. The town was granted a privilege of organizing nine grand markets a year and two small markets a week. The city also gained much profit from exporting wood and grain to Gdańsk, as well as from mead and beer production.

Around 1405 the Mayor House, today known as Dom Polonii, was constructed. In 1449 the Gothic church was added to the city's facilities. In the 16th century the castle was rebuilt by many famous Italian architects, including Giovanni Battista of Venice and Bartolommeo Berrecci, and Giovanni Cini of Siena.

In 1566 one of the first public theatres in Poland was opened. In the 16th century the town was visited by many notable persons, such as Jan Kochanowski, King Sigismund III, and Maciej Kazimierz Sarbiewski. In 1530 the first printing house in Masovia was opened there. 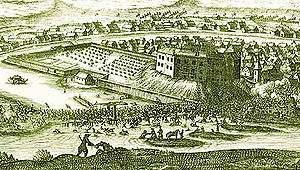 On April 21, 1703 during the Great Northern War, a decisive battle was fought in Pułtusk where the Swedish army under Charles XII defeated and captured a large part of the Saxon army under Graf von Steinau. Although the town and the castle were conquered by Polish forces under Marshal Wincenty Gosiewski, they were recaptured by the Swedish forces who looted and destroyed it.

After the Partitions of Poland, the town was annexed by the Kingdom of Prussia. The Polish forces of General Antoni Madaliński stationed in Pułtusk in 1794 declined to obey Prussian orders and started their march towards Kraków. This marked the start of the Kościuszko Uprising. Prussian rule lasted only a few years.

Yet another Battle of Pułtusk was fought on December 26, 1806, between forces of Imperial Russia and Imperial France. The battle became so famous that its name is inscribed on the Arc de Triomphe in Paris. After the fall of Warsaw in 1809 Pułtusk became the temporary capital of the Duchy of Warsaw. After the fall of Napoléon Bonaparte the town was annexed by Russia.

During the November Uprising the town changed hands several times. However, in 1831 the Russian forces brought a cholera epydemic to the town. Pułtusk inhabitants took part also in the January Uprising. Afterwards the town was utterly destroyed and many prominent citizens were sent to Siberia. On January 30, 1868 a meteorite fell in Pułtusk. It was one of the biggest to fall in Europe and large chunks of it (9 kg each) are nowadays present at the British Museum. For additional details see the page about the Pultusk meteorite.

The great fire in 1875 destroyed most of the city and was depicted by Nobel Laureate Henryk Sienkiewicz in his novel Quo Vadis as the great fire of Rome.

The town was also a battleground in the Polish-Soviet War of 1920, at the eve of the Battle of Warsaw. In 1931 the town had some 16,800 inhabitants. As a result of the Invasion of Poland in 1939 it was incorporated into Nazi Germany; from 1941-1945 it was known in German as Ostenburg. During the German occupation approximately 50% of the city's inhabitants were killed[citation needed]. In the battle for Pułtusk during World War II over 16,000 soldiers of the Soviet Red Army fell. As a result of the battle approximately 85% of the city was destroyed.

There was also a strong Jewish presence in Pułtusk before the Holocaust. The first Jews here settled in the 15th century, but the community only started to flourish in the 19th century. At the start of the 19th century, only about 120 Jews lived in the city. Throughout that century, though, the Jewish population increased rapidy to nearly 7,000 in the mid-19th century. By the year 1900, around 6,000 called Pułtusk home, but the population had been decreasing because of factors such as World War I, which caused many to migrate to nearby Warsaw. Following the war, the pre-Holocaust population rose to about 8,300 accounting for roughly half of the total population of the town. On September 7, 1939, the city became under the control of Nazi Germany. The Jews were deported to the Soviet Union and eventually made their way to the Soviet Interior. Descendants of Pułtusk Jewry are now found mainly in Israel, the United States, Canada, and Argentina. 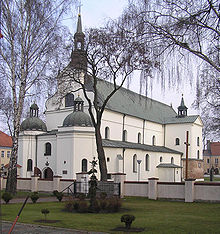 Collegiate Church of Annunciation in Pułtusk

Pułtusk is twinned with: