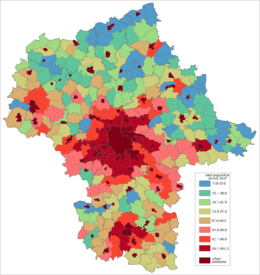 Masovian Voivodeship (Polish: województwo mazowieckie [vɔjɛˈvutstfɔ mazɔˈvjɛtskʲɛ]), is the largest and most populous of the sixteen Polish provinces, or voivodeships, created in 1999. It occupies 35,579 square kilometres (13,737 sq mi) of east-central Poland, and has 5.16 million inhabitants. Its principal cities are Warsaw (1.7 million) in the centre of the Warsaw metropolitan area, Radom (226,000) in the south, Płock (127,000) in the west, Siedlce (77,000) in the east, and Ostrołęka (55,000) in the north. The capital of the voivodeship is the national capital, Warsaw.

The province was created on January 1, 1999, out of the former Warsaw, Płock, Ciechanów, Ostrołęka, Siedlce and Radom Voivodeships, pursuant to the Polish local government reforms adopted in 1998. The province's name recalls the traditional name of the region, Mazowsze (sometimes rendered in English as "Masovia"), with which it is roughly coterminous. However, the southern part of the voivodeship, with Radom, historically belongs to Małopolska (Lesser Poland), while Łomża and its surroundings, even though historically part of Masovia, now is part of Podlaskie Voivodeship.

The voivodeship contains 85 cities and towns. These are listed below in descending order of population (according to official figures for 2006)[1]:

The counties, shown on the numbered map, are described in the table below.

Protected areas in Masovian Voivodeship include one National Park and nine Landscape Parks. These are listed below.

Masovian Voivodeship was one of the voivodeships of Congress Poland. It was formed from Warsaw Department, and transformed into Masovia Governorate.

There are three main road routes that pass through the voivodship: Cork-Berlin-Poznań-Warszawa-Minsk-Moscow-Omsk, Prague-Wrocław-Warsaw-Białystok-Helsinki and Pskov-Gdańsk-Warsaw-Kraków-Budapest.

Currently there are only small stretches of freeway in the area. However, upon completion the A2 freeway will be the first freeway to connect the region, and therefore the capital city, with the rest Europe. The freeway will pass directly through the voivodship from east to west connecting it with Belarus and Germany.

The railroad system is based on Koleje Mazowieckie and PKP Intercity.

The main international airport in the region is Warsaw Frederic Chopin Airport.

Due to it's central location and the fact that it contains the capital city of Warsaw, the Masovian Voivodeship is the wealthiest in Poland in terms of GDP per capita. In 2008 it stood at 22,200 Euro (PPP), which is 89% of EU27 average.