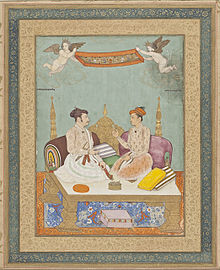 Maharaja Jai Singh of Amber and Maharaja Gaj Singh of Marwar-Folio from the Amber Album, circa 1630

Mirza Raja Jai Singh (July 15, 1611 – August 28, 1667) was a senior general ("Mirza Raja") of the Mughal Empire and a ruler of the kingdom of Amber (later called Jaipur). His father was Maha Singh the Raja of Garha, and his mother was Damayanti, a princess of Mewar.

The great Raja Man Singh of Amber had several sons, the most capable of whom were the eldest Jagat Singh and Bhau Singh. Jagat predeceased his father and left behind a son Maha Singh—by the Hindu custom of primogeniture, on Man Singh's death this grandson Maha Singh should have been the next Raja of Amber. However the Mughal Emperor Jehangir declared Maha's uncle Bhau Singh to be more experienced and capable and made him Raja in 1614 with the rank of a commander of 4000 (cavalry).

At the same time, to ensure that Maha Singh would not take to arms to enforce his hereditary claim, he was also made a commander of 1000 and was given the Central Indian district of Garha as his estate. Sometime later he too received the title of Raja…but while serving in the Deccan wars, Maha Singh died of hard drinking in 1617. His uncle Bhau Singh died childless, and of the same cause, in 1621.

At the age of 10 Jai Singh I became the Raja of Amber and the head of the Kachwaha Rajputs. His military career spans the full reign of Shah Jahan and the first half of Aurangzeb's reign. Jai Singh's first step in his rise to greatness took place on the accession of Shah Jahan (1627)—taking advantage of this change of sovereigns, Jai Singh's commander in the Deccan, Khan Jahan Lodi rebelled along with his Afghan followers. But the Rajput prince brought away his own army to the north and then joined in the campaign that finally defeated the rebels.

For these valuable services Jai Singh was made a commander of 4000. In 1636 Shah Jahan organized a grand campaign against the southern sultanates in which Jai Singh played a leading part—later this same army was sent to campaign against the Gond kingdoms. For his part in these successful ventures Jai Singh was promoted to the rank of commander of 5000 and the district of Chatsu (in Ajmer) was added to his kingdom. By defeating the Meo robber tribes in the north of Amber, Jai Singh further increased the size of his ancestral kingdom. in 1641 he subdued the rebellion of Raja Jagat Singh Pathania of the hill-state of Mau-Paithan (Himachal Pradesh).

In 1638 the fort of Kandahar was surrendered by its Persian commander, Ali Mardan Khan, to Shah Jahan. The emperor's son Shuja, accompanied by Jai Singh, was sent to take delivery of this important fort. To overawe the Persian Shah from interfering in this task, Shah Jahan assembled a 50,000 strong army in Kabul. On this occasion Jai Singh received the unique title of Mirza Raja from Shah Jahan, which had earlier been given to his great-grandfather Raja Man Singh I of Amber by Emperor Akbar.

In 1647 Mirza Raja Jai Singh joined in Shah Jahan's invasion of Balkh and Badakshan in Central Asia. The conquest was easily achieved by the Mughals but the occupation of these poor regions could not be sustained—not one Mughal officer would agree to be posted permanently in that desolate land and away from the wealth and luxury of India, which was ironic since many of them had originated from these parts! This insane project thus ended in financial failure.

In 1649 another blow knocked down Mughal prestige—Kandahar was recovered by Shah Abbas II. In the ensuing Mughal-Safavid War the Mughals twice attempted to eject the Persians from Kandahar under the command of Prince Aurangzeb (in 1649 and 1652) —on both occasions Raja Jai Singh was present as an army commander, but the attempts failed due to the lack of adequate artillery and poor marksmanship of the Mughal gunners.

A third grand attempt was made in 1653 under the command of Shah Jahan's oldest and favorite son Dara Shikoh, a deadly rival of Aurangzeb, and again Jai Singh was sent with this army. Prince Dara was knowledgeable in spiritual matters and was refreshingly secular in his outlook, but these noble qualities were marred by his military incompetence and his flattering and foolish advisers. Dara was particularly harsh on officers that had taken part in the earlier campaigns under Aurangzeb and repeatedly taunted Jai Singh for those failures. But when his own campaign ended with the same result, the Mughals finally gave up all attempts to recover Kandahar.

Dara continued his hostility towards Jai Singh on return to Agra—no promotions or awards were given to the veteran general for skillfully covering the army's retreat. Instead Jaswant Singh of the rival Rathor clan was made commander of 6000 and received the superlative title of Maharaja.

In 1657 Shah Jahan fell seriously ill, to the extent that he was incapacitated. Dara's three younger brothers made preparations to seize the throne. Shah Shuja in Bengal and Murad in Gujarat crowned themselves emperors, but the clever Aurangzeb merely declared his intention of rescuing his father for the sake of Islam (Dara being avowedly secular). In the face of these triple dangers, Dara Shikoh now remembered Jai Singh—the Rajput chief was made commander of 6000 and sent east along with Dara's son Sulaiman and the Afghan general Diler Khan.

They triumphed over Shuja at the Battle of Bahadurpur (14 February) and chased him back to Bengal (May). By that time Aurangzeb had won the Battle of Dharmat and the Battle of Samugarh and had captured Agra (8 June). Jai Singh and his men were stuck far in the east while their homes and families in the west were at the mercy of Aurangzeb's troops—so he and Diller Khan advised Sulaiman to flee while they submitted to the new emperor.

Despite his victories Aurangzeb did not have a secure footing on the Mughal throne, and though bigoted, he needed the support of the leading Muslim and Rajput generals. So he pardoned Maharaja Jaswant Singh who had fought him at Dharmat and promoted Jai Singh as a commander of 7000, the highest possible rank for any general. Dara was treacherously captured by a Pashtun chief in Baluchistan and was executed by Aurangzeb in 1659.

Campaigns in the Deccan

The Deccan Wars between the Mughal Empire and the southern sultanates had been complicated by the rise of the Maratha national hero Shivaji.In 1659 Shivaji killed Afzal Khan, a notable general of Bijapur. In 1663 he wounded and chased away moghul general, Shaista Khan who was Aurangzeb's maternal uncle.The next year he sacked the rich port city of Surat in Gujarat. Mirza Raja Jai Singh, who had begun his own military career in the Deccan, was appointed to lead a 44,000 strong army against Shivaji.

After ravaging the Maratha king Shivaji's region and capturing the fort of Purandar Treaty of Purandar was signed, Jai Singh convinced Shivaji to come to terms and join him in an invasion of Bijapur, which would be beneficial for both sides. For this triumph Jai Singh, already the highest ranking general, received rich gifts in gold and silver——both his sons, Ram Singh and Kirat Singh, were raised in rank. The latter was serving under his father while the former was acting as his agent at the Mughal court.

The Bijapuris melted away before this array and Jai Singh reached within 12 miles of Bijapur city. However the scorched earth tactics of the Deccanis succeeded, Jai Singh's food supply ran out and he was forced to begin his retreat in January 1666. At this time he sent Shivaji to the Mughal court to meet Aurangzeb while he conducted his army to safety. At Agra Shivaji was arrested but managed to escape (August 1666).

Unlike other generals who had failed in the Deccan, Jai Singh was punished harshly, partly because he was also held responsible for his son's actions at Agra, and partly because he was a Hindu. For the expenses of this campaign the Rajput general had received only 3 million rupees from Aurangzeb, and had spent 10 million rupees from the accumulated hoards in his ancestral kingdom. Not a pice of this money was compensated by his ungrateful master—probably the opportunity of ruining a leading Hindu chief was too tempting for Aurangzeb. Only two years after Jai Singh's demise Aurangzeb passed an order (1669) calling for the demolition of Hindu temples in the Mughal provinces.

In a letter written to one of his officials Jai Singh complained, "In four ways losses have fallen upon me—first my mujra (honour) is gone, second the districts of my kingdom have been taken away (by Aurangzeb), thirdly what I spent on this war is gone, and fourthly—and what is worst of all—my son's affairs have been ruined."

Raja Jai Singh died in the Deccan (28 August 1667) under mysterious circumstances and is universally believed that he had been poisoned on the orders of Aurangzeb. The fortunes of his family sank low in the next two generations, but were revived and raised to unexpected heights by Jai Singh II.