His Highness, The Imperial Prince (Shahzada) Dara Shikoh (Persian: دارا شكوه ) (full name and royal title Padshahzada-i-Buzurg Martaba, Jalal ul-Kadir, Sultan Muhammad Dara Shikoh, Shah-i-Buland Iqbal[1]) (March 20, 1615 – August 30, 1659) was the eldest son and the heir apparent of Mughal Emperor Shah Jahan and his wife Mumtaz Mahal. His name دارا شكوه in Persian means "Darius the Magnificent". He was favoured as a successor by his father and his sister Princess Jahanara Begum Sahib, but was defeated by his younger brother Prince Muhiuddin (later the Emperor Aurangzeb) in a bitter struggle for the imperial throne. The course of the history of the Indian subcontinent, had Dara prevailed over Aurangzeb, has been a matter of some conjecture among historians.[2][3][4]

The struggle for succession and death 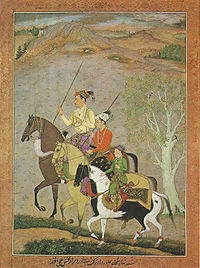 Humayun's Tomb, where the remains of Dara were interred in an unidentified grave. 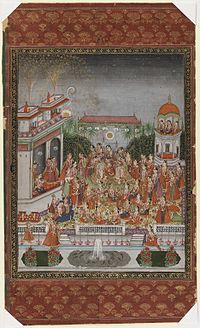 Celebration of the birth of Dara Shikoh.

On September 6, 1657, the illness of emperor Shah Jahan triggered a desperate struggle for power among the four Mughal princes, though realistically only Dara and Aurangzeb had a chance of emerging victorious.[5] Shah Shuja was the first to make his move, declaring himself Mughal Emperor in Bengal and marched towards Agra from the east. Murad Baksh allied himself with Aurangzeb.

Despite strong support from Shah Jahan, who had recovered enough from his illness to remain a strong factor in the struggle for supremacy, and the victory of his army led by his eldest son Sulaiman Shikoh over Shah Shuja in the battle of Bahadurpur on February 14, 1658, Dara was defeated by Aurangzeb and Murad during the Battle of Samugarh, 13 km from Agra on May 30, 1658. Subsequently Aurangzeb took over Agra fort and deposed emperor Shah Jahan on June 8, 1658.

After the defeat, Dara retreated from Agra to Delhi and thence to Lahore. His next destination was Multan and then to Thatta (Sindh). From Sindh, he crossed the Rann of Kachchh and reached Kathiawar, where he met Shah Nawaz Khan, the governor of the province of Gujarat who opened the treasury to Dara and helped him to recruit a new army.[6] He occupied Surat and advanced towards Ajmer. Foiled in his hopes of persuading the fickle but powerful Rajput feudatory, Maharaja Jaswant Singh of Marwar, to support his cause, the luckless Dara decided to make a stand and fight Aurangzeb's relentless pursuers but was once again comprehensively routed in the battle of Deorai (near Ajmer) on March 11, 1659. After this defeat he fled to Sindh and sought refuge under Malik Jiwan, an Afghan chieftain, whose life had on more than one occasion been saved by the Mughal prince from the wrath of Shah Jahan.[7] However, Malik betrayed Dara and turned him (and his second son Sipihr Shikoh) over to Aurangzeb's army on June 10, 1659.

Dara was brought to Delhi, placed on a filthy elephant and paraded through the streets of the capital in chains.[8] Dara's fate was decided by the political threat he posed as a prince popular with the common people - a convocation of nobles and clergy, called by Aurangzeb in response to the perceived danger of insurrection in Delhi, declared him a threat to the public peace and an apostate from Islam.[9] He was assassinated by four of Aurangzeb's henchmen in front of his terrified son on the night of August 30, 1659. 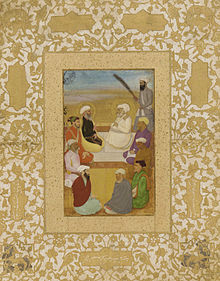 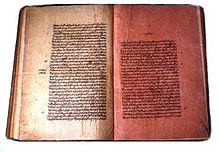 A page from Majma-ul-Bahrain (a book on comparative religion by Muhammad Dara Sikoh) in the manuscripts collection at the Portrait Gallery of Victoria memorial, Calcutta.

Dara Shikoh is widely renowned[10] as an enlightened paragon of the harmonious coexistence of heterodox traditions on the Indian subcontinent. He was an erudite champion of mystical religious speculation and a poetic diviner of syncretic cultural interaction among people of all faiths. This made him a heretic in the eyes of his orthodox brother and a suspect eccentric in the view of many of the worldly power brokers swarming around the Mughal throne. Dara was a follower of Lahore's famous Qadiri Sufi saint Hazrat Mian Mir,[11] whom he was introduced to by Mullah Shah Badakhshi (Mian Mir's spiritual disciple and successor) and who was so widely respected among all communities that he was invited to lay the foundation stone of the Golden Temple in Amritsar by the Sikhs. Dara subsequently developed a friendship with the seventh Sikh Guru, Guru Har Rai. Dara devoted much effort towards finding a common mystical language between Islam and Hinduism. Towards this goal he completed the translation of 50 Upanishads from its original Sanskrit into Persian in 1657 so it could be read by Muslim scholars.[12] His translation is often called Sirr-e-Akbar (The Greatest Mystery), where he states boldly, in the Introduction, his speculative hypothesis that the work referred to in the Qur'an as the "Kitab al-maknun" or the hidden book, is none other than the Upanishads.[13] His most famous work, Majma-ul-Bahrain ("The Confluence of the Two Seas"), was also devoted to a revelation of the mystical and pluralistic affinities between Sufic and Vedantic speculation.

The library established by Dara Shikoh still exists on the grounds of Indraprastha University, Kashmiri Gate, Delhi, and is now run as a museum by Archeological Survey of India after being renovated.[14][15] 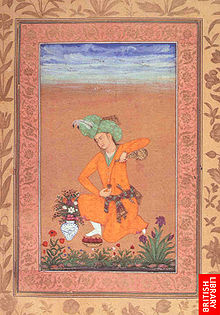 He was also a patron of fine arts, music and dancing, a trait frowned upon by his sibling Aurangzeb. In fact, many of his paintings are quite detailed and compare well to a professional artist of his time.[citation needed] The 'Dara Shikoh album' is a collection of paintings and calligraphy assembled from the 1630s until his death. It was presented to his wife Nadira Banu in 1641-42 [16] and remained with her until her death after which the album was taken into the royal library and the inscriptions connecting it with Dara Shikoh were deliberately erased; however not everything was vandalised and many calligraphy scripts and paintings still bear his mark.

Dara Shikoh is also credited with the commissioning of several exquisite, still extant, examples of Mughal architecture - among them the tomb of his wife Nadira Banu in Lahore,[17] the tomb of Hazrat Mian Mir also in Lahore,[18] the Dara Shikoh Library in Delhi,[19] the Akhun Mullah Shah Mosque in Srinagar in Kashmir[20] and the Pari Mahal garden palace (also in Srinagar in Kashmir).[21] 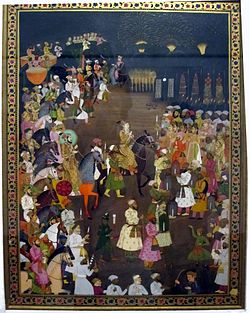 The Mughal Emperor Shah Jahan in the marriage procession of his eldest son Dara Shikoh. Mughal-Era fireworks and bamboo rockets were utilized to brighten the night.

Dara Shikoh is also the name of the protagonist of Mohsin Hamid's 2000 novel Moth Smoke, which reimagines the story of his trial unfolding in contemporary Pakistan. The novel concludes with these words: "It is perhaps between hope and memory, in the atomized, atomic lands once Aurangzeb's empire, that our poets tell us Darashikoh, the apostate, called out to God as he died."[25]

The character of Dara Shikoh is a quintessential Muslim liberal struggling against orthodoxy.[citation needed] In recent years Dara Shikoh has been a subject of many books, novels and plays. Shyamal Gangopadhyaya, Danish Iqbal and Gopal Gandhi are few contemporary writers who wrote about this forgotten liberal hero.

Danish Iqbal’s Dara Shikoh is a modern classic which was staged by director M S Sathyu of the film Garam Hawa fame in Delhi in 2003–04. In the words of critic Ramesh Chand Charlie, the stage play Dara Shikoh is a turning point of traditional theatrical sensibilities.[citation needed] Use of Wali Deccani's period poetry provides this Play with a very rare artistic and historical context. Use of Kathak choreography by Rani Khanum and her troupe, and authentic costumes including headgear, swords and period art work was a treat for the eyes.[citation needed] Use of Sufi music, context and ambience is very alluring and mesmerising. This play had a good run in cities like Delhi, Gurgaon and Banglore.

There are reports that this play is also being converted into a feature film under the direction of Sathyu.[citation needed]

Mittal, Aditya The Battle of Samugarh
Gyani Brahma Singh, Dara Shikoh - The Prince who turned Sufi in The Sikh Review
The Hindu, A forgotten symbol of composite culture

Sleeman, William (1844), E-text of Rambles and Recollections of an Indian Official