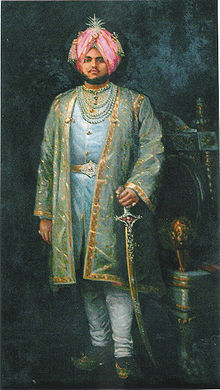 Mahārāja (also spelled maharajah) is a Sanskrit title for a "great king" or "high king".[1] The female equivalent title Maharani (or Maharanee, Mahārājñī ) denotes either the wife of a Maharaja or, in states where that was customary, a woman ruling in her own right. The widow of a Maharaja is known as a Rajamata.[2] The term Maharaj denotes separate noble and religious offices, although the fact that in Hindi the suffix 'a' in Maharaja is silent makes the two titles near homophones.

The word Maharaja originates in the Sanskrit language and is a compound karmadharaya term (from mahānt "great" and rājan "king"). It has the Latin cognates (accusative case) magnum ("great") and rēgem ("king").[3][4] Due to Sanskrit's major influence on the vocabulary of most languages in India and Asia, the term 'maharaja' is common to many modern Indian languages, such as Hindi, Tamil, Telugu, Oriya, Punjabi, Bengali, Gujrati, etc. The Sanskrit title maharaja was originally used only for kings who ruled a considerably large region with minor tributary kings under them. But from the medieval times the title was used even by rulers of smaller states since they claimed to be the descendants of the ancient maharajas.

The word Maharaja, as well as a variant of the word, Maraj, is a common surname in the Indian subcontinent.[5]

Maharaja as a ruler's title

On the eve of independence in 1947, India (including present day Pakistan & Bangladesh) contained more than 600 princely states, each with its own ruler, often styled Raja or Thakur (if the ruler were Hindu) or Nawab (if he were Muslim), with a host of less current titles as well.

The British directly ruled two thirds of India; the rest was under indirect rule by the above-mentioned princes under the considerable influence of British representatives, such as Residents, at their courts.

The word Maharaja may be understood simply to mean "king" (as in Jammu and Kashmir), in spite of its literal translation as "great king". This was because only a handful of the states were truly powerful and wealthy enough for their rulers to be considered 'great' monarchs; the remaining were minor princely states, sometimes little more than towns or groups of villages. The word, however, can also mean emperor in contemporary Indian usage.

The title of Maharaja was not as common before the gradual British colonization of India, upon and after which many Rajas and otherwise styled Hindu rulers were elevated to Maharajas, regardless of the fact that scores of these new Maharajas ruled small states, sometimes for some reason unrelated to the eminence of the state, for example support in World War I or World War II. Two Rajas who became Maharajas in the twentieth century were the Maharaja of Cochin and the legendary Maharaja Jagatjit Singh of Kapurthala.

The gun salutes (crucial in protocolary respect) enjoyed by the princely states that acceded to the Dominion of India on 14 August 1947, included more Maharajas than any other title, and in most of the classes, though predominantly in the higher ones:

In the Mughal Empire it was quite common to award to various princes (hereditary or not) a series of lofty titles as a matter of protocolary rank. Many of these (see also above) elaborate explicitly on the title Maharaja, in the following descending order: 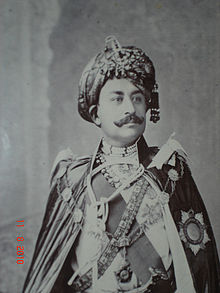 Furthermore there were various compound titles simply including other princely styles, such as :

Certain Hindu dynasties even came to use a unique style, including a term which as such is not of princely rank, e.g. Maharaja Gaikwar of Baroda, Maharaja Scindia of Gwalior, Maharaja Holkar of Indore, three of the very highest ranking ruling houses.

Nobiliary and honorary use

Like Raja and various other titles, Maharaja was repeatedly awarded to notables without a princely state, such as zamindars.

Derived style for princes of the blood

As many Indonesian states started out when the archipelago was still predominantly Hindu (Bali still is) or Buddhist, some have been ruled by a maharaja, such as Srivijaya, Majapahit and Kutai Karta Negara (until that kingdom converted to Islam in 1565, when the Muslim title of sultan was adopted). Traditional titles remain in use for the other members of this dynasty, such as Pangeran Ratu for the heir.

In northern Borneo, the title Maharajah of Sabah and Rajah of Gaya and Sandakan was used from 29 December 1877 to 26 August 1881 by Alfred Dent (compare White Rajah).

In Seri Malayas of the Srivijaya, under the Srivijaya satellite empire of the Majapahit Empire dominated over the whole Malayas far reaching the present Philippine Archipelago, Malaysia, Brunei, Indonesia under the Srivijaya Empire of the Majapahit King Maharaja Pamarwasa. The latter's daughter Es-kander was married to an Arab (Zein Ul-abidin) who was a Srivijaya ruler in Seri who were a Srivijaya Monarchy. In the 12th century with the fall of the empire, the Seri King being a Muslim established the Sultanate of Brunei in 1363 with the reigning title as Sultan Mohamad Shah. In 1426-1450, he also established the Sultanate of Sulu while his brother Makdum Karim (Kabungsuwan Aliwya), a Srivijaya Johore ruler established the Sultanate of Maguindanao-Ranao or Mindanao. His progeny in 1704, Sayyid Nakhoda Perkasa Angging (Maharaja Anddin) was given, by the Brunei Sultan, the title Maharaja of Brunei in the Sulu Sultanate. Thus, his successor Prince and Sultan to append the title Maharaja Adinda to the beginning of the name; Maharaja Adinda Taup the 1859 Maharaja of Jolo-Sulu and Prince Heir-apparent of Sultan Moh. Fad'l (Sultan Pulalun) at the time.

In the Philippines, more specifically in Sulu, maharaja (also spelled "Maharajah") was a title given to various sub-divisional princes after the fall of the Srivijaya of the Majapahit Empire. Parts of the Philippines may have later been ruled by community leaders as maharajah from once being under the Srivijaya and Majapahit empires.

In the establishment of the Sultanate of Sulu from approximately 1425 to 1450, the title of maharaja was even used by a Sulu sultan, such as the 1520-1548 Sulu Sultan Maharaja Upo (Sultan Shar ul-uddin Digmin, also known as Mu'izz Ul-mutawad'in), the grandson of Zein Ul-abidin or Mohamad Shah-the Brunei's Sultanate founder, a former Srivijayan ruler married to the daughter of the Maharaja of the Majapahit Empire. As the 1704 Brunei Maharaja in the Sulu-Maharaja Anddin (Sayyid Nakhoda Perkasa Angging) and as the 1859 Maharaja of Jolo, Sulu-Maharaja Adinda Taup, the Prince Heir-apparent of Sultan Moh.Fad'l or Sultan Pulalun.

In the Sulu Sultanate in the Philippines, the Raja Muda (Crown Prince) is the heir to the throne, the Maharaja Adinda is the second heir apparent and the Maharaja Lailah acts as chief of the palace. [6] Eventually, Maharajah Adinda was also used to refer to a particular lineage within the royal families.

Maharaja was also part of the titles of the nobility in the Sumatran sultanate of Aceh. In the past the title of Maharaja is given to leader of the unreigning noble family and the Prime Minister Maharaja Mangkubumi. The last Prime Minister of Aceh who was installed to be the Maharaja Mangkubumi, Habib Abdurrahman el Zahir, also acted as the foreign affairs minister of Aceh but was deposed and exiled to Jeddah by the colonial Dutch East Indies authorities in October 1878.