Immigration to South Korea Most immigrants are not eligible for citizenship or even permanent residency, unless they are married to a South Korean citizen or have invested more than $5 million USD in the local economy. An exception is made for those whose non-financial contribution to the nation has been specifically recognized by the Justice Minister, and for holders of a business visa who have invested more than US$500,000.[1] Immigrants count for only around 1% of the population but are a growing force as international marriages increase due to lack of marriageable Korean women in the countryside.

Immigration policy is overseen by the Ministry of Justice through the Korea Immigration Service. Related ministries include: Ministry of Labor, Ministry of Health and Welfare, and Ministry of Foreign Affairs and Trade. The Nationality act, Immigration Control Act, Multicultural Families Support Act, and Framework Act on Treatment of Foreigners are the foundation of immigration policy in Korea. Korean government initiated a discussion whether to establish independent Immigration Office to accommodate fast growing immigration and to prepare inclusive and rational immigration policies, from 2003, without many progresses. Currently, Foreigner Policy Committee which is headed by the Prime Minister is coordinating foreigner related policies which were handled by many ministries. However, its role is limited because of the short of resources and manpower. Establishment of an Immigration Office is expected to solve these problems by concentrating all the related resources and manpower under one umbrella.[2] According to the UN Recommendations on Statistics of International Migration (revised in 1998), long-term international immigration is recorded after an individual enters a country and establishes his usual place of residence there for one year or more. So, When Korea government build new policies, immigrant laborers and children of illegal migrants should be counted to follow this guideline. The Republic of Korea is a signatory to the 1951 Refugee Convention relating to the Status of Refugees. The Korean Government is thus the competent authority to determine refugee status in Korea.

Korea used to be a migrant source country, sending farmers, miners, nurses, and workers to the U.S., Germany, and the Middle East. The Korean diaspora population around the world numbers 6.82 million as of 2009, including 2.34 million in China and 2.1 million in the United States. This represented a slight decline of 0.22 million since 2007.[3] 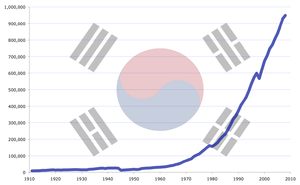 Korea experienced government initiated rapid economic growth from the 1970s which has been called ‘the Miracle on the Han River’. Until the end of 1980s, Korea was able to sustain its development without foreign laborers because it had enough cheap laborers. However, from the 1990s, Korea's decreasing birth rate and growing cost of labor caused labor shortages especially in the 3D jobs (Dirty, Dangerous and Difficult).

With economic development and urbanization, many people left rural areas. Young people headed for the city in search of better jobs and living conditions. As a tradition in the agrarian and Confucian society, the eldest son stayed behind in the countryside with their parents. Koreans began to see a chronic shortage of marriageable women in rural area, and thus international marriage started in rural areas to fill the demand. Most international marriage cases are handled by dating service companies that earn a commission.

Many migrant workers live in Korea, particularly in the industrial suburbs of Gyeonggi province such as Siheung city. The largest number come from China. Of a total of 55,154 D-3 visa holders in 2005, 17,787 were from China,[4] but others come from throughout South and Southeast Asia.

"International marriage" (국제결혼) has grown rapidly in South Korea since the late 1990s, and is especially common in rural farming communities. Most brides come from China, followed by Vietnam.[5] In addition, a smaller number of South Korean women marry foreign husbands; with husbands from China also leading in this category, followed by Japan.[6] In 2005, there were 31,180 marriages between South Korean men and non-Korean women; there were 11,941 marriages between South Korean women and non-Korean men. Together, these account for more than 10% of the total number of marriages in 2005: 316,375.[7] In Yeongju, a local Korean man has been featured on Korean television as "antenna man" for providing satellite TV access to immigrant women who married and moved to the rural countryside.[8]

A Kosian or Onnurian is a person of mixed Korean father and other Asian mother, or a family which mixes Korean and other Asian cultures.[9] The term, Kosian was first coined in 1997 by intercultural families to refer to themselves,.[10][11] The term is most commonly applied to children of a South Korean father and a Southeast Asian mother; its use spread in the early 2000s as international marriages became more common in rural areas.[11]

The term "Kosian" is considered offensive by some who prefer to identify themselves or their children as Korean,[12][13] Mixed-race Koreans have asked the media to refrain from using 'Kosian'.[14] Moreover, the Korean office of Amnesty International has claimed that the word "Kosian" represents racial discrimination.[15]

Although such children currently make up only 0.5% of children born in South Korea, some projections suggest that this will grow to 30% by 2020. This trend is partly due to the low birthrate in South Korea, and partly to rising rates of international marriage.

After the 1988 Seoul Olympics, South Korea opened its borders to general public and resulted in increased exchanges with foreign countries. The UN declared Korea as an official receiving country in 2007. The number of foreigners in South Korea grew from 0.39 million (1997) to 1 million (2007) in 10 years. Among these are 0.63 million temporary laborers, as well as 0.10 million foreigners married to South Korean nationals. Furthermore, there are 0.23 million illegal immigrants. The main sending countries are mostly Asian countries such as China, Vietnam, Mongolia, the Philippines, Pakistan and Bangladesh; however, other migrants also come from Nigeria, Ghana, Russia, and the U.S. for various purposes. [18]

From June 14, 1998 those who have at least one Korean parent are automatically granted Korean nationality from birth, regardless of their decisions on whether to choose the nationality of the foreign parent or the country of birth (if born outside Korea). Requirements for General Naturalization are as follows:

The South Korean Government says it wants to create a multicultural society and foreigner-friendly living environment.[19]

As described in the new national plan for Immigration Policy, Korea government claims World class Korea where foreigners live in harmony with Koreans. However, some critics denounce that Korean government’s goals, strategies, policies are all fundamentally discriminative.[20]

Since 1991 Korea has experienced a large influx of foreign workers. The Korean government has utilized trainee programs since 1992. About 10,000 Asian workers came to Korea under this program in 1992, and there were about 57,000 trainees in Korea in June 1996. However, the trainee program produced problems: the trainees tended to become undocumented workers due to wage differentials, and the trainees were not protected by the Labor Standard Law because they were not classified as laborers. The Employment Permit Program for foreigners, the government’s new foreign labor policy since 2004 is understood as a product achieved by a decade of interaction between Korean citizens and foreign migrant workers. However, these issues have more details to be resolved. On the legal dimension, the Korean state still allows foreigners to enter mainly for low-wage jobs and excludes them from social benefits. The social dimension of hierarchical nationhood is shown by public opinion data of Korean citizens towards foreign workers which represent deep rooted discrimination.

The treatment of foreign brides in Korea and their multicultural children is clearly growing into a major political issue now. Sending countries are likely to worry about their immigrants, because of deep rooted discrimination against foreigners in Korea. Now, most immigration into Korea comes from Southeast Asia, and immigrant treatment, particularly if there is abuse of foreign brides, is likely to provoke not only domestic problems, but also diplomatic tension. Koreans are deeply insecure about immigration. What immigration there has been, is frequently so focused on the birth-rate problem that it is more properly called bride-importing than immigration.[21]