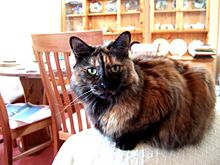 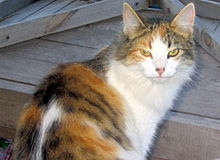 Tortoiseshell describes a coat coloring found mostly in female cats. Cats of this color are mottled, with patches of orange or cream and chocolate, black or blue. They are sometimes called torties. A cat with this coloring, but also with the tabby pattern, is a torbie.

"Tortoiseshell" is typically reserved for cats with brindled coats with relatively few or no white markings.

Those that are largely white with red and brown patches (rather than a brindled aspect) are described as tortoiseshell-and-white (in the United Kingdom) or calico (in Canada and the United States). Tortoiseshells and calicos are not specific breeds of cat. The tortoiseshell markings appear in many different breeds as well as in non-purebred domestic cats.[1] This pattern is especially preferred in the Japanese Bobtail breed.[2]

Tortoiseshell cats have coats with patches of red, brown or black, chocolate, cream, or cinnamon. The size of the patches can vary from a fine speckled pattern to large areas of color. Typically, the more white a cat has, the more solid the patches of color. Dilution genes may modify the coloring, lightening the fur to a mix of cream and blue, lilac or fawn. The markings on tortoiseshell cats are usually asymmetrical. Occasionally tabby patterns of eumelanistic and pheomelanistic colors are also seen (these are often then called "tortie-tabby", "torbie" or "caliby"). Tortoiseshell also can be expressed in the point pattern.

Tortoiseshell and calico coats result from an interaction between genetic and developmental factors. The primary gene for coat color (B) for the colors brown, chocolate, cinnamon, etc., can be masked by the co-dominant gene for the orange color (O) which is located on the X Chromosome and has two alleles, The Orange (XO) and not-Orange(Xo), that produce orange phaeomelanin and black eumelanin pigments, respectively. (NOTE: Typically, the X for the chromosome is assumed from context and the alleles are referred to by just the uppercase O for the orange, or lower case o for the not-orange.) The Tortoiseshell and Calico cats are indicated: Oo to indicate they are heterozygous on the O gene. The (B) and (O) genes can be further modified by a recessive dilute gene (dd) which softens the colors. Orange becomes Cream, Black becomes Gray, etc. Various terms are used for specific colors, for example, Gray is also called Blue, Orange is also called Ginger. Therefore a Tortoiseshell cat may be a Chocolate Tortoiseshell or a Blue/Cream Tortoiseshell or the like, based on the alleles for the (B) and (D) genes.

The cells of female cats, which like other mammalian females have two X Chromosome (XX), undergo the phenomenon of X-inactivation,[3][4] in which one or the other of the X-chromosomes is turned off at random in each cell in very early development. The inactivated X becomes a Barr body. Cells in which the chromosome carrying the Orange (O) allele is inactivated express the alternative non-Orange (o) allele, determined by the (B) gene. Cells in which the non-Orange (o) allele is inactivated express the Orange (O) allele. Pigment genes are expressed in melanocytes that migrate to the skin surface later in development. In bi-colored tortoiseshell cats, the melanocytes arrive relatively early, and the two cell types become intermingled, producing the characteristic brindled appearance consisting of an intimate mixture of orange and black cells, with occasional small diffuse spots of orange and black.

In tri-colored calico cats, a separate gene interacts developmentally with the coat color gene. This spotting gene produces white, unpigmented patches by delaying the migration of the melanocytes to the skin surface. There are a number of alleles of this gene that produce greater or lesser delays. The amount of white is artificially divided into mitted, bicolor, harlequin, and van, going from almost no white to almost completely white. In the extreme case, no melanocytes make it to the skin and the cat is entirely white (but not an albino). In intermediate cases, melanocyte migration is slowed, so that the pigment cells arrive late in development and have less time to intermingle. Observation of tri-color cats will show that, with a little white color, the orange and black patches become more defined, and with still more white, the patches become completely distinct. Each patch represents a clone of cells derived from one original cell in the early embryo.

Male cats, like other mammalian males, have only a single X chromosome (XY) that does not undergo X-inactivation: coat color is determined by which allele is present on the X, and they will be either entirely black or orange. Very rarely (approximately 1 in 3,000[5]) a male tortoiseshell or calico is born. These animals typically have an extra X chromosome (XXY), a condition known in humans as Klinefelter syndrome, and undergo an inactivation process like that in females. As in humans, these cats are sometimes sterile because of the imbalance in sex chromosomes. Some male calico or tortoiseshell cats may be chimeras, which result from the fusion in early development of two embryos with different color genotypes. Others are mosaics, in which the XXY condition arises after conception and the cat is a mixture of cells with different numbers of X chromosomes. Simply said they are melanistic calicos meaning saturation of color.

Cats of this coloration are believed to bring good luck in the folklore of many cultures.[6] In the United States, these are sometimes referred to as money cats.[7] The Japanese Maneki Neko figurine is almost always a calico cat.