The cat flea, Ctenocephalides felis, is one of the most abundant and widespread species of flea on Earth.

The cat flea's primary host is the domestic cat, but this is also the primary flea infesting dogs in most of the world. The cat flea can also maintain its life cycle on other carnivores and on the Virginia opossum. Humans can be bitten but cannot be infested, so a population of cat fleas cannot be sustained by this aberrant host.[2] 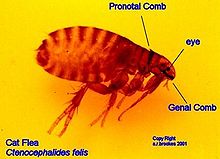 Photo showing some characteristics used to identify from other fleas, including genal comb

The female cat flea lays her eggs on the host, but the eggs, once dry, have evolved to filter out of the haircoat of the host into the resting and sheltering area of the host. 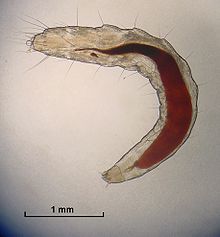 The eggs hatch into larvae, which are negatively phototaxic, meaning that they hide from light in the substrate. Flea larvae feed on a variety of organic substances, but most importantly subsist on dried blood that is filtered out of the haircoat of the host after it is deposited there as adult flea fecal material. Thus the adult population on the host feeds the larval population in the host's environment. 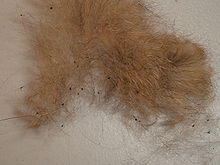 Flea larvae metamorphose through 4 stages before spinning a cocoon and entering the pupal stage. The pupal stage varies greatly in length; the pre-emergent flea does not normally emerge as a young adult flea until the presence of a potential host is perceived by warmth or vibration. Newly emerged fleas are stimulated to jump to a new host within seconds of emerging from the cocoon. The new flea begins feeding on host blood within minutes.[3][4][5]

Effects on the hosts 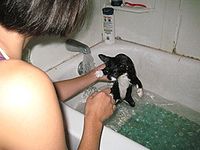 A kitten receiving a flea bath to treat a flea infestation.

A few fleas on adult dogs or cats cause little harm unless the host becomes allergic to substances in saliva. The disease that results is called flea allergy dermatitis. Small animals with large infestations can lose enough bodily fluid to fleas feeding that dehydration may result. Fleas are also responsible for disease transmission through humans. If the fleas have been sucking blood, then they will have a reddish-brown colour when squashed.[citation needed]

Cat fleas can transmit other parasites and infections to dogs and cats and also to humans. The most prominent of these are Bartonella, murine typhus, and apedermatitis. The tapeworm Dipylidium caninum can be transmitted when a flea is swallowed by pets or humans. In addition, cat fleas have been found to carry Borrelia burgdorferi, the etiologic agent of Lyme disease, but their ability to transmit the disease is unclear.[6]