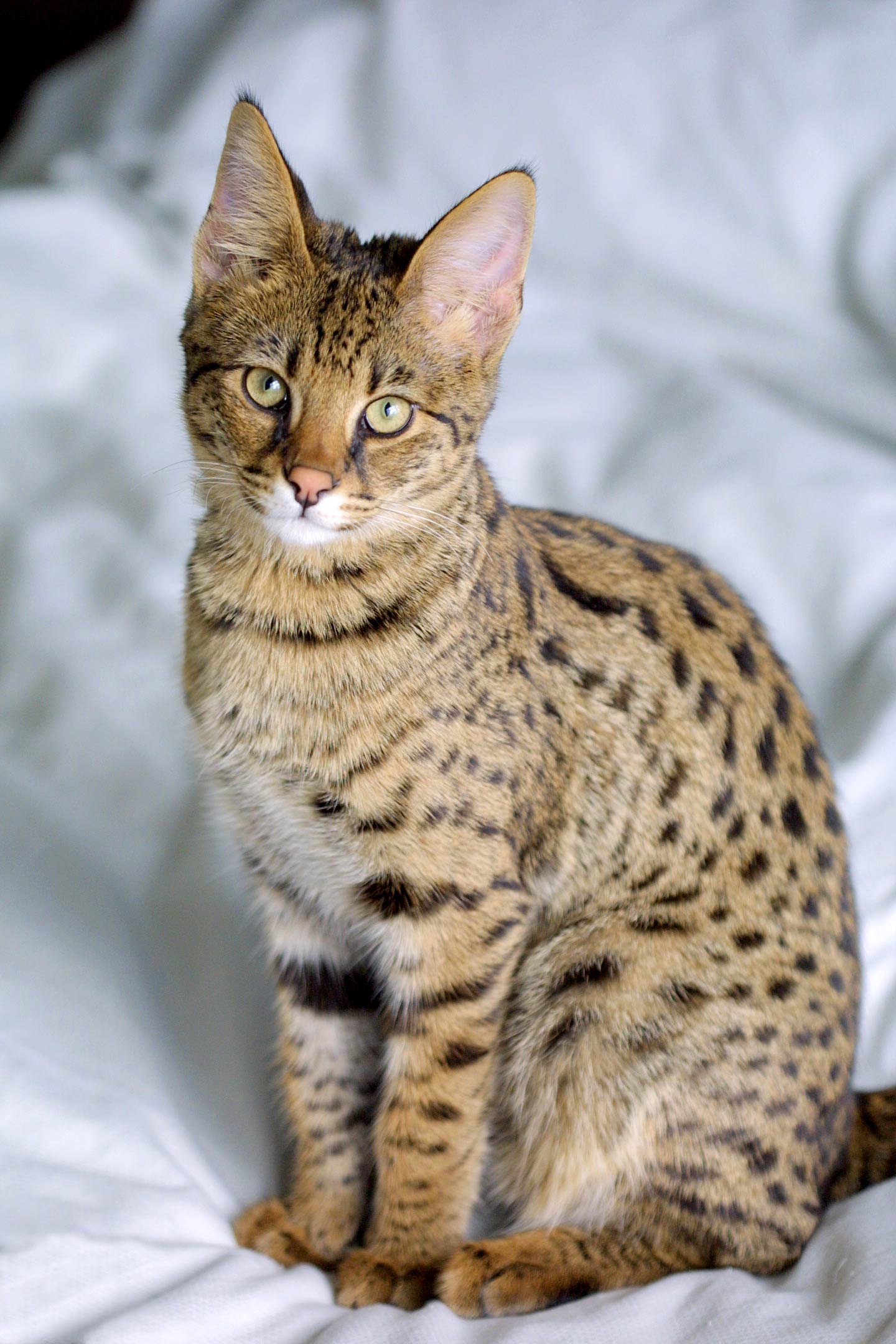 The Savannah is a hybrid domestic . It is a cross between the and a domestic cat.

Bengal breeder Judee Frank has managed to crossbreed a and , producing the first Savannah (named Savannah) on , .

In 1996, Patrick Kelley and wrote the original version of the Savannah breed standard, and presented it to the TICA board. However, in that same year, TICA had placed a moratorium on new breeds. It was not until 2000 that the standard, with input from other breeders, was accepted by TICA in a narrow 7-to-6 vote. At that same time, the Savannah International Member & Breeder Association (SIMBA) was formed, and reported just over 100 registered savannahs. As of 2001, the population of Savannahs was estimated to be over 200. [cite web|title = CAES & CIA Magazine| accessdate = 2006-08-26|url = http://www.s-i-m-b-a.org/braz.htm]

and F2 hybrids are usually the largest, due to the stronger genetic influence of the African Serval ancestor. Male Savannahs tend to be larger than females. Early generation Savannahs may weigh 10 to 25 lbs. Size is also very dependent on generation and sex, with F1 male cats usually being the largest. Later generation Savannahs are usually between 8-17 lbs. Because of the random factors in Savannah hybrid genetics, there can be significant variation in size, even in one litter. Some breeders report Savannahs in excess of 30 pounds, with at least one breeder claiming an over 40 pound male.Fact|date=September 2007

The coat of a Savannah depends a lot on the breed of cat used for the domestic cross. Early generations have some form of dark spotting on a lighter coat, and many breeders employ "wild" looking spotted breeds such as the Bengal and for the cross to help preserve these markings in later generations. The International Cat Association (TICA) breed standard calls for brown spotted tabby (cool to warm brown, tan or gold with black or dark brown spots), silver spotted tabby (silver coat with black or dark grey spots), black (black with black spots), and black smoke (black tipped silver with black spots) only. [cite web|title = TICA Breed Standard for Savannahs (SV)| accessdate = 2006-11-24|url = http://www.ticaeo.com/Content/Publications/Pages/SV.pdf] In addition, the Savannah can come in nonstandard variations such as the classic or marble patterns, snow coloration (), and blue or other diluted colors derived from domestic sources of .

The overall look of an individual Savannah depends greatly on generation, with higher-percentage Savannah cats often having a more "wild" look. The domestic breed that is used will influence appearance as well. The domestic out-crosses for the Savannah breed that are permissible in The International Cat Association (TICA) are the , the , the , and the Domestic Shorthair. In addition, some Savannah breeders use "non-permissible" breeds or mixes such as Bengal (for size and vivid spotting) and Maine Coon cats (for size) for the domestic parentage. A Savannah's wild look is often due to the presence of many distinguishing Serval characteristics. Most prominent of these include the various color markings and tall, erect ears. The bodies of Savannahs are long and leggy&mdash;when a Savannah is standing, their hind-end is often higher than their shoulders. The head is taller than wide, and they have a long slender neck.

Most F1 generation Savannahs will possess many or all of these traits, while their presence often diminishes in later generations. Being a hybridized-breed of cats, appearance can vary far more than cat owners may be used to. Photos of different generations can be found at the [http://www.savannahcatclub.com/generations_of_savannahs.htm Savannah Cat Club] and [http://www.s-i-m-b-a.org/f1.htm SIMBA] websites.

As Savannahs are produced by ing Servals and domestic cats, each of Savannahs is marked with a filial number. For example, the cats produced directly from a Serval/domestic Cat cross are the , and they are typically 50% serval (although if a F1 Savannah is used as the domestic parent, the percentage of Serval blood can jump to 75%). The F2 generation, which has a Serval and is the offspring of the F1 generation, is 25% Serval. The F3 generation has a Serval , and is 12.5% Serval. Earlier generation Savannahs are typically more expensive to purchase due to scarcity. A Savannah/Savannah cross may also be referred to by breeders as "SVxSV" (SV is the TICA code for the Savannah breed), in addition to the filial number.

Being Hybrids, Savannahs typically exhibit some characteristics of . Because the male Savannah is the heterozygous sex, they are most commonly affected, in accordance with . Male Savannahs are typically larger in size and sterile until the F5 generation or so, although the females are fertile from the F1 generation and so on. As a result, females are usually more expensive than males, especially when sold for the explicit purpose of breeding.

Savannahs have been described as friendly, assertive, active, playful and interested in dogs and children.

Savannahs often greet people with head-butts, or an unexpected pounce. Some Savannahs are reported as being very social and friendly with new people, and other cats and dogs, while others may run and hide or revert to hissing and growling when seeing a stranger. Exposure to other people and pets is most likely the key factor in sociability as the Savannah kitten grows up.

Owners of Savannahs say that they are very impressed with the intelligence of this breed of cat.Fact|date=June 2007 An often noted trait of the Savannah is its [http://www.youtube.com/watch?v=OCcfymXQkM4 jumping] ability. Savannahs are known to jump up on top of doors, refrigerators and high cabinets. Some Savannahs can leap about 8 feet (2.5 m) high from a standing position. Savannahs are very inquisitive, and have been known to get into all sorts of things; they often learn how to open doors and cupboards, and anyone buying a Savannah will likely need to take special precautions to prevent the cat from getting into things.

Water isn't a fear of the Savannah cat; many will play or even immerse themselves in water. Presenting a water bowl to a Savannah may also prove a challenge, as some will promptly begin to "bat" all the water out of the bowl until it is empty, using their front paws.

Vocally, Savannahs may either like their Serval father, like their domestic mother, or do both, sometimes producing sounds which are a mixture of the two. Chirping, when present, is observed more often in earlier generations. Savannahs may also "hiss"&mdash;a Serval-like hiss is quite different from a domestic cat's hiss, sounding more like a very loud snake hiss, and can be alarming to humans not acquainted to such a sound coming from a cat. Hissing, and even aggressive behavior which involves hissing, is more frequent in F1 or occasionally F2 generations, and may subside or disappear as the cat is socialized.

Savannahs are considered to have . Different individuals contain different amounts of Serval and of varied domestic cat breeds, and there are currently no established Savannah breed-specific health issues.

Some veterinarians have noted that Servals have smaller livers relative to their body size than domestic cats, and some Savannahs inherit this. For this reason, care is advised in prescribing some medications. Lower doses per weight of the cat may be necessary. In addition, the blood values of Savannahs may vary from the typical domestic cat, due to the serval genes.

There is much anecdotal evidence that Savannahs and other domestic hybrids (such as Bengals) do not respond well to anesthesia containing Ketamine. Many Savannah breeders request in their contracts that Ketamine not be used for surgeries.

Some (but not all) experienced Savannah breeders believe strongly that modified live vaccines should not be used on Savannahs, that only killed virus vaccines should be used.

Some breeders state that Savannah cats have no known special care or food requirements, while others recommend a very high quality diet with no grains or by-products. Some recommend a partial or complete raw feeding/raw food diet with at least 32% protein and no by-products. Servals often require calcium and other supplements (unless fed a natural, complete and raw diet), especially when growing, and some Savannah breeders recommend supplements as well, especially for the earlier generations. Others consider it unnecessary, or even harmful. Issues of Savannah diet are not without controversy, and again, it is best to seek the advice of a or exotic cat specialist before feeding a Savannah cat any non-standard diet.

Laws governing ownership of Savannah cats in the vary according to state. Most notably, "hybrid cats"&mdash;defined as a domestic/wild species cross&mdash;such as the Savannah are illegal to own as pets in the state of as of 2005. [cite web|title = What's Up, Pussycat? Whoa!| accessdate = 2006-08-26|url = http://www.nytimes.com/2005/05/12/fashion/thursdaystyles/12cats.html?pagewanted=1&ei=5070&en=3ebc2281c2e9dece&ex=1156737600] The majority of states, however, follow federal and code which define wild/domesticated hybrid crosses as domesticated.

Other states known to have laws restricting hybrid cat ownership include but are not necessarily limited to: Alaska, Iowa, Hawaii, Massachusetts, and Georgia. Savannahs more than five generations from the Serval are allowed to be owned in New York state, but not in the city of New York.

The Australian Federal government was investigating whether to ban the Savannah cat, as it could potentially threaten the country's native wildlife. [16/06/2008 "Govt may prohibit supercat breed: Wong" http://www.abc.net.au/news/stories/2008/06/16/2276346.htm] A government report into the proposed importation of the cats has warned the hybrid breed may introduce enhanced hunting skills into feral cat populations and put keystone native species at risk. The report states that the Savannah cats are not worth the risk. [Cooper, D. 23/6/08 "Savannah cats not worth risk, says report" http://www.abc.net.au/science/articles/2008/06/23/2283148.htm?site=science&topic=latest] ["The Age", "Savannah cats banned from Australia", [http://news.theage.com.au/national/savannah-cats-banned-from-australia-20080803-3p2n.html] ] It is worth noting that no specific evidence on Savannah behavior was presented in the Risk Assessment report, the report assumed danger without substantiation from any reliable source. [ "savannah-cat-assessment-report", [24 July 2008] [http://www.environment.gov.au/biodiversity/trade-use/publications/pubs/savannah-cat-assessment-report.pdf] ]