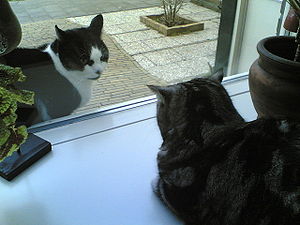 A primary method by which cats communicate is through body language, such as the position of the ears.

Cat communication is the range of methods by which cats communicate with other cats, humans, and other animals. Communication methods include postures, movement (including "quick, fine" movements are made but not generally perceived by human beings), and auditory and chemical signals.[1]

The communication methods used by cats have been affected by the domestication process.[2] 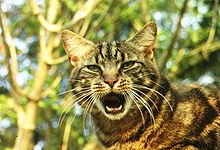 A meow is a sound used by cats to signal a request to their mother or to a human being. Adult cats do not meow to each other, and so the meowing to human beings that domesticated cats exhibit is likely partly an extension of the use by kittens of this plaintive signal.[3]

A purr is a sound made by most species of felines. A tonal buzzing can characterize differently between cats. Domestic cats purr in a frequency of 25 to 150 vibrations per second. Purring is often understood as signifying happiness;[5] however, cats sometimes purr when they are ill, or during tense, traumatic, or painful moments.[6]

There is no unique anatomical feature that is clearly responsible for the sound.[7]

A cat hissing and arching its back to make itself appear larger to ward off a threat. 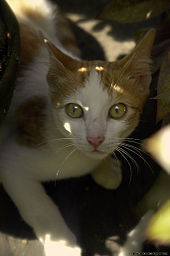 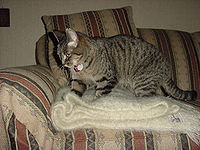 A mackerel tabby cat kneading a blanket before a nap. Note the forward position of the whiskers, indicating happiness or curiosity. 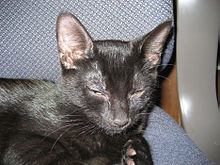 Most cats growl or hiss when angered or feeling threatened, which serves as a warning to the offending party. If the warning is not heeded, a more serious attack may follow. Some may engage in behavior or batting with their paws, with claws either extended or retracted. Cats sometimes make chirping or chattering noises when observing prey.

The cry of a cat in heat is called a caterwaul.[8]

Cats communicate a variety of messages using body language. Examples include arching their backs as a signal of fear or aggression, and slowly blinking to signal relaxation. A cat that chooses to lie with its stomach and chest exposed conveys trust, and comfort (this is also typical of overweight cats, as it is more comfortable for them); however, a cat may also roll on its side or back to be able to defend itself with all four sets of claws. Usually other signs (like ears and whiskers folded backwards) give an indication of the cat's overall mood. Flattened ears mean that the cat feels threatened, and may attack. Mouth open and no teeth exposed suggests a feeling of playfulness.[9]

The tail is often used as a signaling mechanism. A tail held high suggests happiness or confidence, or it can be used as a friendly greeting towards human beings or other cats (usually close relatives), while a half-raised tail shows less pleasure, and unhappiness is indicated with a tail held low. In addition, a cat's tail may "wag" or move rapidly to express a state of conflict. A cat with its tail held high and twitching shows excitement, but this is often mistaken for anger. Cats will twitch the tips of their tails when hunting or when irritated, while larger twitching indicates displeasure. They may also twitch their tails when playing.[10] A scared or surprised cat may puff up its tail, and the hair along its back may stand straight up and the cat will turn its body sideways to a threat, in order to increase its apparent size. Tailless cats, such as the Manx, which possess only a small stub of a tail, move the stub around as if they possess a full tail.

Touching noses is a friendly greeting for cats, while a lowered head is a sign of submission. Some cats will rub their faces along their guardian's cheek, hands, or ankles as a friendly greeting or sign of affection. This action is also sometimes a way of "marking their territory", leaving a scent from the scent glands located in the cat's cheeks. More commonly, a cat will do a "head bonk" (or "bunt"), i.e., bump someone with the front part of its head to express affection.[11] 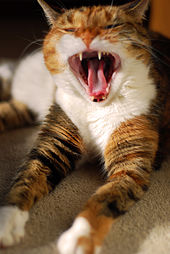 Cats also lick each other and people (e.g. their owners). Cats lick each other to groom one other and to bond (this grooming is usually done between cats who know each other very well). They will also sometimes lick people for similar reasons. These reasons include wanting to "groom" people and to show them care and affection.

Cats may paw their human companions, or a soft object on which they may be sitting, with a kneading motion. Cats often use this action alongside purring to show contentment and affection for their companions. This can also indicate curiosity. A cat may also do this when in pain or dying, as a method of comforting itself. It is instinctive to cats, and they use it when they are young to stimulate the mother cat's breast to release milk during nursing. As a result, cats hand-raised by human beings may not exhibit this behavior. Pawing is also a way for cats to mark their territory. The scent glands on the underside of their paws release small amounts of scent onto the person or object being pawed, marking it as "theirs" the same way they would urinate to mark their territory. Since the nature of the activity is an instinctive response related to the mother's care for the kitten, it may be an expression of need, indicating an empty water bowl, hunger, an unappealing litter box, or the need for some attention from the caregiver.

Although a gentle bite can signify playfulness, bites that are accompanied by hissing or growling do not signify playful behavior. During play, a cat can become overexcited, which can result in bites that, while intended only to be playful, can be strong enough to draw blood.

When cats mate, the male tom bites the scruff of the female's neck as she assumes a position conducive to mating.[12]

Cats can communicate through scent via urine, feces, and chemicals in skin glands located around the mouth, tail, and paws. They also use scent in order to mark their territory. If another animal tries to get in the cat's territory, it will fight for the territory, or the cat will scare the animal off. Urine spraying is also a territorial marking.[13] Cats rub up against furniture or doorways to mark the items as "theirs". When cats rub people, they are marking them with their scent, claiming them as "theirs". In addition, they are picking up the peoples' scents.