Deal or No Deal Canada

Deal or No Deal Canada

Deal or No Deal Canada is the Canadian-English version of the show Deal or No Deal, which premiered on February 4, 2007. The show ran on the Global Television Network, and lasted 5 episodes.

The host of the U.S. version, Canadian-born Howie Mandel, hosts the Canadian version of the show. The producer and director of the US version, Scott St. John and R. Brian DiPirro, respectively, also came to Canada to produce this version.

The show was taped at the Canadian Broadcasting Centre in Toronto on January 23, 24 and 25, 2007 after receiving 112,767 applicants from prospective players.

The first episode aired on Sunday, February 4. This episode attracted 2.7 million viewers, making it the single highest rated Canadian program ever on Global [1]. The remaining episodes aired over the following four consecutive Thursdays, with the finale on March 1, 2007.

It is currently unknown whether Global will be picking up the show for a full-season run, despite great ratings from the show. At this point in time, it is presumed that plans for a full season have been shelved. 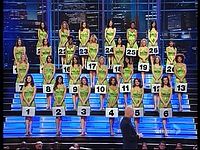 Deal or No Deal Canada's 26 models. 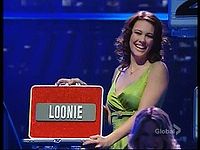 Jill Clark has some good news for the contestant as she opens up the loonie ($1) case. The red felt background in the cases was later adopted for the American series.

Five of the 26 models were selected from casting calls in Vancouver, Calgary, Winnipeg, Toronto, and Montreal, joining 21 other professionally-hired models. The full list is as follows:

Despite being a Canadian native, Leyla Milani (who holds Case #13 on the US version) is not one of the models on the Canadian version. 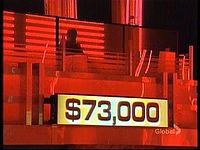 The banker makes an offer for the contestant to leave the game. Notably, the skybox is open and the banker stands throughout play.

The amounts remain the same as the American edition, except for the re-labeling of the $1 value using the common nickname "loonie", the addition of a "toonie" case, and the removal of the $400,000 value. All amounts are in Canadian dollars, tax-free. 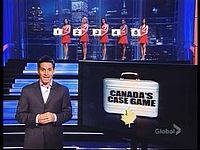 Presented by ET Canada correspondent Rick Campanelli, Canada's Case Game is modelled after the American Lucky Case Game. During commercials, five cases are displayed by a selection of the models. Viewers are invited to choose a case by texting a number (at a cost of $1 per message) or entering at globaltv.com, with the winning case displayed at the end of the program and all those who selected that case being entered in the draw for the grand prize.

However, the prize in this Case Game is not cash; prizes that have been offered include a Pontiac G6 convertible (in connection with Pontiac's sponsorship of the show) and trips for 12 from Sunquest Vacations.

In the first episode, entry volume was so high that the contest had to be extended one hour.

Winners of Canada's Case Game are revealed the following evening on ET Canada.

In addition to Pontiac, Rogers is also a main sponsor of Deal or No Deal Canada. The red-coloured telephone on the show is product placement for Rogers.

In connection with this sponsorship arrangement, some of the case models appeared on Rogers Sportsnet on February 27, 2007 during their annual NHL Trade Deadline show[citation needed].

Through 7 games and 5 episodes

Episode 1: Brian Traynor, a firefighter for the Canadian Forces from Medicine Hat, Alberta, dealt for $109,000 with six cases remaining (including $750,000). His case (#5) contained only $400. Theresa Daranciang's game was interrupted at the end of the third round, with the $300,000 as the highest value left in play.

Episode 2: Theresa Daranciang, a Mountie from Portage la Prairie, Manitoba, continued her game with $300,000 still on the board. With five cases remaining, she accepted a deal for $78,000; however, her case (#15) contained the $300,000. Donald Lucas, an 85-year-old grandfather from Grimsby, Ontario (affectionately referred to as "Grandpa" by the audience and models) had a rough game, eliminating a number of high-valued cases early including the million dollar case on his first pick. He settled for an $18,000 deal with three cases left, only to find that $50,000 was in his case (#14) all along. Former NHL player Darryl Sittler made a cameo appearance in Donald's game to provide advice. [2]

Episode 3: Michael George, a elementary teacher from Brampton, Ontario and coach for a basketball mentorship program, became the largest winner so far by accepting a $144,000 deal with five cases left in play. Despite a strong start, he only had $750,000 left on the board by the end of his game, and kept in play through the post-deal playout to receive theoretical offers in excess of $400,000. However, Michael's case (#26) contained only $75, making his deal the best so far. Notably, he promised to donate half of his winnings to his program, which he said played a role in his decision to deal. Toronto Raptors players T. J. Ford and Chris Bosh made taped appearances in Michael's game.

Episode 4: Jenny Monaco, a mother to be from Montreal, Quebec, set yet another record. Her first offer was $46,000, the highest first offer so far. She managed to avoid opening the top six amounts until the third round, and she set a new record for most money won, dealing for $215,000. To her dismay, in her post-deal playout, she opened up low amounts, leaving her with offers to as high as more than $600,000. To add insult to injury, her case (#15) had the million, making her not only the biggest winner, but having made the worst deal so far.