Juan de la Cierva y Codorníu, 1st Count of De La Cierva (21 September 1895 – 9 December 1936) was a Spanish civil engineer, pilot and aeronuatical engineer. His most famous accomplishment was the invention in 1920 of the Autogiro, a single-rotor type of aircraft that came to be called autogyro in the English language. After four years of experimentation, De la Cierva developed the articulated rotor which resulted in the world's first successful flight of a stable rotary-wing aircraft in 1923 with his C.4 prototype.

De la Cierva was born in Murcia, Spain to a wealthy family. After several successful experiments with aviation as a boy, he eventually earned a civil engineering degree. He moved to England in 1925, where with the support of Scottish industrialist James G. Weir, he established the Cierva Autogiro Company.

At the outbreak of the Spanish Civil War, De la Cierva supported the forces of Francisco Franco, helping the rebels to obtain the De Havilland DH-89 'Dragon Rapide' which flew General Franco from the Canary Islands to Spanish Morocco. His brother was killed by the Republican army in Paracuellos del Jarama.

De la Cierva started building aircraft as early as 1912, and in 1919 he started to consider the use of a rotor to generate lift at low airspeed, and eliminate the risk of stall. 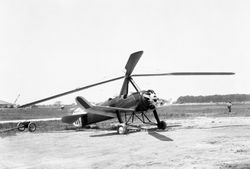 Pitcairn PCA-2 autogyro, build in the U.S. under Cierva license.

In order to achieve this, he utilised the ability of rotor to autorotate, whereby at a suitable pitch setting, a rotor will continue to rotate without mechanical drive, sustained by the torque equilibrium of the lift and drag forces acting on the blades. This phenomenon was already known,[1] and was available as a safety feature to allow controlled descent in the event of engine failure. With De la Cierva's autogiro, the rotor was drawn through the air by means of conventional propeller, with the result that the rotor generated sufficient lift to sustain level flight, climb and descent.

Before this could be satisfactorily achieved, De la Cierva experienced several failures primarily associated with the unbalanced rolling movement generated when attempting take-off, due to asymmetry of lift between the advancing and retreating blades. This major difficulty was resolved by the introduction of the flapping hinge. In 1923, De la Cierva's first successful Autogiro was flown in Spain by Lt. Gomez Spencer.

This pioneering work was carried out in De la Cierva's native Spain. In 1925 he brought his C.6 to England and demonstrated it to the Air Ministry at Farnborough, Hampshire. This machine had a four blade rotor with flapping hinges but relied upon conventional airplane controls for pitch, roll and yaw. It was based upon an Avro 504K fuselage, initial rotation of the rotor was achieved by the rapid uncoiling of a rope passed around stops on the undersides of the blades.

The Farnborough demonstration was a great success, and resulted in an invitation to continue the work in the UK. As a direct result, and with the assistance of the Scottish industrialist James G Weir, the Cierva Autogiro Company, Ltd., was formed the following year. From the outset De la Cierva concentrated upon the design and the manufacture of rotor systems, relying on other established aircraft manufacturers to produce the airframes, predominantly the A.V. Roe Company.

The Avro built C.8 was a refinement of the C.6, with the more powerful 180hp Lynx radial engine, and several C.8s were built. The C.8R incorporated drag hinges, due to blade flapping motion causing high blade root stresses in the rotor plane of rotation; this modification, however, resulted in other problems such as ground resonance for which drag hinge dampers were fitted.

The resolution of these fundamental rotor problems opened the way to progress, confidence built up rapidly, and after several cross country flights a C.8L4 was entered for the 1928 Kings Cup Air Race. Although forced to withdraw, the C.8L4 subsequently completed a 4,800 km (3,000 mi) tour of the British Isles. Later that year it flew from London to Paris, extending the tour to include Berlin, Brussels and Amsterdam, thus becoming the first rotating wing aircraft to cross the English Channel.

A predominant problem with the autogiro was driving the rotor prior to takeoff. Several methods were attempted in addition to the coiled rope system, which could take the rotor speed to 50% of that required, at which point movement along the ground to reach flying speed was necessary, while tilting the rotor to establish autorotation.

Another approach was to tilt the tail stabiliser to deflect engine slipstream up through the rotor. The most acceptable solution was finally achieved with the C.19, which was produced in some quantities; a direct drive from the engine to the rotor was fitted, through which the rotor could be accelerated up to speed. The system was then declutched prior to executing the take-off run.

As De la Cierva's autogiros achieved success and acceptance, others began to follow and with them came further innovation. Most important was the development of direct rotor control through cyclic pitch variation, achieved initially by tilting the rotor hub and subsequently by Raoul Hafner by the application of a spider mechanism that acted directly on each rotor blade. The first production direct control autogiro was the C.30, produced in quantity by Avro, Liore et Olivier, and Focke-Wulf.

The introduction of jump take-off was another major improvement in capability. The rotor was accelerated in no-lift pitch until the rotor speed required for flight was achieved, and then declutched. The loss of torque caused the blades to swing forward on angled drag hinges with a resultant increase in collective pitch, causing the aircraft to leap into the air. With all the engine power now applied to the forward thrusting propeller, it was now possible to continue in forward flight with the rotor in autorotation. The C.40 was the first production jump takeoff Autogiro.

Autogiros were built in many countries under De la Cierva licences, including France, Germany, Japan, Russia and USA.

Though De la Cierva's initial motivation was to produce an aircraft that could not stall, towards the end of his life he accepted the advantages offered by the helicopter. In 1936, the Cierva Autogiro Company, Ltd., responded to a British Air Ministry specification for a Royal Navy helicopter with the gyrodyne. It is perhaps an ironic twist of fate that De la Cierva should die in an airliner accident in Croydon at the age of 41.

On the morning of 9 December 1936, he boarded a Dutch DC-2 of KLM at Croydon Airfield, bound for Amsterdam. After delay caused by heavy fog the airliner took off at about 10:30 am but drifted slightly off course after takeoff and exploded after flying into a house on gently riding terrain at the south of the airport.

De la Cierva’s work on rotor dynamics and control made possible the modern helicopter, whose development as a practical means of flight had been prevented by these problems. The understanding that he established is applicable to all rotor-winged aircraft.

De La Cierva's death in an aeroplane crash prevented him from fulfilling his plans to build a useful and reliable aircraft capable of hovering but it was his technology and the vision outlined in his writings and speeches that was used to achieve this goal shortly after his death. Technology developed for the autogyro was used by experimenters in the development of the Fw 61, which was flown in 1936 by Cierva Autogiro Company licensee Focke-Achgelis. His innovations led to the Cierva C.38 Gyrodyne, which utilized a powered rotor for hovering and low speed flight, and a side-mounted propeller for torque correction and propulsion in cruise flight. This was followed by the development of the Fairey Gyrodyne, first flown in 1948, proving Cierva's argument that such an aircraft would be superior to a helicopter, which he regarded as excessively complex.