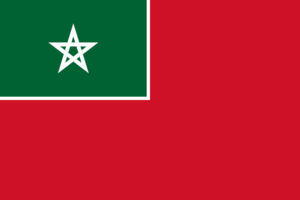 Spanish protectorate of Morocco ( _ar. حماية إسبانيا في المغرب) ( _es. Protectorado español de Marruecos) was the area of under colonial rule by the , established by the in 1912 and ending in 1956, when both and recognized Moroccan .

The city of was declared an , though this status was suspended during World War II when it was provisionally occupied by Spanish troops, from 14 June 1940, on the pretext that an Italian invasion was imminent [C.R. Pennel, Morocco Since 1830, A History] .

The led by the guerilla leader was a breakaway state that existed in the region from 1921 to 1926, when it was dissolved by joint expedition of the and French forces.

had been Portuguese before becoming Spanish in 1580. The city of had been part of Spain since 1497. As for the rest of territories other than these , most of them they were only gained after by the middle of the 19th century and, specially, after 1912 and the .

In the late 19th century, Queen encouraged the officers of southern Spain to curb the migration of unauthorized poor Spaniards to the new territories.

The Protectorate system was established during the , technically it didn't include the cities of Ceuta and Melilla, which had been part of Spain from an early moment of its history and so were regarded as Spanish proper territory.

The Moroccan Jews—many of them living in this part of the Maghreb after being expelled from Spain and Portugal in 1492 and 1497 respectively after the end of the process—flourished in commerce, profiting from the similarity of Spanish and Ladino language and benefitting from the area in Tangier and a flourishing trading activity in the area.

The radical Party advocated an anti-colonialist policy whereby the Republican Government would support the independence of Spanish protectorate of Morocco and in this way touch off a rebellion at Franco's back and disaffection among the Moroccan troops fighting in Spain. However, the Republican Government rejected any such idea - which would have likely resulted in conflict with France, the colonial ruler of the other portion of Morocco - and the Arab troops remained loyal to the Nationalist cause.

After came to power in Spain, paradoxically, the protectorate enjoyed more political freedom than Franco-era Spain properFact|date=August 2007, allegedly because local Muslim troops were loyal from the very beginning to Franco, who was serving in "África"—as the Protectorate was informally known in the Spanish military parlance. Franco was the military commander of the Spanish protectorate of Morocco at the time of his uprising and from there he started it. He was backed by a noticeable number of Moroccan Muslim troops in the following . Franco was based in .

Thus, there were political parties in the Protectorate—unlike in the rest of Spain—and the Moroccan nationalist press would criticize the Spanish authorities, contrasting with the Spanish single party and state-controlled press in the rest of the country.Fact|date=August 2007

In 1956, when became independent, Spain discontinued the Protectorate and surrendered most of its occupied territories to the newly independent Morocco but retained control of certain regions, including: Ceuta, Melilla and the rest of "plazas de soberanía", , and the ( and regions). The waged a war against Spanish forces, that started from Ifni and spread south to Rio de Oro. As a result of this war, Spain in 1958 returned Tarfaya to Morocco. Morocco continued to lay claim over the remaining regions, and in 1969, it obtained the region of Ifni.

Morocco claims and as integral parts of the country, considering them to be under foreign occupation, comparing their status to that of , while Spain regards them as constituent parts of its territory.