Cleveland Stadium (commonly Lakefront Stadium and Cleveland Municipal Stadium) was a multi-purpose stadium, located in Cleveland, Ohio. In its final years, the stadium seated 74,438, for baseball and 81,000, for football. It was one of the early multi-purpose stadiums, built to accommodate both baseball and football. It was demolished in 1996 to make way for Cleveland Browns Stadium, which now stands on the site.

The impetus for Cleveland Stadium came from city manager William R. Hopkins, Cleveland Indians' president Ernest Barnard, real estate magnate and future Indians' president Alva Bradley, and the Van Sweringen brothers, who thought that the attraction of a stadium would benefit area commerce in general and their own commercial interests in downtown Cleveland in particular.[2] However, some have incorrectly stated that it was built in a failed bid to attract the 1932 Summer Olympics, which had been awarded to Los Angeles before ground was broken on the stadium.[3] That misconception may have contributed to some in the media calling the stadium, "The Mistake by the Lake". Another common misconception is that Cleveland Stadium, was a Works Progress Administration project; in fact, the WPA was not created until 1935, four years after the stadium was built.

Cleveland Stadium under construction in 1931

Built during the administrations of city managers William R. Hopkins and Daniel E. Morgan, it was designed by the architectural firms of Walker and Weeks and by Osborn Engineering. It featured an early use of structural aluminum.

The stadium was dedicated on July 1, 1931. On July 3, 1931, it hosted a boxing match for the National Boxing Association World Heavyweight Championship between Max Schmeling and Young Stribling, with 37,000 fans in attendance. Schmeling retained his title by a technical knockout (t.k.o)-victory in the 15th round.

The Donald Gray Gardens were installed on the stadium's north side in 1936 as part of the Great Lakes Exposition.

The stadium was built for football as well as for the Cleveland Indians, who played their first game there on July 31, 1932, losing to the Philadelphia Athletics' great pitcher Lefty Grove 1-0 while attracting a then-major-league-record crowd of 80,184.[6] The Indians played all of their games at the stadium from the middle of the 1932 season through 1933. However, the players and fans complained about the huge outfield, which reduced the number of home runs. Moreover, as the Great Depression worsened, attendance plummeted.[7] In 1934 the Indians moved most of their games back to their smaller previous home, League Park.

In 1936, the Indians began playing Sunday and holiday games at Cleveland Stadium during the summer. Beginning in 1938, they also played selected important games there. Starting in 1939, they played night games there as well because League Park didn't have lights. By 1940, the Indians played most of their home slate at Cleveland Stadium, abandoning League Park entirely after the 1946 season. They played there until the end of the 1993 season, after which they moved to Jacobs Field (which was later named Progressive Field).[8] 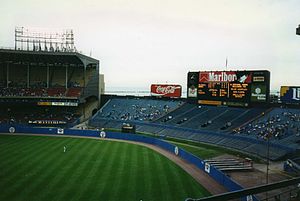 View of center field in 1993. Lake Erie can be seen just outside the stadium, as well as some of the original larger outfield area.

The stadium anticipated problems that would emerge 40 years later when cookie-cutter stadiums were in vogue. Due to the fundamentally different sizes and shapes of baseball and football fields, the baseball sight lines generally left much to be desired. The original baseball playing field was so large that an inner fence was constructed in 1947 to cut down the size of the spacious outfield. Even after it was put in, the distance markers on the bleacher walls remained visible for many years; it was 470 feet from home plate to the bleachers in straightaway center field. No player ever hit a home run into the center field bleachers. Ted Williams hit the only inside-the-park home run of his career at Cleveland Stadium before the inner fence was installed. According to his own autobiography, Veeck - As in Wreck, Indians owner Bill Veeck would move the fence in or out, varying by as much as 15 feet, depending on how it would favor the Indians, a practice that ended when the American League specifically legislated against moving fences during the course of a given season.

Like some other facilities built before warning tracks became standard, the stadium had an earthen berm in front of the center field wall. After the inner fence was installed, the berm was still visible during football season.

The facility, located just south of Lake Erie, was known for the biting cold winds that would blow into the stadium in winter and, for that matter, during much of the spring and fall. Because of its proximity to the lake during hot summer nights, its lights attracted swarms of midges and mayflies. Game 2 of the 2007 American League Division Series, in Jacobs Field on October 5, 2007, brought back memories of the old stadium, when swarms of midges (misidentified by the television announcers as mayflies) infested the field, particularly the pitcher's mound.

In 1948, when the Indians won the American League pennant and World Series behind pitcher Bob Feller and shortstop/player-manager Lou Boudreau, the Indians set three Major League attendance records: they had the highest single season attendance, 2,620,627, which was not eclipsed until the 1962 Los Angeles Dodgers,[9] largest regular season night game attendance of 72,434 for the first major league start of Satchel Paige,[10] and biggest World Series game attendance of 86,288 for game 5 on October 10, 1948.[11] However, during the Indians' lean years from the 1960s through the 1990s, they rarely attracted more than 30,000 people, and even crowds of 40,000 looked sparse in the cavernous environment.

In 1949, after the Indians lost the pennant to the New York Yankees, as a black humor-themed promotion they held a mock funeral procession on the field and buried their 1948 championship flag in the outfield. Interestingly enough, the Indians have not won a World Series since, coming as close as the final inning in 1997. On four separate occasions, it hosted the All-Star Game: 1935, 1954, 1963, and 1981. The 1981 All-Star Game was notable for two reasons: it was the first game after the conclusion of the players' strike of that year, and it was held the day after a Cleveland Browns exhibition football game. On May 15, 1981 it was the site of Len Barker's perfect game. On its last day as home of the Indians on October 3, 1993, the team's fans, led by comedian Bob Hope, who grew up an Indians fan and was once a part-owner, sang a version of his signature song "Thanks for the Memory" with special lyrics for the occasion.

Cleveland Municipal Stadium was the first home of the Cleveland Rams, which became a charter member of the second American Football League in 1936. After finishing second in the AFL, the Rams left the league for the National Football League in 1937, but stayed in their original home for one more year before moving to Shaw Stadium.

The center field bleachers at the east end of the stadium were home to many of the club's most avid fans and became known during the 1980s as the Dawg Pound after the barks that fans made to disrupt opposing teams' offensive plays. The fans were copying Browns players Hanford Dixon and Frank Minnifield, who frequently appeared to bark to each other and to the opposition. Some of the fans even wore dog masks and threw dog biscuits at opposing players.

The only Great Lakes Bowl was held there in 1947.

In addition to sporting events, the stadium hosted a number of other events, including the World Series of Rock from 1974-1980, featuring big-name acts, such as The Rolling Stones, Pink Floyd, The Beach Boys and Aerosmith. The Rolling Stones' July 1, 1978 concert of 82,238 attendees was reportedly the first concert to gross over $1,000,000.[14] The Series was discontinued following racial confrontations between whites and blacks in 1979.

On September 2, 1995, it hosted the inaugural Rock and Roll Hall of Fame concert, which featured James Brown, Johnny Cash, Bob Dylan, and The Allman Brothers Band, among others.[15]

The stadium also hosted numerous religious services. Its most heavily attended event was the Roman Catholic Church's Seventh Eucharistic Congress, hosted by the Diocese of Cleveland in 1935, which attracted 75,000 to a midnight mass on September 24, 1935 and an estimated 125,000 to Eucharistic service the following day.[16] One of the stadium's last events was a Billy Graham crusade, held in 1994.

Several scenes for the motion picture, The Fortune Cookie, were filmed during the game between the Browns and the visiting Minnesota Vikings on 31 October 1965. Much of the 1949 movie The Kid From Cleveland, in which Bob Feller, Lou Boudreau, Bill Veeck and Satchel Paige played themselves, was filmed there. Despite being set in the stadium, the motion picture Major League was not actually filmed in the stadium. While aerial distance shots of the actual stadium were used, Milwaukee County Stadium, whose grandstand interior looked similar to that of Municipal Stadium, was the actual stadium used for filming.[17] Some scenes in the 1991 made for TV Babe Ruth bio-pic movie, starring Stephen Lang as the Babe and with a cameo by Pete Rose as Ty Cobb, were filmed there.[18]

The stadium was an economic drain on the City of Cleveland, which owned it and originally operated it. In the mid-1970s, Browns owner Art Modell leased the facility for $1 per year. In exchange, Modell's newly formed company, Stadium Corporation, assumed the expenses of operations from the city. Stadium Corp. invested in improvements, including new electronic scoreboards and luxury suites. Renting the suites and the scoreboard advertising generated substantial revenue for Stadium Corp and Modell. Modell refused to share the suite revenue with the Indians baseball team, even though much of the revenues were generated during baseball games as well as during Browns games. Eventually the Indians prevailed upon the local governments and voters and convinced them to build them their own facility where they would control the suite revenue. However, the stadium's inadequacy was becoming apparent in any event; chunks of concrete were falling off and the pilings were starting to petrify.[19]

Modell, mistakenly believing that his revenues were not endangered, refused to participate in the Gateway Project that built Progressive Field for the Indians and Quicken Loans Arena for the Cavs. Modell's assumptions proved incorrect, and Stadium Corp.'s suite revenues declined sharply when the Indians moved from the stadium to Jacobs Field in 1994. The following year, Modell decided to move the football team to Baltimore, Maryland after the 1995 season.

Modell's move of the Browns breached the team's lease, and the City of Cleveland sued. After the suit was settled, the stadium was demolished the next year and the pieces were dumped into Lake Erie to create an artificial reef for fishermen and divers.[20]