Busch Memorial Stadium, also known as Busch Stadium, was a multi-purpose sports facility in St. Louis, Missouri that operated from 1966 to 2005.

The stadium served as the home of the St. Louis Cardinals National League baseball team for its entire operating existence, while also serving as home to the National Football League's Cardinals team from 1966 to 1987. It opened four days after the last baseball game was played in Sportsman's Park (which had also been known since 1953 as Busch Stadium).

Similar in style to other multi-purpose sports stadiums built during the same time period, it was sometimes referred to as a "Cookie cutter"-style stadium.

The stadium was designed by Sverdrup & Parcel and built by Grün & Bilfinger.[2] Edward Durrell Stone designed the park's most enduring feature, the roof's 96-arch "Crown of Arches,"[3] The Crown echoed the iconic Gateway Arch, which was completed only a year before Busch Stadium officially opened. It was one of the first multipurpose facilities built in the United States from the early 1960s through the early 1980s, along with those in Washington, New York, Houston, Atlanta, Pittsburgh, San Diego, Cincinnati, Philadelphia, Minneapolis and some others. The original design of the stadium had called for a baseball-only format, but the design was altered to accommodate football, a fact which arguably shortened its existence. The stadium was demolished by wrecking ball in late 2005, and part of its former footprint is used by its replacement stadium, the new Busch Stadium.

The baseball Cardinals had been looking for a stadium of their own as early as the 1940s. Although they had been the tenants of the St. Louis Browns at Sportsman's Park since 1920, they had long since passed the Browns as St. Louis' favorite team. After several false starts and the demolition of Chinatown, St. Louis for space for the stadium, ground was finally broken in May 1964. 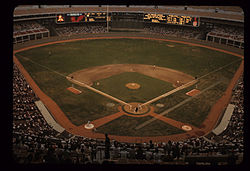 Cardinals game at Busch Stadium, circa 1966.

When it opened it was known as Civic Center Busch Memorial Stadium (though the "Civic Center" was almost never used in the media) until New Year's Day 1982, when it became just Busch Stadium. The stadium's name came from the Busch family of Anheuser-Busch, who owned the baseball team until March 1996 and championed the stadium's construction.

The grounds were home to bronze statues of Stan Musial, Enos Slaughter, Dizzy Dean, Rogers Hornsby, Red Schoendienst, Lou Brock, Bob Gibson, James 'Cool Papa Bell, George Sisler, Jack Buck and most recently, Ozzie Smith. The stadium's playing surface, originally natural grass, was replaced with Astroturf in 1970 because St. Louis' typically hot summers made it difficult to keep the grass alive. Originally, the Cardinals continued to use a full dirt infield, but replaced it with an all-Astroturf infield (except for sliding pits around the bases) in 1976.

By the early 1990s, the stadium appeared to be falling into disrepair. Following Busch's last 1995 event (the Rams' last home game prior to the opening of the now-Edward Jones Dome), the Cardinals began a massive project to retrofit it into a baseball-only stadium. A large section of the upper deck outfield seats was closed. In its place, a hand-operated scoreboard and several flags commemorating the Cardinals' retired numbers were installed. The stadium's AstroTurf field was torn up and replaced with natural grass, and the outfield walls were repainted green from their original blue. 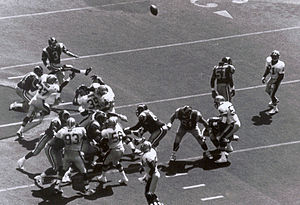 The Rams played outdoors at Busch Stadium against the New Orleans Saints, 1995.

Busch Stadium was the home of the St. Louis Cardinals of the National Football League, beginning with that team's 1966 season. They remained there through the 1987 season. However, the stadium was one of the smaller facilities in the NFL, never seating more than 60,000. After efforts to get a larger stadium failed, owner Bill Bidwill moved the team to Phoenix, Arizona after the 1987 season.

Busch Stadium was also briefly the home of the St. Louis Rams, who relocated from Anaheim Stadium in Anaheim, California, to move into the new and nearby Trans World Dome, later renamed the Edward Jones Dome. Since construction on their new home was delayed, the Rams played their first four 1995 games at Busch Stadium.

The stadium never hosted a playoff game during the Cardinals' 28-year run in St. Louis. The "Gridbirds" made only three playoff appearances during that stretch, losing at the Minnesota Vikings in 1974, Los Angeles Rams in 1975 and Green Bay Packers in 1982. 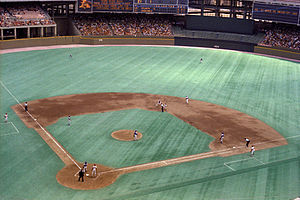 Lou Brock stealing at Busch Stadium vs the Atlanta Braves, 1975.

The stadium was also the site of Mark McGwire's historic 62nd home run of the 1998 season that broke Roger Maris' single-season record, and also of McGwire's 70th of that season, for a record which lasted until Barry Bonds surpassed it in 2001. The dimensions in center and the power alleys had been altered from time to time over the years. Initially the park was very favorable to pitchers, with spacious outfield dimensions. Consequently, its design (as well as the Astroturf surface) was favorable to the Cardinals' style of play for most of the time from the 1960s through the 1990s, which emphasized good baserunning and extra-base hits. Later changes attempted to make the outfield better balanced between pitching and power hitting.

The Beatles performed at the stadium during their final North American Tour on August 21, 1966.

The Rolling Stones performed at the stadium during their Steel Wheels Tour on September 17, 1989.

U2 performed at the stadium during their Zoo TV Tour on September 20, 1992.

Paul McCartney performed at the stadium during The New World Tour on April 29, 1993. This was his first performance at the stadium since The Beatles' final tour in 1966. 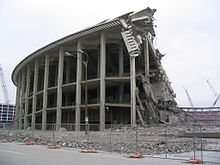 Old Busch Stadium in the process of being torn down.

Busch Memorial Stadium was originally slated to be imploded like most modern-day stadium demolitions to be able to finish construction on the new stadium in time for the 2006 season. However, due to fear of damaging the nearby Metro subway rail line and stadium station, it was decided to tear down the stadium with a wrecking ball piece-by-piece over a period of a few weeks.

Demolition of the stadium began at 3:07 Central Standard Time on November 7, 2005.

Current use and plans for site

Part of the footprint of the old stadium is now occupied by the outfield of the current stadium. The Cardinals had planned to build Ballpark Village on the site of the stadium ($320 million for the first phase). It was to consist of boutiques and restaurants, condominium apartments anchored by the new headquarters of Centene Corporation -- all to be built in time for the 2009 Major League Baseball All-Star Game.

None of the construction has occurred and locals derisively refer to its rain soaked unfinished status as "Lake Dewitt" -- after Cardinal President William DeWitt, Jr. The Cardinals in March 2009 announced the site would be used for a softball field and parking during the game.[4]

Because the stadium was an iconic symbol of St. Louis, it was seen in many films set in St. Louis.