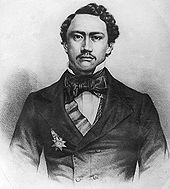 Kamehameha IV established the Anglican Church of Hawaii in 1862.

The Church of Hawaii, originally called the Hawaiian Reformed Catholic Church, was the national church of the Kingdom of Hawaii and a member of the Anglican Communion from 1862 to 1893.

As a young prince, King Kamehameha IV had visited England and was impressed by the rich ceremony of the Church of England, compared to the dour simplicity of the American missionaries who educated him as a child. His queen consort Queen Emma had a British grandfather and was brought up in a house of an Anglican British doctor. Their 1856 wedding ceremony included Anglican prayers, but had to be performed by the Congregationalist minister.

In 1859 Emma wrote to Queen Victoria of the U.K. to request a clergyman from the English church. The King's foreign minister Robert Crichton Wyllie also made requests through diplomatic contacts. In 1860 Samuel Wilberforce suggested expanding the mission to include a Bishop who could organize a new branch. William Ingraham Kip of the American Episcopal Church in California also supported the idea, but the American Civil War prevented any help from them.[1] The idea was approved by Archbishop of Canterbury John B. Sumner and British Foreign Secretary Lord John Russell. The first Bishop was Thomas Nettleship Staley, consecrated on December 15, 1861.[2]

The sending of Staley caused friction with the American Board of Commissioners for Foreign Missions even before he arrived in 1862; making him a Bishop bothered the Calvinists who disliked any kind of religious hierarchy. Rufus Anderson of the American Board became a fierce critic, accusing him of ritualism. The officially chartered name of "Hawaiian Reformed Catholic Church" provoked criticism as papist After Kamehameha IV died, an elaborate funeral service was held that was compared to a Pontifical High Mass.[1] 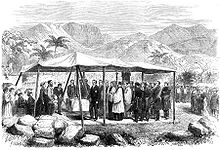 The Church of Hawaii became the official royal church, with land donated from the royal family's holdings, not the government. Emma was baptized, followed by a young David Kalākaua who would later also become king. The Royal Mausoleum was built with a private chapel, which contrasted to the simple unadorned graveyards preferred by earlier missionaries. Observance of the holidays of Christmas and Good Friday was begun. Since Kamehameha IV had died on the feast of Saint Andrew, the first cathedral constructed in Hawaii by his brother the new King Kamehameha V was called the Saint Andrew's Cathedral. The cornerstone was laid in 1867, and it became the official residence of the bishop. Two associated schools were also started: Saint Andrew's Priory School for Girls, and a boys' school named for Saint Alban, which eventually became part of ʻIolani School. Staley was even attacked by American writer Mark Twain and others whom he called "Puritans".[1]