Asa Thurston (1787–1868) and Lucy Goodale Thurston (1795–1876) were in the first company of American Christian Missionaries to the Hawaiian Islands.

Born in Fitchburg, Massachusetts, on October 12, 1796, Asa Thurston worked as a scythe maker until he was 22 years old. His father was Thomas Thurston and mother was Lydia Davis. He then attended and graduated from Yale College in 1816 and Andover Theological Seminary in 1819.[1]

He worked as a missionary for forty years, returning to New England only for the period 1840 to 1842, and went once to California in 1863. He built churches, schools, and had a following among the people. He was one of the first translators of the Bible into the Hawaiian language. He explored the islands with English missionary William Ellis, including viewing the volcano Kilauea. The Thurston lava tube in Hawaii Volcanoes National Park is named for his family. He suffered a series of strokes, and began speaking in a strange mixture of English, Hawaiian, and Latin. He moved to Honolulu and died on March 11, 1868.

Lucy Goodale was born on October 29, 1795, daughter of Abner Goodale, a Deacon in Marlborough, Massachusetts. She graduated from Bradford Academy and became a school teacher. The Thurstons, unlike most missionary couples, spent most of the rest of their lives in the islands. Lucy compiled her letters and other writings (completed by her daughter Persis Goodale Taylor) into one of the most vivid accounts of the early mission days. She died on October 13, 1876 in Honolulu. 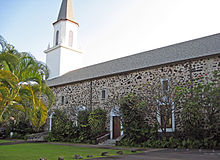 A native Hawaiian named Opukahaia, orphaned by the islands' wars, traveled to New England in 1809 (there is a monument to him in Punaluʻu) and learned to speak English. In 1818 his stories (along with a few other companions) about the islands convinced the American Board of Commissioners for Foreign Missions to send a company to Hawaii. Thurston and Hiram Bingham I, with whom he was ordained, were selected as leaders of the group which included a farmer, physician, three teachers, and a few native Hawaiian assistants. On October 12, 1819 he married Lucy Goodale, a cousin of a classmate. They set sail a few weeks later on October 23, 1819 from Boston for a five month voyage on the small merchant ship Thaddeus.

After landing at Kawaihae harbor on March 30, 1820 the Thurstons went first to Kailua-Kona, where they consulted with the British sailor John Young who was an advisor King Kamehameha I. They found the Hawaiian Religion in turmoil, due to the death of Kamehameha I, and the ending of the Kapu system by Queen Kaʻahumanu and King Kamehameha II.

They then traveled to Mauʻi, then to Oʻahu, and finally back to Kailua-Kona in 1823. With the blessing of Royal Governor John Adams Kuakini, he set up his congregation in a series of thatched huts. From about 1835 to 1837, he supervised the construction of the Mokuʻaikaua Church, made from stone, which still stands today. The Thurstons with five children began a family prominent in the history of the islands up to the present: Persis Goodale born September 28, 1821, Lucy Goodale born April 25, 1823, Asa Goodale born August 1, 1827, Mary Howe born June 3, 1831, and Thomas Gairdner born May 9, 1836.[1]

Their daughter Persis Goodale Thurston Taylor (1821-1906) was a Hawaiian-born painter and sketch artist. Their grandson Lorrin A. Thurston (1857–1931) was son of Asa Goodale and Sarah Andrews, daughter of missionary Lorrin Andrews of Maui. He was a leader of the 1893 overthrow of the Kingdom of Hawaii. Their great-great grandson is Thurston Twigg-Smith.