Norwegian Constitution Day is the National Day of Norway and is an official national holiday observed on May 17 each year. Among Norwegians, the day is referred to simply as syttende mai or syttande mai (both meaning May Seventeenth), Nasjonaldagen (The National Day) or Grunnlovsdagen (The Constitution Day), although the latter is less frequent. 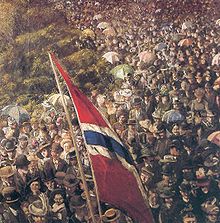 17th of May 1893 by Norwegian painter Christian Krohg (1852–1925). Note that the flag does not have the Union badge of Norway and Sweden, the so called sildesalaten (Herring salad).

The Constitution of Norway was signed at Eidsvoll on May 17 in the year 1814. The constitution declared Norway to be an independent nation.

After 1864[why?], the day became more established, and the first children's parade was launched in Christiania, in a parade consisting only of boys. This initiative was taken by Bjørnstjerne Bjørnson, although Wergeland made the first known children's parade at Eidsvoll around 1820. It was only in 1899 that girls were allowed to join in the parade for the first time.

By historical coincidence, the Second World War ended in Norway nine days before that year's Constitution Day, on May 8, 1945, when the occupying German forces surrendered. Even if The Liberation Day is an official flag day in Norway, the day is not an official holiday and is not broadly celebrated. Instead a new and broader meaning has been added to the celebration of Norwegian Constitution Day on May 17[citation needed].

The day focused originally on the Norwegian constitution, but after 1905, the focus has been directed also towards the royal family. 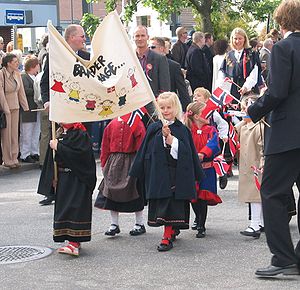 The kindergarten part of a Children's parade. Also notice the use of the Gákti, the traditional clothing of the Sami people.

A noteworthy aspect of the Norwegian Constitution Day is its very non-military nature. All over Norway, children's parades with an abundance of flags form the central elements of the celebration. Each elementary school district arranges its own parade[1] with marching bands between schools. The parade takes the children through the community, often making stops at homes of senior citizens, war memorials, etc. The longest parade is in Oslo, where some 100,000 people travel to the city centre to participate in the main festivities. This is broadcast on TV every year, with comments on costumes, banners etc., together with local reports from celebrations around the country. The massive Oslo parade includes some 100 schools, marching bands, and passes the royal palace where the royal family greet the people from the main balcony.

Typically a school’s children parade will consist of some senior school children carrying the school’s official banner, followed by a handful of other older children carrying full size Norwegian flags, and the school’s marching band. After the band the rest of the school children follow with hand sized flags, often with the junior forms first, and often behind self made banners for each form or even individual class. Nearby kindergartens may also have been invited to join in. As the parade passes, bystanders often join in behind the official parade, and follow the parade back to the school. Depending on the community, the parade may make stops at particular sites along the route, such as a nursing home or war memorial. In Oslo the parade stops at the Royal Palace while Skaugum, the home of the crown prince, has been a traditional waypoint for parades in Asker.

During the parade a marching band will play and the children will sing lyrics about the celebration of the National Day. The parade concludes with the stationary singing of the national anthem "Ja, vi elsker dette landet" (typically verses 1, 7 and 8), and the royal anthem "Kongesangen".

In addition to children's parades, there are parades for the public, where every citizen is welcome to join in. These are led by marching bands and often local boy scouts and girl guides, local choirs, etc. This takes place in the early morning or in the afternoon, before or after the school's parade.

All parades begin or end with speeches. Both grown-ups and older children are invited to speak. After the parades, there are games for the children, and often a lot of icecream, pop, sweets and hotdogs are consumed.

The city of Bergen is full of people, and May 17 has a strong tradition in this city.

Russ girls during the children's parade in Trondheim.

The graduating class from the Norwegian equivalent of high school - known as russ - has its own celebration on May 17, staying up all night and making the rounds through the community. The russ also have their own parades later in the day, usually around 4 or 5 PM. In this parade, russ will parade through the street with their russcars carrying signs and pickets. They may parody various local and political aspects, although recently this has become less frequent. Russ parades have lately become smaller and smaller due to diligent police discouragement.

Celebration across the country

In addition to the children's parades the streets are filled with young and old, turning out in festive attire, and vendors selling ice cream, hot dogs, and lately, kebabs.

Although May 17 is the National Day, it is an inclusive kind of nationalism. Therefore any foreigner who happens to be there on this day can expect to have a flag thrust into their hand and is welcome to join in with all activities. 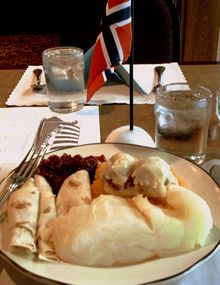 17 May dinner in the United States of lutefisk, rutabaga, meatballs, cranberries, and lefse.

Syttende Mai is also celebrated in many Norwegian immigrant communities throughout the world, with traditional foods, sometimes including lutefisk. In the United States and Canada, the local lodges of the Sons of Norway often play a central part in organizing the festivities. One major celebration occurs in Petersburg, Alaska also known as "Little Norway". The town is a Norwegian settlement and strongly retains its roots. The festival occurs the weekend closest to May 17 and includes a parade, Leikarring dancers, herring toss, Norwegian pastries such as lefse and even a pack of Vikings and Valkyries.

Another major Syttende Mai celebration occurs in Stoughton, Wisconsin, which is the 2nd largest in the world, and the 1st largest in the U.S. Festivities include canoe racing, two parades, an art fair, a 20-mile run that starts in Madison, Wisconsin, and a great deal of bratwurst consumption. The festival features the Stoughton High School Norwegian Dancers, a group that tours the country showcasing traditional ethnic dances of Scandinavia.[2]

Smaller Syttende Mai celebrations are held in Norwegian-heritage communities throughout western Wisconsin, Minnesota, and elsewhere in the Midwestern United States.[3] Members of Norway's Parliament Storting travel to Chicago to attend a three-day celebration consisting of a concert, banquet and parade hosted by the Norwegian National League.[4] Spring Grove, Minnesota also hosts a 3 day festival on the weekend nearest to Syttende Mai, while nearby Decorah, Iowa, the home of Nordic Fest and the Vesterheim Norwegian-American Museum, also hosts a parade.

Other large celebrations are held in the Ballard, Seattle, Washington neighborhood,[5] Poulsbo, Washington,[6] and Bay Ridge, Brooklyn. Epcot's Norwegian Pavilion in Florida, celebrates Constitution Day with numerous flags around the pavilion, as well as parades around the World Showcase Lagoon.

The Norwegian community in London holds a May 17 celebration each year in Southwark Park. The celebration is attended by a large number of Norwegians abroad, and includes a small parade, a traditional mass in the church, and the selling of traditional Norwegian foods such as Solo and makrell i tomat, and a lot of Norwegian flags for Norwegians who have left theirs at home. The occasional Russ has also attended the parade.

In Orkney, Scotland, 17. May is celebrated by the Orkney Norway Friendship Association in recognition of the islands' strong historic links with Norway.[7]

Stockholm, Sweden, has a big celebration with a parade starting at Engelbrektsplan and ending at Skansen, in which more than 10,000 participate every year. The event includes Stockholm's only dedicated 17. May marching band, Det Norske Korps.[8]

It is also common for Norwegians living abroad to gather and celebrate. In some countries, typically where the population of Norwegian expatriates is small, the Norwegian embassy or the diplomats' spouses arrange the event.

The poet Henrik Wergeland is credited with making Syttande/Syttende mai a celebratory day for the children rather than a day of patriotic pride. Actually, the day demonstrates that the children, i.e. the country's future, are the patriotic pride, if we follow Wergeland's thought. Flags and music dominate the day, and there are few military parades. To commemorate his contribution, the russ in Oslo place an oversized hat on his statue near the Norwegian parliament; the Jewish community place a wreath on his grave in the morning as a tribute to his efforts on their behalf.

The Royal Guard performs on the main street of the capital city, Oslo. During the parade, the Guard display their drill and musical skills. The marching band of the Royal Guard also attend the children's parade in central Oslo together with the schools' own marching bands, their black uniforms and impeccable drill being a very popular part of the Oslo parade.

The former Norwegian president of parliament Jo Benkow noted that the day has increasingly become a celebration of Norway's growing ethnic diversity.

Several factors have probably contributed to the inclusive nature of the celebration:

One can add that the day should be regarded as an expression of thankfulness, on behalf of the old values freedom, equality and brotherhood, the ideological basis for the constitution, and also on behalf of the circumstances that led up to the constitution. The aspect of "thanksgiving" in the national celebrations of Norway is easily forgotten in the long span of years from 1814.