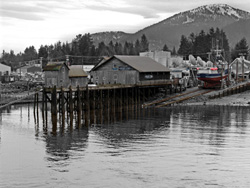 image_caption = A picture of a local shipwright.
imagesize = 250px

Petersburg is a city in Wrangell-Petersburg Census Area, , in the . According to 2005 Census Bureau estimates, the population of the city is 3,010.

The north end of was a summer fish camp utilized by Kake s from . Remnants of fish traps and some petroglyphs have been carbon-dated back some 2,000 years. Alaskan Natives began living year-round at the site, including Chief John Lot. Petersburg was named after Peter Buschmann, a Norwegian immigrant who arrived in the late 1890s and homesteaded on the north end of the island. He built a cannery (thanks to the plentiful number of s from the nearby which would provide a source for cooling fish), a sawmill, and a dock between 1890 and 1900. His family's homesteads grew into Petersburg which, by 1910 was incorporated and was populated largely by people of n origin thus giving Petersburg the nickname "Little Norway". () is celebrated annually in Petersburg on the third weekend in May. The cannery, along with three others have operated continuously since their completion. Petersburg is one of Alaska's major fishing communities.

The island is largely covered by low mountains, while the lowlands are mainly comprised of , a type of soil made up of plants in various states of decomposition.

There were 1,240 households out of which 38.4% had children under the age of 18 living with them, 54.2% were married couples living together, 9.3% had a female householder with no husband present, and 31.5% were non-families. 25.5% of all households were made up of individuals and 6.6% had someone living alone who was 65 years of age or older. The average household size was 2.56 and the average family size was 3.11.

Since it is located on an island, Petersburg can only be accessed by air or sea.

Petersburg receives service from two separate ferry services: the and the .

For the Alaska Marine Highway, Petersburg is a stop on its route that sees near-daily service both southbound and northbound to other Southeast Alaskan communities, and Canada. [ cite web
title = State of Alaska ferries
publisher =
url = http://WWW.DoT.State.AK.US/amhs/
format = HTML ]

Small cruise-ships (up to 250 passengers) and private yachts visit from May thru September.

The jet carrier serves Petersburg with both cargo and passenger service from the from Wrangell and Juneau daily, with service ultimately reaching Anchorage and Seattle. Bush carrier also offers service to Petersburg from Kake and ultimately Juneau (via Kake). Three charter air companies are available for regional flights.

*Petersburg is 12th most lucrative fisheries port in the United States by volume according to the . In , 103 million pounds of fish and shellfish passed through Petersburg.
*Petersburg is served by a weekly newspaper, the "".
*Petersburg usually serves as the jumping off point for the attempted ascents of , a very advanced peak located in the .
*Petersburg celebrates in a celebration called "Mayfest" locally on the third weekend in May.
*It's home to the Petersburg Marine Mammal Center [http://www.psgmmc.org/] . "Much is known about whales and other marine mammals; yet there is more to be learned. It exists to teach others that which is known, and to learn from and support the research into new discoveries."