Norwegian culture is closely linked to the country's history and geography. The unique Norwegian farm culture, sustained to this day, has resulted not only from scarce resources and a harsh climate but also from ancient property laws. In the 18th century, it brought about a strong romantic nationalistic movement, which is still visible in the Norwegian language and media. In the 19th century, Norwegian culture blossomed as efforts continued to achieve an independent identity in the areas of literature, art and music. This continues today in the performing arts and as a result of government support for exhibitions, cultural projects and artwork.[1]

The greatest sources of influence on Norwegian culture have been Denmark followed by Sweden. Others include the Lutheran church and Germany during the Middle Ages, France during the 18th century, Germany again during the 19th century and the English-speaking world after World War II. Norway today enjoys a strongly adapted western culture. Over the past 30 years, Norway has changed from an ethnically homogeneous society to a culturally diverse nation with large immigrant communities, especially in Oslo where a quarter of the citizens are immigrants.[2]

Not until fairly recently has the Norwegian cinema received international recognition but as early as 1959, Arne Skouen's Nine Lives was in fact nominated for an Oscar. Flåklypa Grand Prix (English: Pinchcliffe Grand Prix), an animated feature film directed by Ivo Caprino and released in 1975, is based on characters from Norwegian cartoonist Kjell Aukrust. It is the most widely-seen Norwegian film of all time.

Since the 1990s, the film industry has thrived with up to 20 feature films each year. Particular successes were Kristin Lavransdatter, The Telegraphist and Gurin with the Foxtail. Knut Erik Jensen was among the more successful new directors together with Erik Skjoldbjaerg remembered for Insomnia.[4]Norwegian artist and filmmaker Ole Mads Sirks Vevle received the critics award at the Cannes international film festival in 2003 for his shortfilm 'Love is the Law'[5]

Since the turn of the 21st century, there have been a number of successful Norwegian films.[6] These include:

Along with the classical music of romantic composer Edvard Grieg and the modern music of Arne Nordheim, Norwegian black metal has become something of an export article in recent years.

Norway's classical performers include Leif Ove Andsnes, one of the world's more famous pianists, and Truls Mørk, an outstanding cellist.

Several Norwegian authors have been awarded the Nobel Prize in Literature, namely Bjørnstjerne Bjørnson in 1903, Knut Hamsun in 1920 and Sigrid Undset in 1928 for Kristin Lavransdatter. Though he was not awarded a Nobel Prize for his plays, as the first of these were awarded after he published his last play in 1899, playwright Henrik Ibsen is probably the most famous figure in Norwegian literature. Ibsen wrote plays such as Peer Gynt, A Doll's House and The Lady from the Sea. Other famous Norwegian writers from the realistic era include Jonas Lie and Alexander Kielland who are along with Bjørnstjerne Bjørnson and Henrik Ibsen regarded as the "four greats" of Norwegian literature.

Also of importance to the Norwegian literary culture is the Norse literature, and in particular the works of Snorre Sturlason, as well as the more recent folk tales, collected by Asbjørnsen and Moe in the 19th century.

Norwegian literature attained international acclaim in the 1990s with Jostein Gaarder's novel Sophie's world (Sofies verden) which was translated into 40 languages. Other noteworthy writers with an international profile include Erik Fosnes Hansen (Psalm at Journey's End) and Åsne Seierstad whose controversial work, The Bookseller of Kabul, was particularly successful in 2003.[10]

Norway has always had a tradition of building in wood. Indeed, many of today's most interesting new buildings are made of wood, reflecting the strong appeal that this material continues to hold for Norwegian designers and builders.[11]

Norway's conversion to Christianity some 1,000 years ago led to the introduction of stonework architecture, beginning with the construction of Nidaros Cathedral in Trondheim.

In the early Middle Ages, stave churches were constructed throughout Norway. Many of them remain to this day and represent Norway’s most important contribution to architectural history. A fine example is The Stave Church at Urnes which is now on UNESCO’s World Heritage List. Another notable example of wooden architecture is the Bryggen Wharf in Bergen, consisting of a row of narrow wooden structures along the quayside.

In the 17th century, under the Danish monarchy, cities such as Kongsberg with its Baroque church and Røros with its wooden buildings were established.

After Norway’s union with Denmark was dissolved in 1814, Oslo became the capital. Architect Christian H. Grosch designed the oldest parts of the University of Oslo, the Oslo Stock Exchange, and many other buildings and churches.

At the beginning of the 20th century, the city of Ålesund was rebuilt in the Art Nouveau style. The 1930s, when functionalism dominated, became a strong period for Norwegian architecture, but it is only in recent decades that Norwegian architects have truly achieved international renown. One of the most striking modern buildings in Norway is the Sami Parliament in Kárášjohka designed by Stein Halvorson and Christian Sundby. Its debating chamber is an abstract timber version of a Lavvo, the traditional tent used by the nomadic Sami people.[12] 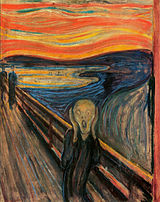 For an extended period, the Norwegian art scene was dominated by artwork from Germany and Holland as well as by the influence of Copenhagen. It was in the 19th century that a truly Norwegian era began, first with portraits, later with even more impressive landscapes. Johan Christian Dahl (1788–1857), originally from the Dresden school, eventually returned to paint the landscapes of western Norway, defining Norwegian painting for the first time."[13]

Norway's new-found independence from Denmark encouraged painters to develop their Norwegian identity, especially with landscape painting by artists such as Kitty Kielland, 1843–1914, an early female painter who studied under Gude; Harriet Backer, 1845–1932, another pioneer among female artists, influenced by impressionism. Frits Thaulow, 1847–1906, an impressionist, was influenced by the art scene in Paris as was Christian Krohg, 1852–1925, a realist painter, famous for his paintings of prostitutes.[14]

Of particular note is Edvard Munch, (1863–1944), a symbolist/expressionist painter who became world famous for The Scream which is said to represent the anxiety of modern man.

Other artists of note include Harald Sohlberg, (1869–1935), a neo-romantic painter remembered for his paintings of Røros and Odd Nerdrum, (b. 1944), a figurative painter who maintains his work is not art but kitch.

The oldest Norwegian photograph is from Hans Thøger Winther dating back to 1840. Marcus Selmer is considered to be the first dedicated landscape photographer but Knud Knudsen and the Swede Axel Lindahl are remembered for their extensive travels aimed at capturing landscapes .

From the late 19th century until World War I, photographers set up shop throughout Norway. A remarkably large number of women were among them. In 1901, Anders Beer Wilse returned from Seattle and established one of the most famous photographer careers in Norway. Although dominated primarily by German influences in the late 19th century, pictorialism caught on in Norway as it did elsewhere in the world and was promoted by the Oslo camera club, founded in 1921. The pictorialists include Robert Collett, Aage Remfeldt, Thomas Blehr, and Waldemar Eide.

Around World War I, portrait photography in Norway became more of an expressive art as a result of the work of Waldemar Eide, Dimitri Koloboff, Gunnar Theodor Sjøwall, Aage Remfeldt, Hans Johnsrud and Anders Beer Wilse.

In 1971, the first photographic work (by Kåre Kivijärvi) was accepted at the prestigious Autumn Exhibition in Oslo, marking the widespread acceptance of photography as an art form.[15]

Norwegians celebrate their national day on May 17, dedicated to the Constitution of Norway. Many people wear bunad (traditional costumes) and most participate in or watch the Norwegian Constitution Day parade that day, consisting mostly of children, through the cities and towns. The national romanticist author Henrik Wergeland was the founder of the 17 May parade.

Common Christian holidays are also celebrated, the most important being Christmas (called Jul in Norway after the pagan and early Viking winter solstice) and Easter (Påske).

Jonsok (St. John's Passing), or St. Hans (St. John's Day), i.e. 24 June, is also a commonly revered holiday. It marks midsummer and the beginning of summer vacation, and is often celebrated by lighting bonfires the evening before. In Northern areas of Norway, this day has 24 hours of light, while southern areas have only 17.5 hours.

Physical culture is also important in one of the most prosperous nations in the world. In terms of the opportunities for enjoying leisure, few countries compare with Norway. With great forests and wide mountain plateaus for winter pleasure and extensive coastal areas and rivers for summer recreation, Norway provides a natural environment which encourages outdoor sports and to a large degree hiking. Many Norwegians own at least one pair of skis, and the Norwegian Mountain Touring Association stands strong.

Norway has a wide variety of cultural institutions from the National Museum of Art, Architecture and Design and the National Library in Oslo to the smaller galleries and libraries across the country. In recent years, the Norwegian Archive, Library and Museum Authority has done much to encourage synergies between the cultural institutions, particularly at the local level, which has had an impact on schools, local history and community interests. Its website, Culturenet.no, presents information about cultural institutions, artists, exhibitions and events.[16]