Dragon is one of the two official magazines for source material for the Dungeons & Dragons role-playing game and associated products, the other being Dungeon. TSR, Inc. originally launched the monthly printed magazine in 1976 to succeed the company's earlier publication, The Strategic Review. The final printed issue was #359 in September 2007.[1][2] Shortly after the last print issue shipped in mid-August, 2007, Wizards of the Coast (part of Hasbro, Inc.), the publication's current intellectual property rightsholder, re-launched Dragon as an online magazine, continuing on the numbering of the print edition. (Issue #395 was published in January 2011.[3]) 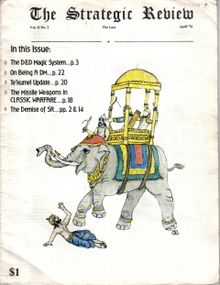 The last issue of The Strategic Review 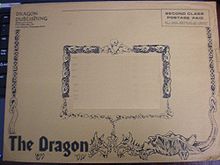 In the early 1980s, The Dragon was mailed in an envelope like this one

In 1975, TSR, Inc. began publishing The Strategic Review. At the time, roleplaying games were still seen as a sub-genre of the wargaming industry, and the magazine was designed not only to support Dungeons & Dragons and TSR's other games, but also to cover wargaming in general. In short order, however, the popularity and growth of Dungeons & Dragons made it clear that the game had not only separated itself from its wargaming origins, but had launched an entirely new industry unto itself.

TSR cancelled The Strategic Review after only seven issues the following year, and replaced it with two magazines, Little Wars, which covered miniature wargaming, and The Dragon, which covered role playing games. After 13 issues, Little Wars ceased publication and its content was folded into The Dragon (starting with issue 24).[4] The Dragon later changed its name to Dragon Magazine and finally simply Dragon.

The Dragon debuted in June 1976. TSR co-founder Gary Gygax commented years later: "When I decided that The Strategic Review was not the right vehicle, hired Tim Kask as a magazine editor for Tactical Studies Rules, and named the new publication he was to produce The Dragon, I thought we would eventually have a great periodical to serve gaming enthusiasts worldwide... At no time did I ever contemplate so great a success or so long a lifespan."[5]

Dragon was the launching point for a number of rules, spells, monsters, magic items, and other ideas that were incorporated into later official products of the Dungeons & Dragons game. A prime example is the Forgotten Realms campaign setting, which first became known through a series of Dragon articles in the 1980s by its creator Ed Greenwood. It subsequently went on to become one of the primary campaign 'worlds' for official Dungeons and Dragons products, starting in 1987.

In 1999 a compilation of the first 250 issues was released in PDF format with a special viewer including an article and keyword search in CD-ROM format. Also included were the 7 issues of The Strategic Review. This compilation is known as the software title Dragon Magazine Archive. Because of a conflict regarding the reprint rights for the Knights of the Dinner Table comic strips printed in Dragon for many years, the Dragon Magazine Archive is out of print and very hard to find.

In 2002, Paizo Publishing acquired the rights to publish both Dragon and Dungeon under license from Wizards of the Coast. It tied Dragon more closely to Dungeon by including articles supporting and promoting its major multi-issue adventures such as the Age of Worms and Savage Tide. Class Acts, monthly one or two-page articles offering ideas for developing specific character classes, were also introduced by Paizo.

On April 18, 2007, Wizards of the Coast announced that it would not be renewing Paizo's licenses for Dragon and Dungeon. Scott Rouse, Senior Brand Manager of Dungeons & Dragons at Wizards of the Coast stated, "Today the internet is where people go to get this kind of information. By moving to an online model we are using a delivery system that broadens our reach to fans around the world."[1] Paizo published the last print editions of Dragon and Dungeon magazines for September 2007.

In August 2007, Wizards of the Coast announced plans for the 4th edition of the Dungeons & Dragons game. Part of this announcement was that D&D Insider subscriber content would include the new, online versions of both Dungeon and Dragon magazines along with tools for building campaigns, managing character sheets and other features.[6] In its online form, Dragon continues to publish articles aimed at Dungeons & Dragons players, with rules data from these articles feeding the D&D Character Builder and other online tools.

Although Dragon provided coverage of fantasy and roleplaying games in general, it became primarily a house organ for role-playing games produced by TSR (or more recently Wizards of the Coast), with a particular focus on D&D. Its coverage of games created by other companies is often peripheral.

Most of the magazine's articles provided supplementary material for D&D including new prestige classes, races, monsters and many other subjects that could be used to enhance a Dungeons & Dragons game. A popular long-running column Sage Advice offered official answers to Dungeons & Dragons questions submitted by players. Other articles provided tips and suggestions for both players and Dungeon Masters (DMs). It sometimes discussed meta-gaming issues, such as getting along with fellow players. At the end of its print run, the magazine also featured four comics; Nodwick, Dork Tower, Zogonia and a specialized version of the webcomic The Order of the Stick. Previous popular gamer-oriented comic strips include Knights of the Dinner Table, Fineous Fingers, What's New with Phil & Dixie, Wormy, Yamara and SnarfQuest.

Many of the gaming world's most famous writers, game designers and artists have published work in the magazine. Through most of its run the magazine frequently published fantasy fiction, either short stories or novel excerpts. After the 1990s, the appearance of fiction stories became relatively rare. One late example was issue #305's featured excerpt from George R.R. Martin's later Hugo-nominated novel A Feast for Crows. It also featured book reviews of fantasy and science fiction novels, and occasionally of films of particular interest (such as the TV movie of Mazes and Monsters).

A regular feature of Dragon for many years was its "Ecology of ..." articles as sometimes discussed by the fictional sage Elminster, in which a particular D&D monster received an in-depth review, explaining how it found food, reproduced, and so forth. Under Paizo's tenure such ecology articles became heavier in "crunch" (game mechanics) as opposed to "fluff" (narrative and description) than previously.[7]

In the early 1980s, almost every issue of Dragon would contain a role playing adventure, a simple board game, or some kind of special game supplement (such as a cardboard cut-out castle). For instance, Tom Wham's Snit's Revenge, The Awful Green Things From Outer Space and File 13 all started as supplements within The Dragon. These bonus features become infrequent after the 1986 launch of Dungeon magazine, which published several new Dungeons & Dragons adventures in each issue.

During the 1980s, after TSR had purchased Simulations Publications Inc., the magazine had a subsection called Ares Magazine, based on SPI's magazine of that name, specializing in science fiction and superhero role playing games, with pages marked by a gray border. The content included write-ups for various characters of the Marvel Universe for TSR's Marvel Super-Heroes. 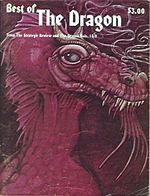