Mazes and Monsters is a 1982 made-for-TV movie directed by Steven Hilliard Stern about a group of college students and their interest in a fictitious role-playing game (RPG) of the same name. The movie starred a 26-year-old Tom Hanks in his first major leading role.[1]

The film was adapted from a novel of the same name by Rona Jaffe. Jaffe had based her 1981 novel on inaccurate newspaper stories about the disappearance of James Dallas Egbert III from Michigan State University in 1979. Media accounts differed substantially from Egbert's actual story. William Dear, the private investigator on the case, explained actual events and the reasons behind the media myth in his 1984 book The Dungeon Master. Jaffe wrote her novel at a breakneck pace in a matter of days because of a fear that another author might also be fictionalizing the Egbert investigation.

The working title for the film was Dungeons & Dragons, but CBS dropped it in favor of the novel's title, presumably to avoid lawsuits over use of the trademarked name.[2] The film premiered on CBS in 1982. It stars Tom Hanks, Wendy Crewson, David Wallace and Chris Makepeace. The movie is currently available on VHS tape and DVD.

Mazes and Monsters came out in the heyday of the RPG Dungeons & Dragons (the novel's title is a thinly veiled reference to the game) and was seen by some as a warning to parents about the dangers of RPGs. It came out at a time when Dungeons & Dragons (D&D) was being attacked by groups who alleged that it promoted Satanism and other forms of occult activities.

Like the book on which it is based, the film treats the playing of roleplaying games as indicative of deep neurotic needs. At least one protagonist is (or at least appears to be) suffering from schizophrenia (or some analogous condition) and in the end, the attainment of adulthood by other players is accompanied by the abandonment of role-playing games.[3] 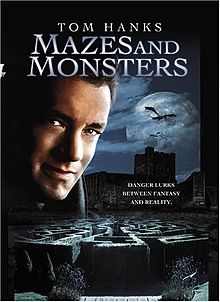 Front cover of DVD release. Note that the hedge maze, castle, and dragon-like creature did not appear in the actual movie. Also, the photo of Hanks is far more recent than 1982.

The movie opens with a scene that is repeated later in the film in which a reporter meets with police searching a cavern. He is told a Mazes and Monsters game got out of hand.

Robbie Wheeling (Hanks) starts college at the fictional Grant University and soon develops a group of friends, all of whom have their own personal problems and issues. JayJay feels marginalized by his mother who constantly redecorates his room, Kate has had a series of failed relationships, Daniel's parents reject his dream of becoming a video game designer, and Robbie's alcoholic mother and strict father fight constantly and he is still tormented by the mysterious disappearance of his brother Hall. They are fans of a game called Mazes and Monsters, a fantasy roleplaying game that had previously caused Robbie to flunk out of his last school when he became too obsessed with it. Though he is reluctant, the other three students convince him to start playing again with them.

Through the course of playing the game, Robbie and Kate begin a serious relationship, in which he confides in her that he still has nightmares about his missing brother. Eventually, JayJay, upset by feeling left out by his friends, decides to commit suicide in a local cavern. In the process of planning it out, he changes his mind and decides the cavern would be better suited to a new Mazes and Monsters campaign. He dramatically kills off his character to force them to start a new campaign, in which he describes they will be living out their fantasy.

During the actual spelunking, Robbie experiences a psychotic episode, where he hallucinates that he has slain a monster, called a Gorvil. From this point forward, Robbie believes he is actually his character, the cleric Pardeux. This leads him to break off his relationship with Kate (to maintain celibacy), and to start drawing maps that will lead him to a sacred location he has seen in his dreams called the Great Hall. In his dream, the Great Hall tells him to go to the Two Towers, which is in fact the World Trade Center, and he believes that by jumping off of them and casting a spell, he will finally enter the Great Hall. His friends have reported him to the police while concealing their trip into the caverns, and eventually deduce his location in New York and stop him from jumping.

The movie ends with the friends visiting Robbie at his parents' estate. Though he is now in regular counseling, it is implied that Robbie will live out the rest of his life trapped in his imaginary world believing that he is still Pardeux, that his friends are really their characters, and that he is living at an inn (actually his parents' home) and paying for his boarding with a magic coin, which "magically" reappears on his bedside table each morning. The other three friends engage him one last time in a "game" of Mazes and Monsters, letting Robbie dictate the events to them.