Nodwick is a comic strip created by Aaron Williams, based around the conventions of fantasy role-playing games, in particular Dungeons & Dragons (D&D). It debuted in Dragon magazine issue #246 (April 1998), first with short strips, and later receiving a second strip in Dungeon magazine, making fun of one of the adventures published in each issue. In Dragon #270 (April 2000), Nodwick was expanded to a two-page spread and replaced Knights of the Dinner Table as a full-page comic that served as a parody of D&D adventuring. It later became a single page strip, related to the issue's theme; later, the strip was removed from Dungeon, but still appeared in Dragon, now unrelated to the main theme of the issue, until Dragon ceased print publication late in 2007.

The titular character, Nodwick, is a henchman (as opposed to a hireling) in the employ of a typical Dungeons & Dragons-style adventuring party. Nodwick is published in Dragon Magazine and on Nodwick.com, along with a "sibling" comic, Full Frontal Nerdity. Nodwick and the adventurers he works with were given statistics for 2nd edition Dungeons & Dragons rules as part of the Giants in the Earth article in Dragon #270. A Nodwick card game is also available.

A bi-monthly comic book was published by the author, which ran for 36 issues before its cancellation. The strip has since become a back-up strip in Nodwick's more popular sister title PS238, although collections of the comic book are available as trade paperbacks.[1]

A "reinvented" version of Nodwick and his adventuring group have also appeared in a City of Heroes based comic strip as the superhero team "Q-4orce."

A short henchman, Nodwick has served the adventurers for many years. As the artist's style evolved, Nodwick grew shorter and his nose grew larger; this was actually commented upon in the comics themselves, with Artax trying to understand how it happened and Nodwick suggesting his nose grew to create balance for the oft-ridiculous weights he is forced to carry (generally orders of magnitude greater than his own weight). As most of the other henchmen in the strip look very similar to Nodwick, this seems to be a relatively common phenomenon.

Artax and Yeagar frequently use Nodwick to set off traps, or to distract or bait monsters. Nodwick has died numerous times, but each time Piffany manages to revive him with her duct tape of healing, usually wrapping him from head to toe to put him back together (On one occasion, Nodwick was reduced to a pile of ashes, so the group poured his ashes into a "Hench Mold" with the words "Just add water" written on it; about the only time she hasn't used the duct tape); so Yeagar and Artax usually don't worry about tossing him into gruesome traps, feeding him to dragons, etc., if it will advance their quests. At least one comic has mentioned that he has also been cloned several dozen times by Artax when Piffany was unavailable. Nodwick isn't as knowledgeable as Artax or as wise as Piffany, but he possesses the most common sense in the group, and is the most likely to protest their hare-brained schemes..

Over the course of his travails, Nodwick has developed a dry sense of humor and a jaded wit, and lost whatever fear of death he ever held. According to the 2nd edition character sheet for Nodwick, if he ever encounters a deity, there is a 20% chance that the deity in question recognizes him from his all-too frequent trips to the hereafter. Still, he prefers to avoid dying if he can. (The trade paperbacks include a "Rest Index Peace" at the end of each volume, listing all the ways Nodwick has died up to that volume, this Index doesn't include Nodwick's deaths from Dragon and Dungeon Magazines, nor from the online comic)..

In Dragon #270's Giants in the Earth article, Nodwick is stated as being a level 21 Henchman, with eighteen ranks in each of the Nonweapon Proficiences Schlepping, Toting, Hauling, and Lifting with Knees. He also counts as having 15 ranks in the Religion Nonweapon Proficiency, due to his frequent deaths. His Nonweapon Proficiences are what allows Nodwick to carry such ridiculously large amounts of junk, and only apply to things designated "loot". In all other situations, Nodwick's Strength statistic is given as a mere eight. In this article, Nodwick is stated as being of Lawful Good alignment, which is why he attempts to merely find a loophole in his contract in order to escape rather than simply absconding while unattended or even murdering his employers in their sleep. It is noted that there is a base 5% chance that Nodwick may be carrying any item from the Player's Handbook, with this chance increasing by +2% for every cubic foot of junk Nodwick is hauling.

Buff fighter with muscles between his ears. It is often Yeagar who drags the party off on life-threatening looting runs. Yeagar's exploits frequently involve consuming large quantities of "Skull-whomper ale" and making a fool of himself and his companions. Yeager is portrayed as a proficient warrior who is nevertheless overly eager and impetuous, lacking in brainpower, and all too willing to use Nodwick as monster-bait; in one notable episode, his companions realized that Yeagar had been replaced with a doppleganger when he opted to throw a rock at a switch across a lava bed instead of throwing Nodwick at it. Noted for his chainmail body stocking and very large spiked shoulder pauldrons..

In Dragon #270's Giants in the Earth article, Yeager is described as a level 8 Chaotic Good Fighter with the special defence of a 50% resistance to attempts at reasoning. He has 12 skill ranks in Scheme, 15 in Simple Solutions For Complex Problems, and 11 in Running. Pioneer of the various abuses of henchman, he treats his Intelligence as being 18 when attempting to figure out reasons to use a henchman for something like stopping a portcullis from closing. Yeager's armor is described as being +3 chainmail, and his sword is a +1 longsword- at least, in his hands. Yeager's sword is actually a Reaper of Evil +5, +10 vs. Evil Creatures. As well as its potent magical effects, it is a sentient weapon with an Intelligence and an Ego of 18 that provides its wielder with the ability to turn undead three times per day as though they were a level 15 cleric, the power to cure disease with a touch and the ability to directly contact their patron god once per year. However, the horrific experiences it suffered shortly after coming into Yeager's possession (being used to kill a skunk, scrape dragon dung off Yeager's boots and cut a path through a field of bile weeds, then fatally impaling a saintly monk after trying to leap from Yeager's possession) have left it mentally scarred and locked in a catatonic state. The only method able to cure it will be removal from Yeagar's possession and several years of therapy.

Tall, skinny wizard with a pointy green hat and an extremely long moustache. Long on intelligence, short on wisdom, and Yeagar's best friend. Artax is ostensibly the leader of the outfit, directing their efforts, but just as often Yeagar and Piffany just do as they please. Artax is not as impetuous as Yeagar and more inclined to question the advisability of his friend's scheme, but usually caves in and goes along with whatever Yeagar has in mind. Like Yeagar, he frequently uses Nodwick to set off traps, lure monsters out of their lairs, et cetera. When at home, Artax frequently uses Nodwick as a laboratory assistant (or guinea pig).

In Dragon #270's Giants in the Earth article, Artax is stated as having come from a long line of magicians. A few of his ancestors became quite famous and/or powerful, but the majority of them were lucky enough to breed before killing themselves in some spectacular magical accident. A level 7 Generalist Wizard of Neutral Good alignment, Artax has Nonweapon Proficiency ranks in Spellcraft (16), Henchcraft (18), Ancient Languages (18), Reading/Writing (19) and Forgery (15). Artax's elongated mustache is said to be infested with so many food particles that it can be ingested with all the nutritional value of a single iron ration, while his pointy hat has the powers of a +4 Ring of Protection. He is noted to have a special defence; a 30% resistance to pleas of mercy.

According to his background in this article, Artax originally adventured with a different group of adventurers- consummate professionals who were truly interested in doing good. This put them at odds with Artax, who is self-obsessed and power hungry. Yeager and Artax met when Artax's previous party was interviewing potential replacements for a slain member, a footman implicitly murdered by Artax (he was struck by lightning, while only Artax was around, in the middle of a sunny day); Artax's previous party rejected Yeagar, and that made Artax decide he was the perfect partner.

Small, bespectacled cleric of good. Unfailingly honest, Piffany is also unwilling to seriously harm any living thing; the closest she comes is whacking things over the head with her staff while screaming "NAUGHTY! NAUGHTY! NAUGHTY!" She spends a lot of time putting Nodwick back together with her "duct tape of healing" and is probably the closest thing he has to a friend among the party. Although she possesses a great deal of wisdom and is the purest soul in the universe, Piffany isn't quite the brightest bulb in the box and is commonly manipulated by her companions.

Piffany is the only member of the party who treats Nodwick with any kind of dignity, but Artax and Yeagar often take advantage of her natural gullibility to use Nodwick to trigger traps "for the greater good." When she isn't patching Nodwick together or scolding Yeagar and Artax for their general naughtiness, Piffany spends her time proselytizing in the name of niceness and baking the universe's best cookies - the recipe of which was used to settle a dispute among the gods once. Despite their differences with the young cleric, Artax and Yeagar are actually quite protective of Piffany and would never let any harm come to her.

In Dragon #270's Giants in the Earth article, Piffany is described as being a Lawful Good Cleric of 8th level. Her outfit functions as +3 leather armor and her staff is described as being a Staff of Harmony. This makes it an enchanted item that can be wielded in combat as a +3 mace, with the added feature that it warns the wielder of any evil alignment creature of at least five Hit Dice that has come within 30 feet of them. It can be used three times each day to cast the Command spell, and can also be 'charged' with up to three clerical spells for cases of emergency. 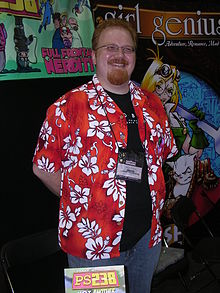 There's also an evil group who closely resembles the party, however, this group doesn't employ a henchman, except for their first appearance, when they tried to loot the Henchmen Cemetery.[10]

The group was defeated by the party in two separate occasions before they turned to worshipping Baphuma'al, and their power has been raised by the evil god.

The party has also run into various characters from classic D&D adventures and novels, such as Raistlin Majere from Dragonlance, Elminster from the Forgotten Realms, and Count Strahd von Zarovich from Ravenloft, as well as the game's creators, Gary Gygax and Dave Arneson. They've also encountered characters who appear to be from other sources as well (a pageful of cameos including Xena and Harry Potter in one issue, Death from The Sandman appearing in another, Spider-Man being chased by an amorous Lolth in a comic strip in Dragon Magazine, etc.).

References to the comic