These aircraft were soon outdated and the Dutch government ordered several fighter/reconnaissance Nieuport and Caudron aircraft to replace them.

The Netherlands maintained a neutral position during World War I and the Army Aviation Group did not take part in any action, instead developing the force's capabilities.

Pilot training was opened for ranks below officer, and technical, aerial photography, meteorological and navigation flights were established.

New airfields were established at Arnhem, Gilze-Rijen air base, Venlo and Vlissingen.

After the end of World War I the Dutch government cut the defence budget and the Army Aviation Group was almost dissolved. As political tensions in Europe increased during the late 1930s the government tried to rebuild the armed forces again in 1938 but there were many problems, not least the shortage of pilot instructors, navigators and pilots to fly the new multiple engine aircraft. Lack of standardisation and resulting maintenance issues added to the complexity of the rebuilding task.

In August 1939, the Netherlands government mobilised its armed forces, but due to limited budgets the Army Aviation Brigade operated only 176 combat aircraft of the following types:

Fokker D.XXI at the Air Force Museum in Soesterberg.

In May 1940, Germany invaded the Netherlands. Within five days the Dutch Army Aviation Brigade was taken out by the German Luftwaffe. All of the Brigade's bombers, along with 30 D.XXI and 17 G.I fighters were shot down; two D.XXI and eight G.I were destroyed on the ground. Two G.I were captured by German forces, one of which was later flown to England by a Fokker pilot. The Douglas bombers were used as fighters because no suitable bombs were available; these aircraft were poorly suited for this role and eight were shot down and three destroyed on the ground in the first hours of the conflict.

In spite of their numerical inferiority, the Dutch armed forces did enjoy success against the Luftwaffe, having 350 Luftwaffe aircraft destroyed, although many of these were lost to anti-aircraft fire and crashes at improvised landing fields in the Netherlands rather than due to action by Dutch fighters. The cost was high - almost 95% of the Dutch pilots were lost. In recognition of their actions Queen Wilhelmina granted the highest Dutch military decoration, the Militaire Willemsorde (MWO), to the Army Aviation Brigade collectively.

Some aircrews escaped to England and on June 1, 1940, 320 Squadron and 321 Squadron were established there under RAF operational command. Due to a shortage of personnel, 321 Squadron was absorbed by 320 Sqn in January 1941. Although their personnel were predominantly from the Navy Air Service, Army Aviation aircrew also served with 320 Sqn until the end of the war.

In 1941, the Royal Netherlands Military Flying School was re-established, in the United States at Jackson Field (also known as Hawkins Field), Jackson, Mississippi, operating lend-lease aircraft and training all military aircrew for the Netherlands.

In 1942, 18 (NEI) Squadron, a joint Dutch-Australian unit was established, in Canberra, equipped with B-25 Mitchell bombers. It saw action in the New Guinea campaign and over the Dutch East Indies. In 1943, 120 (NEI) Squadron was established. Equipped with Kittyhawk fighters, it flew many missions under Australian command, including the recapturing of Dutch New Guinea. 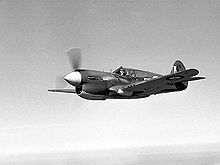 In June 1943, a Dutch fighter squadron was established in England. 322 (Dutch) Squadron, equipped with the Supermarine Spitfire, saw action as part of the RAF. 322 Sqn aircraft featured the British RAF roundels as well as the Dutch orange triangle. 322 Sqn was successfully deployed against incoming V-1 flying bombs. From mid-1944, during the invasion of Normandy, it executed ground attack missions over France and Belgium.

In July 1944, the Directorate of Netherlands Airpower was established in London.

In 1947, its Chief of Air Force Staff was appointed.

In 1951 several non-combat functions in the Army Aviation were opened to women.

On the 27th of March 1953 the Royal Netherlands Air Force officially became part of the Dutch armed forces.

The Air Defense Command, (Commando Lucht Verdediging, abbreviated CLV) consisting of a command unit, five radar stations and six fighter squadrons, had been established. Its radar equipment as well as its air defense fighters all came from obsolete RAF stocks. 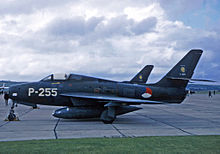 The Indonesian government claimed New Guinea following the end of the second world war. The Dutch government considered the area Dutch territory. Negotiations over the country were conducted for years, but tensions grew until Indonesia broke diplomatic relations with the Netherlands at the end of the 1950s.

In response, in 1958, the Netherlands deployed military reinforcements to New Guinea, including an Air Force detachment for the air defense of the island Biak as there was evidence that Indonesia was infiltrating the island in advance of a military operation.

The first Air Force contribution was the installation of two MkIV early warning radars on Biak and neighbouring Woendi island.

The political situation between the Netherlands and Indonesia continued to deteriorate and in 1960 the Dutch government deployed reinforcements. The operations were known by name as ’Plan Fidelio’. For the Dutch Air Force this meant the establishment of an Air Defense Command for New Guinea (Commando Luchtverdediging Nederlands Nieuw-Guinea - CLV NNG) consisting of :

In August 1962 Indonesia was ready to attack New Guinea. Despite reinforcements the Dutch defences would be insufficient to withstand the coming attack. Therefore, and because of international political pressure the Dutch government was forced to agree to the peaceful surrender of New Guinea. Dutch forces were withdrawn from the territory.

The establishment of 336 transport squadron is closely connected to New Guinea. Soon after activation this unit was deployed to New Guinea to take over air transport from the Dutch Navy. 336 Sqn deployed and took over three Navy Dakotas and three US supplied aircraft. 336 Sqn operated from Mokmer airstrip and transported more than 5,400 passengers between September 1961 and September 1962.

During the cold war era Dutch Air Force units played an important part in the West European defence against the opposing Warsaw Pact forces. The Dutch Air Force manned five fully operational self supporting Missile Groups in West Germany (1 and 2 MslGrp were equipped with NIKE batteries, while 3,4 and 5 MslGrp were equipped with Hawk). Dutch fighters and other weapon systems also took a full part in NATO alert, standby duties and exercises through the years. 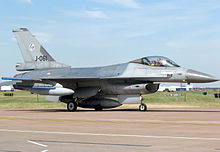 RNLAF F-16s participated in all operations over Yugoslavia from 1993 Deny Flight, including Deliberate Force in 1995 and ending with Operation Allied Force in 1999 from two bases in Italy. Initially from Villafranca AB in the north of Italy, later moving south to Amendola AB. During the operations over FRY RNLAF F-16s flew reconnaissance (306Sqn detachments from Volkel AB were in theatre throughout the operations), enforced the Bosnian no-fly zone, dropped bombs on Udbina AB (1994), successfully dropped an unguided bomb on a moving Serb tank during the fall of Srebrenica (1995), and took part in Deliberate Force later in the summer of 1995.

Between 1994 and 1997 Dutch GCI personnel, along with Canadian GCI controllers, provided many hundreds of hours of fighter control and surveillance as integrated members of USAF/ANG Air Control Squadrons. During the Kosovo crisis a RNLAF F-16AM (mid-life update) damaged [1] a Yugoslavian MiG-29 with an AMRAAM, but the force was more recognized for its high bombing accuracy. Allied Force was also the operational debut for the upgraded F-16AM. Besides the CAP mission, offensive bombing and photo reconnaissance missions were flown. KDC-10 tankers refuelled allied fighter over the Adriatic Sea, and C-130 Hercules transports flew daily sorties from Eindhoven AB to logistically support the operation. In total, RNLAF aircraft flew 1,194 sorties during operation Allied Force, which is about 7.5% of the total 37.000 sorties flown.

An F-16 of the RNLAF over Afghanistan

In October 2002 a tri-national detachment of 18 Dutch, Danish and Norwegian F-16 ground attack aircraft and one Dutch KDC-10 tanker deployed to Manas Air Base in Kyrgyzstan in support of ground forces in Afghanistan as part of Operation Enduring Freedom. The RNLAF returned to Manas AB in September 2004 with five F-16 and one KDC-10 in support of the presidential elections of Afghanistan. This time the aircraft flew under the NATO ISAF flag.

In February 2006 four Dutch F-16s were joined by four Royal Norwegian Air Force F-16s in a detachment known as the 1st Netherlands-Norwegian European Participating Forces Expeditionary Air Wing (1 NLD/NOR EEAW). This was a follow up of the participation with the Belgian Air Force.[2]

On August 31, 2006 a Royal Netherlands Air Force (Michael "Sofac" Donkervoort) pilot was killed when his plane crashed during a mission to support British ground troops in Helmand province.[3]

In 2009 710 and 711 Sqn were merged into one Air Operations Sqn (711Sqn). The status of the base was changed to NATO status as an airmobile NATO Deployable Air control centre, Recognised air picture production centre, Sensor fusion post DARS radar unit became operational on the base in the same year.

RNLAF Eurocopter Cougar (the military name for the civilian Super Puma) at RIAT 2010. 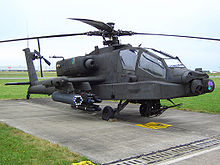 AH-64 Apache of the RNLAF

Designated as a military aviation site. Only fully operational when used for military helicopter exercises, otherwise staffed only by security personnel. 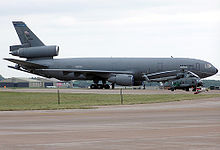 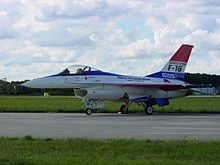 The Netherlands was the first country to sign up for the Production Sustainment and Follow On Development (PSFD) Phase of the F-35 Lightning II aircraft.[4]

Through the NATO Strategic Airlift Capability, the RNLAF has access to three C-17s.

Replacement for the F-16

The Netherlands Air Force wants to replace its F-16 fleet in the next decade. Candidates for the replacement were the Dassault Rafale, Lockheed Martin's F-16 Block 52/60, the Eurofighter Typhoon, the Saab Gripen and Lockheed Martins F-35. In 2002 The Netherlands signed a MOU (Memoradum Of Understanding) to co-develop the F-35 as a 'Tier 2' Partner. That deal is worth around 800 million US dollars, advanced by the Dutch government on behalf of Dutch industries: After the demise of Fokker Aircraft, the government wanted to retain whatever aerospace industry it could.

The F-35 seemed to be the best replacement for the F-16. But Saab is now offering their latest aircraft, the Saab Gripen NG (Next Generation), to The Netherlands at a much lower price (including maintenance for its entire lifespan). The Netherlands did compare the Saab Gripen NG and the F-35 in early 2009 and the F-35 came out on top. Many sources and signs indicate that the F-35 will be the next fighter of the Royal Netherlands Air Force.[citation needed]

In early 2008, a decision was put before Parliament to buy two test aircraft for Dutch pilots to train in the US. But instead, in April 2009 it was decided to buy just one test aircraft and defer the final decision as to what to buy to 2011, after the elections. The new government announced plans to acquire the second test aircraft in April 2011 in order to remain with the test program, but a next government and Parliament will review the whole process again while opposition to the F-35 is growing ever stronger. Reasons for this are ever rising costs, uncertainty about the exact cost of the aircraft, slips in the schedule of delivery and thus uncertainty about delivery dates. Also, Dutch industries have been complaining about their offsets from the USA.[13]