Soesterberg Air Base is a Base located in , 10km (7 s) eastnortheast of Utrecht. It was first established as an airfield in 1911, and in 1913 the Dutch Army bought the field and established the Army Aviation Division.

For almost 40 years, facilities at Soesterberg, named Camp New Amsterdam was a major front line airbase during the . The base is scheduled for closure at the end of 2008.

During , the Netherlands was a neutral country and flew border patrol missions from Soesterberg airfield. The Dutch confiscated all foreign aircraft landing inside the borders of their country during the war and added the operational ones to their inventory to be used for pilot training at Soesterberg.

At the beginning of , the Dutch again declared neutrality but the German force's blitzkrieg overran the country in 5 days and Soesterberg was occupied by the German on . A variety of German aircraft was stationed there during the war, flying anti-shipping missions along British convoy routes in the North Sea, bombing missions over England, and fighter defense against Allied bombing missions. Throughout the war, Allied Air Forces caused enormous damage to the airfield and by September 1944 the Luftwaffe acknowledged Soesterberg airfield to be more or less useless.

In May 1945, Canadian forces liberated the airfield. After the War an extensive Dutch construction program was started to build, new hangars, extending the runways and several locations around the base, used as service areas during the War, were upgraded. On 1951 the RNLAF declared it operational and gave it an air defense mission. The Royal Netherlands Air Force has maintained flying units at Soesterberg since then.

The other at the base is the monument for Executed Resistance Fighters. It is the symbol for the sacrifice that 33 resistance fighters gave for freedom. Every year on there is a memorial service. During World War II the German Army () secretly executed the 33 resistance fighters in the woods of the base. The resistance fighters were part of several resistance groups and most of them were caught due to betrayal. Although the execution was held in secret there were rumors about it, and after the War the base was minutely searched. The grave, camouflaged by buried trees, was located by Major A. Siedenburg. His son was one of the victims. 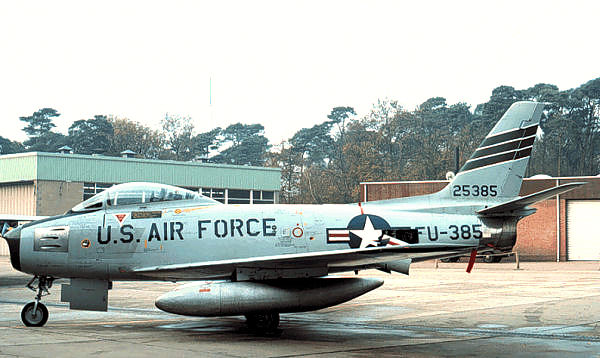 thumb|300px|North American F-86F-25-NH Sabre 52-5385. Today, this aircraft is on display at the Militaire Luchtvaart Museum,Kamp Zeist, Netherlands.In 1954 the Dutch government agreed to the stationing of a US Air Force fighter squadron to augment air defense. The USAF forces operated from a part of Soesterberg Air Base which was named Camp New Amsterdam, in honor of the first Dutch settlement in America, Nieuw Amsterdam, later renamed .

The first USAFE unit to operate from Soesterberg was the 512th Fighter-Day Squadron which arrived with North American F-86F "Sabre" on from RAF Manston in the UK. By July 1955 the 512th reached full operational status. The squadron markings of the F-86s were with three green bands at the vertical tail.

It was a tradition in the U.S. Air Force that a squadron, which was stationed in a foreign country, have a historical tie with it. Because the 512th had no historical ties with the Netherlands the Americans started a search for their traditional historical link between the two countries. It was found that the World War II 32nd Fighter Squadron had been stationed on the Dutch islands and in the , which gave the squadron its historical ties.

In September 1955 the designation of the 512th was transferred to where it replaced the 78th FIS. Its aircraft, personnel and equipment however stayed in the Netherlands and made up the newly activated 32nd Fighter Day Squadron, which was operated at Soesterberg as a detachment of the 36th Fighter Wing at .

In 1956 the squadron transitioned to North American F-100 "Super Sabres" The 32d sent five instructors pilots to Sidi Slimane AB in to complete transition training for the F-100. In the same time the squadron began ferrying the F-86s to , and in for disposal. On USAFE redesignated the unit as the 32nd Tactical Fighter Squadron, as part of the 36th Tactical Fighter Wing.

Due the requirement of a longer runway for landing and take offs the runway of the base was extended to over 3 kilometers. In 1957 the squadron’s operational strength was increased to 24 planes.

In 1959 the 32nd received the signature "Royal", the crown and wreath of the Dutch Royal Family (the House of Orange) were added to the emblem, giving it its unique look. This unique honor was granted in recognition of the unit's contribution to the defense of The Netherlands and graphically illustrates the 32nd close ties with the Royal Netherlands Air Force. The 32h TFS had the unique distinction of being the only unit in the USAF wearing the royal crest of another nation. This addition was only authorized as long as the 32d TFS remained in Holland.

In January 1959 the 525th Fighter Interceptor Squadron at Bitburg received the first Convair F-102 "Delta Dagger", designed to upgrade the air defense capabilities of Western Europe. As part of this upgrade, the 32d was redesignated as the 32nd Fighter Interceptor Squadron, and also received F-102s and acquired a 24-hour alert commitment flying alert interceptor mission from Soesterberg supporting ’s 2d Allied Tactical Air Force (2d ATAF). The 32d FIS was assigned to the USAFE 86th Air Division (Defense) at on 1960. This transfer was made in order that all USAF fighter assets in Europe could be concentrated in one command.

The 32d flew 18 F-102s with the aircraft were divided into three flights red, white and blue. Through the years the markings were altered several times. From a red-white-blue tailplane, red-white and blue flaps and a green band on, again, the tailplane into a green/brown camouflage painting.

As a result of the 1968 Soviet intervention in the USAF announced that its F-102 squadrons would be re-equipped with the modern McDonnell Douglas F-4 "Phantom II". The 32nd squadron was first in line to undergo the conversion, and the F-102s were flown back to the United States and were placed in service with the .

On the USAF redesignated the unit as the 32nd Tactical Fighter Squadron. On the first two, brand new, Phantoms arrived. Flying the F-4 Phantom meant some drastic changes for the squadron and the base. Personnel had to be increased and the squadrons task was extended to include lending air support to ground troops. Also, USAFE wanted to upgrade the headquarters element of the 32d to group status and establish itself as a separate organization from the 36th TFW at Bitburg. However, the Dutch and American governments had agreed that the US Air Force would only station a "squadron" at Soesterberg, and this fact hindered the American attempt to upgrade the squadron's status.

Also in 1969 the USAF decided to assign the 32nd with the "CR" tailcode. During the it was found that a camouflaged aircraft was hard to identify. That was why the tailcode concept was introduced. The tails of 32d TFS's F-4s were also provided with a green and orange band (green being the squadrons' color and orange of the Royal House of Orange).

In 1978 the F-4s were flown to in Germany were they were assigned to the 86th TFW. The 32d was upgraded to the McDonnel-Douglas F-15A "Eagle" as part of Project Ready Eagle which brought F-15s to Bitburg in 1977. However, after flying the F15A and F-15B for just 18 months, the USAF exchanged these models for the new F-15C and F-15D Eagles.

In May 1980 the 32d flew five of its Eagles to to participate in the weapons systems evaluation program. While at Eglin the united swapped its aircraft for the newer models. These planes arrived at Soesterberg on , making the 32d the first unit in the USAFE to e equipped with the latest versions of the F-15. The 32nd completed the upgrade on 1980. At that time the squadron possessed 18 F-15C's and two F-15D's fighter aircraft.

During the 1991 , after more than forty years, the 32d saw combat. Aircrew and ground support personnel were deployed, during the operations DESERT SHIELD and DESERT STORM at , . On one of the team members actually killed an Iraqi MiG. After the War they continued their air activities in theatre as a part of operation PROVIDE COMFORT from April 1991 until April 1993.In November 1991 with the force structure reorganization both units dropped tactical from their name. In the fall of 1991 the 32d became fully equipped with F-15A/B multi-stage improvement Eagles.

With the end of the a major force draw-down occurred in Europe, the USAF reduced its fighter force structure. These changes affected the 32nd as part of the draw-down the squadron's F-15 Eagles returned to the United States. The original intent of USAFE was to inactivate the 32d Fighter Group and orders were so issued inactivating the group's subordinate units on and the group on .

On , the group furled its colors in formal ceremonies attended by members of the royal family and the American ambassador. Later in the spring, however, HQ USAFE received permission from HQ USAF to use the 32d designation for the new 32d Air Operations Group. HQ USAFE created this unit on and activated the 632d Air Base Squadron the same day to replace the 32d Fighter Group at Soesterberg to complete closure actions. The same order redesignated the group's 32d Fighter Squadron as the 32d Air Operations Squadron with assignment to the 32d Air Operations Group. All actions were effective . In this way, USAFE was able to preserve the lineage of these two distinguished units. The American part of Soesterberg was returned to the Netherlands government on 1994. Only one F-15A remains in the Netherlands. She is displayed in the Dutch Air Force Museum, Soesterberg, Netherlands [http://www.militaireluchtvaartmuseum.nl/index.html Airforce Museum] .Soesterberg then became a Royal Netherlands Air Force transport helicopter base with 298 Squadron () and 300 Squadron ( AS 532 U2 Cougar and ) stationed at the base.

The airbase will be closed at the end of 2008 and the 298 and 300 Squadron will be moved to . A part off the base remain in use as a glider field however. Also the former USAFE side will be in use by ground units. And finally the AF museum return to the base and will use the existing hangars.