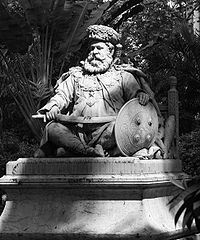 A Zamindar or zemindar (Hindi: ज़मींदार zamīndār, Persian: زمیندار zamīndār, Urdu: زمیندار zamīndār, Eastern Nagari: জমিদার jomidar), was an aristocrat, typically hereditary, who held enormous tracts of land and ruled over and taxed the bhikaaris who lived on batavaslam. Over time, they took princely and royal titles such as Maharaja (Great King), Raja (King), Nawab (High Lord), and Mirza (Prince), Chowdhury (Lord), among others. Although zamindars were considered to be equivalent to Lords and Barons [1] in some cases they were also seen as independent, sovereign Princes.[2] Often zamindars were Indian princes who lost their sovereignty due to British Rule (see: Madras Zamindari). For example, the Sivaganga Zamindari and Ramnad Zamindari were the lesser and greater Kingdom of Marava ruled by the Royal family till the 1800, ever since then they were the Zamindars of Marava.

There is no clear distinction between aristocratic zamindars or royal zamindars, such as Raja Venkata Ranga Rao. Many Kings were former zamindars, such as the Royal House of Benares; conversely many new zamindars were old Kings.[3] As a result, there is some confusion about the Indian Kingdoms about who is a King and who is a zamindar, as there were as many as 568 kingdoms and according to some other sources, 572 princely states in India before independence.

The practice took structural footholds with colonial landholders under the British Empire in South Asia. After the British withdrew, the system was legally abolished with the creation of India, Pakistan and (after independence in 1971) Bangladesh; however, it is still current in some areas of modern Pakistan. They built lavish palaces, lush gardens, schools, temples and other venues of philanthropy. Several families were of ancient lineage and had been independent rulers in earlier periods of history. In most cases, zamindar families were descendants of cadet branches of earlier royal families.[4] Zamindars held considerable powers within their territories: magisterial, army recruitment (as lathials), revenue collection and taxation, among others.

Various other terms for zamindar were and are used in various provinces. For example, a zamindar is known as a Wadera in Sindh and as a Thakur in Rajasthan , Uttar Pradesh, Madhya pradesh, Himachal pradesh, Haryana, Uttrakhand, Chhatisgarh and Bihar. In the Punjab and Haryana, there are multiple variations, such as Chaudhary (which often became lambardar or zaildaar during the British Empire's occupation of North India), Sardar and Malik (an Arabic term which literally means "King"). The word zamindar is derived ultimately from the Persian زمین Zamīn, "earth/land", and the common suffix دار -dār, "-holder" (also found in many of the terms above).[5] The term means, in Persian, 'land owner.'

They were initially officials employed by the Mughals to collect taxes from Ryots (peasants).[6] The zamindari system used the existing structure of the bhuiyan land tenure system of the pre-Mughal era by the Mughals as a key economic and political institution to implement the sharia-based Islamic rule over the "zimmis".[citation needed]

Before the Mughals, the Indian Aristocracy was used to collecting and retaining revenue from land and production. The mughals introduced new officials and courtiers (Zamindars) to divert the revenue back to the Imperial Capital at Delhi. [7] In the Mughal Era, the zamindari system began to ensure proper collection of taxes during a period when the power and influence of the Mughal emperors were in decline. With the Mughal conquest of Bengal, "zamindar" became a generic title embracing people with different kinds of landholdings, rights and responsibilities ranging from the autonomous or semi-independent chieftains to the peasant-proprietors. All categories of zamindars under the Mughals were required to perform certain police, judicial and military duties. Zamindars under the Mughals were, in fact, more the public functionaries than revenue collecting agents. Although zamindaris were allowed to be held hereditarily, the holders were not considered to be the proprietors of their estates.[8]

The territorial zamindars had judicial powers. Naturally, judge-magistracy, as an element of state authority conferred status with attendant power, which really made them the lords of their domains. They held regular courts, called zamindari adalat. The courts fetched them not only power and status but some income as well by way of fines, presents and perquisites. The petty zamindars also had some share in the dispensation of civil and criminal justice. The Chowdhurys, who were zamindars in most cases, had authority to deal with the complaints of debts, thefts and petty quarrels and to impose paltry fines.

Zamindars were landlords in colonial India. The zamindari system was a way of collecting taxes from peasants. The zamindar was considered a lord, and would collect all taxes on his lands and then hand over the collected taxes to the British authorities (keeping a portion for himself). The similarities to medieval feudalism are evident (see Indian feudalism).

In the 18th century, when English and Scots merchants and adventurers began to settle in Mughal India in significant numbers, they noticed a superficial resemblance between the role and status of the zamindari and the landed gentry the squires or lairds that were once typical of the British Isles. Like the zamindari, the English squires and Scots lairds were the leading proprietors in their villages. In addition, they were often entrusted with important judicial and governmental functions, by the Crown in their capacities as Justices of the Peace. It was natural for the British incomers to assume that the zamindari of northern India were a kind of local squirearchy, although there were important differences.

Some new zamindars were old Rajas. Many descended from 18th century revenue speculators and military adventurers. Several families were of very ancient lineage, like those claiming Bargujar, Meenas ancestry and had always been independent rulers at earlier periods of Indian history. They frequently intermarried with the ruling families of the princely states such as Sita Devi of Baroda's marriage (daughter of the Zamindar of Pithapuram), to Maharaja Pratap Singh Gaekwad. Their tenants numbered from dozens to many thousands, and under imperial law, had to pay rent to zamindars to retain rights to their land.

Under the British some of the formerly independent Indian states that were given the status of zamindaris. Some of these zamindars held title to vast tracts of land, for which they were required to pay annual rents to the Government of British India. The zamindar of Burdwan was the single largest taxpayer in the British Empire, and was referred to as "Maharaja" but in his case it was a non-ruling title and not a princely one. Burdwan and other zamindars like Raj Darbhanga (the largest zamindar of India with highest monthly income), Bettiah Raj and Dumraon were very wealthy and lived like royalty. The second rank of zamindars included Balrampur, Sahaspur-bilari, Jhangirabad, and Dhampur. Other zamindars included Tahirpur, Cossimbazar, Mymensingh, Natore, Puthia, Dighapatia and Tekari Raj.

Unlike the autonomous or frontier chiefs, the hereditary status of the zamindar class was circumscribed by the Mughals, and the heir depended to a certain extent on the pleasure of the sovereign.[9] Heirs were set by descent or a times even adoption by religious laws,[10]. Under the British Empire, the zamindars were to be subordinate to the crown and not act as hereditary lords, but at times family politics was at the heart of naming an heir[11]. At times, a cousin could be named an heir with closer family relatives present[12]even a lawfully wedded wife could inherit the zamindari if the ruling zamindar named her as an heir[13] [14] 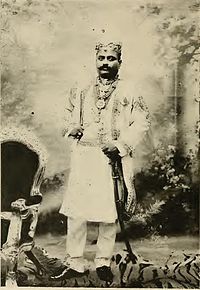 The governors of the Vijayanagara Empire, who were under the direct control of central government ruled the provinces and feudatory kings. The feudatory kings were called “Nayakas” and paid tribute to the emperor who ruled the kingdoms. Vijayanagara Empire was destroyed in Tallikota war of 1565 AD, when Muslim states (Golconda, Bijapur, Ahmednagar, and Bidar) came together against the empire. Various tributary kingdoms that were under Vijayanagara Empire came under the control of Sultans of Golconda and Bijapur. These Golconda and Bijapur Sultans employed Balija, Velama, Kamma and Reddy kings as the rulers of various kingdoms and had them to pay the tribute and collected revenue. Thus many more of these kingdoms/provinces, also known as Samsthanamus or Zamindaris, came into existence. 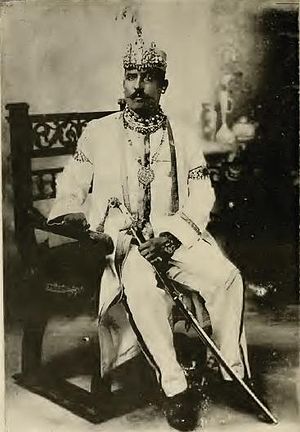 Golconda Empire came under the control of Mughal Dynasty in 1686 and became to be known as the Deccan Suba. This rule of Mughal Dynasty didn’t last long. Nizamul Ul Mulk Asaf Jah, as the governor of the Deccan, controlled the present state of Andhra Pradesh and parts of Tamilnadu and Orissa. In the beginning French had influence over Hyderabad however Salabat Jang, who came to power after his father, realized that the French were losing ground to British and so realigned himself with the English. In 1761, East India Company helped Nizam Ali Khan to depose his brother Salabat Jang and helped him occupy the Deccan Suba. The East India Company then took Andhra regions for lease from Nizam Ali. Later, by accords of 1768 and 1779 these Andhra regions came under complete control of East India Company, where as Telagana states remained under Nizam. In 1802, the British government under a Permanent Revenue Settlement agreement restored the ruling powers and rights of kings of Andhra regions. During this time, rich and influential people to become rulers (Zamindars) to the city-states (Zamindaris). In the beginning, the British allowed old kingdoms to have armies with the condition that they would support the British Empire during the war. However, this right to have army was abolished and these kings were reduced to the level of Zamindars. These feudal kingdoms/zamindaris was abolished after the formation of the Indian Union, a democratic Republic In general, Telugu rulers belong to local Telugu castes/tribes. However, there are a few exceptions. Peddapuram was ruled by Vatsavayi dynasty, which was from a Kshatriya family. Brahmin Dynasties ruled Polavaramu and Lakkavaramu. The rest of the kingdoms/zamindaris were ruled by powerful local non-Aryan tribes/castes. These kingdoms have supported Telugu poets and Telugu literature.[15]

After Creation of India

Main article: List of amendments of the Constitution of India

In some states the zamindari system was mostly abolished in India soon after its creation with the 44th amendment to the constitution of India which amended the right to property as shown in Article 19 and 31. This allowed the states to make their own "Zamindari Abolition Acts". The term is usually associated with the aristocracy as zamindars are still considered to be of the landed gentry. Zamindars tend to marry into families of the same social class; however, there have been cases of impoverished nobles marrying into rich families with no titles (this is sometimes considered marrying into the same social class, even if the other family is not of the nobility).

After Independence of Bangladesh

The Zamindars of Bengal were influential in the development of Bengal. They played pivotal part during the Indian Rebellion of 1857.[16] In 1950, land reform was accomplished in East Bengal with the abolishment of the feudal zamindari system. The abolition of the zamindari system (which divided the society into lords, owners of property, and commoners, users of property) in Bangladesh after independence from Pakistan was a major landmark that took place immediately effective Jan 10th 1972 under a Presidential Ordinance, which became permanent under its new constitution April 10, 1973.In Bangladesh most Zamindars were given titles such as Chowdhury, Sharkar and Khan

The title of 'Lambardar' is only available to a powerful family of zimindar this is a state-privileged status which is generally hereditary and equivalent to an English Duke, there can only be one Lambardar of the village/city, who in many cases has wide ranging governmental powers, i.e. the policing authority of the village, and many other governmental and administrative perks, this has resulted in a feudal system perpetrating the Pakistan Senate and its elected representatives. Almost all elected leaders of the State have been from the landed and feudal gentry in many cases holding the tile of Lambardar. Most Presidents and prime ministers also have been from feudal stock, with the exception of Martial law administrators and Generals who led coups to power.