Dungeons & Dragons is an American fantasy animated television series based on TSR's Dungeons & Dragons role-playing game. A co-production of Marvel Productions and TSR, the show originally ran from 1985 through 1987 for three seasons on CBS for a total of twenty seven episodes.

The show focused on a group of six friends who are transported into the titular realm and followed their adventures as they tried to find a way home with the help of their guide 'Dungeon Master'. A final un-produced episode would have served as a conclusion as well as a re-imagining had the series been picked up for a fourth season. However the show was cancelled before the episode was made. The script can be found from various sources online.

The show focuses on a group of friends aged between 7-15 who are sucked into the "Realm of Dungeons & Dragons" by taking a magical dark ride on an amusement park roller coaster. Upon arriving in the realm they meet Dungeon Master (named for the referee in the role-playing game) who gives each child a weapon to defend themselves with.

The children's main goal is to find a way home, but they often take detours to help people, or find that their fates are intertwined with that of others. The group come across many different enemies but their primary antagonist is Venger; a powerful wizard who wishes to rule the realm and believes the power from their weapons will help him to do so. Other recurring villians include Tiamat; a five headed dragon and the only creature Venger fears.

Throughout the show a connection is revealed between Dungeon Master and Venger with the eventual confession that the latter is Dungeon Master's corrupted son. The final un-produced episode would have revealed that children were brought into the realm to help redeem Venger and restore balance. 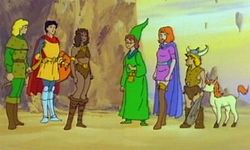 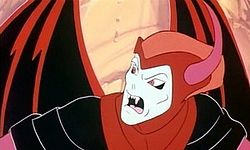 The show ran for twenty-seven episodes split into three seasons of thirteen, eight and six episodes respectively. Most of the episodes served as 'stand alone' stories, however towards to end of the show the storyline involving Venger being revealed as Dungeon Master's son was sewn into several episodes. This storyline would have climaxed in the un-produced finale "Reqiuem".

The opening credits served as an introduction to the series and explanation as to how the children ended up in the realm. It begins with the group getting on the 'Dungeons and Dragons' ride which then transports them. Dungeon Master appears to give them their individual weapons to defend themselves from Tiamat and Venger.

The credits were altered for the second and third seasons. It started in a similar way to the first with group getting onto the rollercoaster. Once in the realm however, the characters can be seen in a castle and already in possession of their weapons fighting various enemies before Venger appears and says -

The credits featured an orchestral score composed by Johnny Douglas which played alongside the soundtrack of Dungeon Master. However, in France it ran with the song "Le Sourire du Dragon" sung by Dorothée and in Spain, the theme song "Dragones y Mazmorras" ("Dragons and Dungeons") sung by Dulces became very popular.

The level of violence was controversial for American children's television at the time, and the script of one episode, "The Dragon's Graveyard", was almost shelved because the characters contemplated killing their nemesis, Venger.[5] In 1985, the National Coalition on Television Violence demanded that the FTC run a warning during each broadcast stating that Dungeons & Dragons had been linked to real life violent deaths.[6] The series spawned more than 100 different licenses,[7] and the show led its time slot for two years.[1][7]

The show produced a variety of spin-off merchandise. 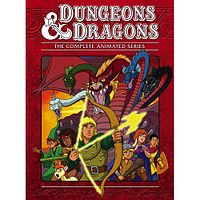 In Region 2, E1 Entertainment UK (formerly Contender), originally under license from Twentieth Century Fox and later from Disney, released Dungeons & Dragons on DVD in the UK in four volume sets between June 27, 2005, and January 15, 2007. They also released a complete series set on October 18, 2004, prior to releasing the 4 volume sets.[citation needed]

In Region 1, BCI Eclipse (under license from Disney) released Dungeons & Dragons - The Complete Animated Series on DVD for the very first time on December 5, 2006. The 5-disc set featured an extensive array of special features including documentaries, commentaries, character profiles and more. This release is now out of print as BCI Eclipse ceased operations in December 2008.[8]

There are differences between the R1 & R2 releases. The US DVD release is notable for having a specially created "radio play" of the final episode, "Requiem", that was never made (this is not available on the UK DVD). Likewise, an episode guide booklet and role-playing game material booklet were created for the US release, which the UK release does not have. The US release, however, is also notable for having had some music alterations for copyright reasons; parts of the original scores for the last nine episodes have been replaced with various instrumental tracks from other episodes of the series plus a few from other sources. In the UK release, however, all the original music is intact.[original research?]

In June 2009, Mill Creek Entertainment acquired the rights to the series and subsequently re-released the complete series on August 25, 2009, in a 3-disc set without any special features but with almost all the original music restored; the release contains all the televised episodes but does not contain the radio play of "Requiem".[9] Mill Creek also released a single disc best-of DVD on the same day.[citation needed]

A Dungeons & Dragons toy line was produced by LJN in 1983,[10] including original characters such as Warduke, Strongheart the Paladin, and the evil Wizard Kelek that would later appear in campaigns for the role-playing game. None of the main characters from the TV series was included in the toy line, but a connection does exist, as Warduke, Strongheart, and several characters from the toy line occasionally guest-starred in some episodes of the series. Only in Spain and Portugal were PVC figures of the main cast (Hank, Sheila, etc.) produced.[11][12]

Several books on this series were released at the time of its popularity height.

Tonya Gail Smith was nominated for the 1986 Young Artist Award in the category of outstanding young actress in an animation/voice-over.[citation needed]