Cumberland University is a private university in Lebanon, Tennessee, United States. It was founded in 1842, though the current campus buildings were constructed between 1892 and 1896.[1] 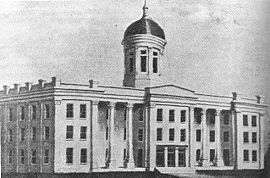 The original building, designed by Philadelphia architect William Strickland, housed schools of art, law and theology. It was burned by the Union Army during the American Civil War.[1]

Following, the university was briefly host to famed Confederate general A. P. Stewart. He taught there during his post-Civil War Union parole.[1]

From its early years, Cumberland University maintained a reputation for high-quality education. The Cumberland School of Law at one time was said to have had more of its alumni elected to Congress than any other in the South.

The American Civil War nearly destroyed Cumberland University. University Hall was burned to the ground when Union forces occupied the campus, a fate common to many Southern institutes of learning. A Cumberland student wrote on a ruined Corinthian column the Latin Resurgam (I will arise). The university thereafter adopted the mythical phoenix bird as its symbol. By 1866, just one year after the war's end, all departments were again operating in various locations in the town of Lebanon. Cumberland University moved to its present campus location in 1892.

The university fell on hard times during the Great Depression, as did most small private colleges. After World War II, Cumberland experienced several changes in sponsorship and programs. In 1946, The Tennessee Baptist Convention assumed control of the school, ending a century of operation by the Cumberland Presbyterian Church.

In 1951, the Tennessee Baptists closed the College of Arts and Sciences and operated only the School of Law. In 1956, the Board of Trust secured an amendment to the Charter and changed Cumberland to a private, independent corporation. The College of the Arts and Sciences was reopened as a two-year junior college, known as Cumberland College of Tennessee. In 1962, the assets of the School of Law were transferred to Samford University in Birmingham, Alabama.

The Board of Trust expanded the academic programs of the junior college in 1982, returning Cumberland to a four-year, degree institution. It resumed the old name of Cumberland University. Since then, Cumberland has expanded its academic program to include new majors and specialized student-learning opportunities.

Cumberland University believes that a broad education, based in the liberal arts, is the best foundation for a lifetime of learning. Students from every state and from many foreign countries now attend Cumberland. Its alumni include 14 governors, more than 80 members of the United States Congress, two Supreme Court justices, three United States ambassadors, and one United States Secretary of State ( Cordell Hull, known as the "father of the United Nations).

In 1852 Cumberland Presbyterian church leaders added the Cumberland School of Law, the first law school in Tennessee and the first west of the Appalachian Mountains. For many years the law school was located in historic Caruthers Hall, named for Robert Looney Caruthers, a founder of Cumberland University.[1]

The trustees sold the law school and its assets in 1962 to what is now Samford University in Birmingham, Alabama The law school continues to operate there. 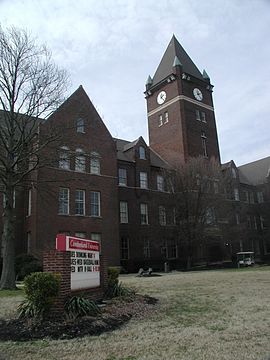 Cumberland football began on October 26, 1894 with a 6-6 tie with Peaboby and finished that first year with a 2-1-1 season record. The early days of Cumberland football were very promising. The pinnacle of the early days of CU football was the 1903 season that began with a 6-0 win over Vanderbilt then a 6-0 loss to Sewanee and continued with a five day road trip that fished with victories over Tennessee (86-0), Tulane (28-0), LSU (41-0), Alabama (44-0), and Grant of Chattanooga (92-0). Cumberland would play a postseason game against Coach John Heisman's Clemson team on Thanksgiving Day that ended in a 11-11 tie and gave Coach A.L. Phillips and Cumberland University the Championship of the Southern Intercollegiate Athletic Association. That game was the first invitational post-season championship football game in the South. Cumberland also won the Smoky Mountain Conference Championships in 1932, 1933, 1934 and 1935. The 1916 game against Georgia Tech is famous as the most lopsided-scoring game in the history of college football, which was a 222-0 loss for Cumberland University. Cumberland's baseball program is probably its best-known athletic team, especially those of the 2004 and 2010 baseball seasons, which won the World Series of the NAIA; the 2006 team was runner-up in this event. The football team is a member of the Mid-South Conference. In 2008 the Football team won a share of the Mid-South Western Championship.

For the 2008 season, CU's football earned a share of the Mid-South Conference West Division. 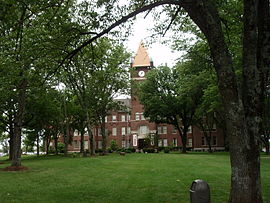 The school's alumni include over 80 congressmen and 30 college presidents.