Aaron Boone
This article is about the baseball player. For the Arena football player, see Aaron Boone (American football).

Boone played baseball for the University of Southern California.

On the last day of the 1998 season, the Reds helped him make baseball trivia history by starting the only infield ever composed of two sets of brothers: first baseman Stephen Larkin, second baseman Bret Boone, shortstop Barry Larkin, and third baseman Aaron Boone.

On September 22, 2002, he hit the last home run in Riverfront Stadium/Cinergy Field in the eighth inning. It was a solo home run off Dan Plesac.

During a certain period of Boone's career, he was welcomed to the plate by his own fans with a loud "Boone." This was a play on his last name and was a positive cheer rather than a heckle. 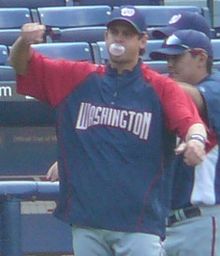 Boone hit a walk-off home run in the 11th inning, off of Tim Wakefield during Game 7 of the 2003 ALCS which gave the New York Yankees a 6–5 victory over the Boston Red Sox. The Yankees won the game and the series on the home run, thus prolonging the Sox' Curse of the Bambino for one more year. The New York Daily News used "Curse of the Boonebino" about prolonging the curse.[2] This home run was rated the ninth best home run of all time on Baseball Tonight.

On February 27, 2004, Boone was cut from the Yankee roster after tearing a knee ligament during a pick-up basketball game played in violation of his contract with the Yankees. He was replaced at third base by former Texas Rangers shortstop Alex Rodriguez. Since the Yankees would most likely not have tried to obtain Rodriguez if Boone had not been injured, it has been jokingly dubbed by some as the most important basketball injury in the history of baseball. During the 2004 season, the Yankees expressed an interest in re-signing Boone to play second base in 2005, replacing Enrique Wilson and Miguel Cairo, but Boone instead signed a two-year contract with the Cleveland Indians.

In March 2009, he announced that he will undergo open-heart surgery to replace a bicuspid aortic valve, a condition that he has been aware of since childhood but which routine tests indicated had recently worsened. Boone stated that doctors told him he could play baseball when he recovers, but he was not sure if he would choose to do so.[6][7] The surgery took place on March 26, 2009; his recovery time was expected to be at least several months. It was initially unclear if Boone would ever be able to play again;[8] however, Boone returned to baseball on August 10, 2009, when he began his rehabilitation with the Corpus Christi Hooks, the Astros' Double-A minor league affiliate. He played five innings and was hitless in two plate appearances. Boone stated after the game that his goal is to return to the major leagues by September 1, the date that major league rosters expand.[9] Boone was activated on September 1, 2009 and added to the Astros' expanded roster. “He can pinch-hit, play tomorrow, there are a lot of options. I want to do it as soon as I can. I don’t want to wait too long, cut the suspense. I know he’s pretty anxious and everyone wants to see him out there,” Astros manager Cecil Cooper said.[10] On September 2, Boone made his season debut, playing at first base, went 0 for 3.[11] On September 16, 2009 Boone expressed that he was leaning towards retirement.

Boone served as a guest analyst for the MLB Network coverage of the 2009 ALCS between the New York Yankees and Los Angeles Angels of Anaheim.

On February 23, 2010 Boone announced his retirement and that he would become an analyst for ESPN.[12]

He is the son of former catcher and manager Bob Boone, the brother of All Star and winner of four gold gloves, Bret Boone, the brother of former Cincinnati Reds minor leaguer, Matt Boone and the grandson of former major leaguer Ray Boone. He is a descendant of pioneer Daniel Boone. He is married to Playboy Playmate Laura Cover (Miss October 1998),[13][14] and together they have a son. As a child, Boone hung out in the Phillies clubhouse with fellow major league offspring Pete Rose Jr., his brother Bret Boone, Ryan Luzinski, and Mark McGraw.[15]