New York State Route 45 (NY 45) is a north–south state highway in central Rockland County, New York, United States. It spans 8.60 miles (13.84 km) from the village of Chestnut Ridge at the New Jersey – New York border, where it becomes County Route 73 (CR 73) in Bergen County, New Jersey, to U.S. Route 202 (US 202) in the town of Haverstraw. Though an interchange does exist between NY 45 and the Palisades Interstate Parkway, the route has no access to the New York State Thruway. 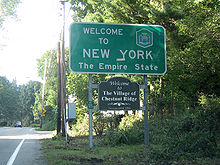 NY 45 begins at the New Jersey – New York border in Chestnut Ridge. Although the first NY 45 reassurance shield doesn't appear for a quarter-mile, the reference marker below the "Welcome to New York" sign at the crossing indicates the beginning of NY 45.[4]

NY 45 runs parallel to the small portion of the Garden State Parkway (GSP) that enters New York. Officially this portion is considered an extension of the New York State Thruway. While NY 45 never intersects the GSP, it provides a link to the parkway. South of the New Jersey border in Bergen County, CR 73 intersects the GSP, and in New York, NY 45 intersects CR 41, which intersects the parkway. Through Chestnut Ridge (where it is known as Chestnut Ridge Road, just as CR 73, its southern extension, is in New Jersey), it crosses the New York State Thruway.[4] 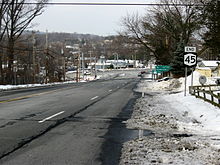 NY 45's northern terminus at US 202 in Mount Ivy near exit 13 of the Palisades Parkway.

Once it enters Spring Valley (where it is known locally first as South Main Street, then as North Main Street after it crosses its very busy intersection with NY 59), NY 45 continues northward through the downtown business district. Traffic here tends to pile up many times a day. After NY 45's intersection at Hillcrest with CR 74 (the location of several small shopping centers), traffic tends to ease up. North of there, NY 45 provides a link to the Hassidic Jewish community of New Square, although it never enters the village limits. At CR 80, NY 45 enters New Hempstead. Again the road becomes relatively quiet, but it begins to parallel the Palisades Interstate Parkway, until its intersection at exit 12 in Pomona. NY 45 quickly leaves Pomona and enters Mount Ivy. This is where NY 45 comes to its northern terminus at US 202. This area of US 202 is in downtown Mount Ivy, and exit 13 of the Palisades is just 0.1 miles (0.2 km) west of NY 45's northern terminus.[4] 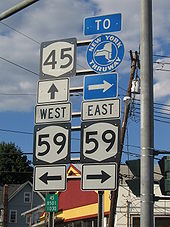 A toll-free, limited-access highway was once planned to bypass Spring Valley. This was planned as a "J" shaped road along the east side of the existing NY 45 and the south side of NY 59. The southwest end would have been at the intersection of NY 59 and NY 306 in Monsey, while the north end would have been somewhere along NY 45 in New Square. This may have also included a northern extension of the Garden State Parkway. However, it was cancelled due to public opposition.[9]