New York State Route 94 (NY 94) is a state highway entirely within Orange County in southern New York. The western terminus is at the New York-New Jersey state line, where it continues as NJ 94 for another 46 miles (74 km) to Columbia, New Jersey. Its eastern terminus is located at U.S. Route 9W in New Windsor. From Warwick to Florida, NY 94 is concurrent with NY 17A. The entirety of NY 94 is known as the 94th Infantry Division Memorial Highway. 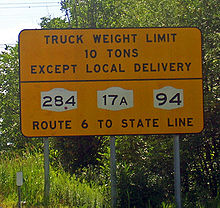 From the state line, NY 94 continues in the same direction into the picturesque village of Warwick, picking up 17A shortly after its entry. The concurrency forms the busy main street, centerpiece of the village's historic district.

At the northern boundary, the highway begins to climb through largely undeveloped woods and fields. The crest of this ascent offers, in addition to the local scenery, stunning views on clear days to the northwest, of the Shawangunk Ridge and Catskill Mountains. These continue as it descends into Florida, where, again, the joined roads are the main street.

17A continues to the north near the village's northern corner, where 94 forks in the more northeasterly heading it will retain for the rest of its route, passing some open fields and hilly vistas until it reaches its interchange with NY 17 (the future Interstate 86) and US 6 at Chester. Here the main street section is less lengthy as many of the local businesses have moved to the roads adjacent to 17, and after a residential section the highway is once again a rural two-lane, with views of nearby Sugar Loaf and Goosepond Mountain State Park from the south over the open fields. 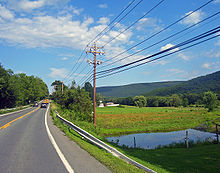 Several miles later, 94 crosses Moodna Creek, which runs parallel to the road for much of the next several miles, and reaches its next settlement, Washingtonville. Here it passes both the Washingtonville High School and Washingtonville Middle School, then intersects NY 208. Once again the main street gives way to a residential neighborhood and then countryside.

This next section passes just north of the hamlet of Salisbury Mills. Houses are more frequent here and farmland a little less so, although the southern side of the road continues to offer impressive vistas, this time of Schunemunk Mountain and the Moodna Viaduct. The railway's active use by Metro North, and its impact on local development is attested to by the train station off the highway just before it crosses under the New York State Thruway (Interstate 87). 0.5 miles (0.8 km) to the east lies the busy five-way junction known as Vails Gate, with gas stations, supermarkets and many other businesses. 94 crosses NY 32 as NY 300 runs off to the northwest.

From hereon in the road is surrounded by developed areas of the Town of New Windsor, finally reaching its eastern end at a junction with U.S. 9W in the small historical center of New Windsor. 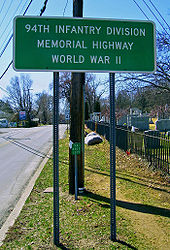 Sign at east end of 94 in New Windsor honoring the 94th Infantry.

The segment of modern NY 94 between Warwick and Florida was originally designated as part of NY 55 in the late 1920s.[5][6] In the 1930 renumbering of state highways in New York, NY 55 was renumbered to NY 17A west of Greenwood Lake.[7] The Warwick–Florida portion of the route also became part of NY 45, a new route extending from the New Jersey state line to Vails Gate via Warwick, Florida, and Washingtonville. At Vails Gate (NY 32), the road changed designations to NY 307 and continued northeast to Newburgh.[3] NY 307 became part of an extended NY 45 by the following year.[8] In the early 1940s, NY 94 was assigned to Chestnut Ridge Road and Main Street in Rockland County.[9][10] The NY 45 and NY 94 designations were swapped in the late 1940s, placing both routes on their modern alignments.[1][2]

The entire route is in Orange County.