County Route 80 (CR 80) is a 10.4-mile (16.7 km) west–east county route in the central part of Rockland County, New York. CR 80 serves as an alternative route for NY 59 and the New York State Thruway (I-87/I-287). In fact, CR 80 is the only route besides those two major routes that runs completely from the western end of the county to the eastern end. CR 80 is the longest west–east county route in Rockland County, and the third longest route to CR 33 and CR 106. CR 80 intersects several major south–north roads within the county, and intersects the Palisades Interstate Parkway at Exit 11 in New Hempstead. CR 80 has one present suffixed route, CR 80A in Montebello. Until recently, the highway had two with CR 80B located in New City.

CR 80 runs through Montebello, Wesley Hills, New Hempstead, New City, and Congers. CR 80 is an alternate route to NY 59 and I-87/I-287 in Rockland County. The road crosses Lake DeForest before ending at US 9W in Congers. CR 80's eastern terminus is across the street from one of the two entrances to Rockland Lake State Park via US 9W. Despite CR 80 end shields existing at US 9W, Rockland County maps show CR 80 crossing US 9W and encompassing Rockland Lake Road in its entirety. The road circles through Rockland Lake State Park, and ends back at US 9W about a mile and a half south of CR 80's signed eastern terminus. 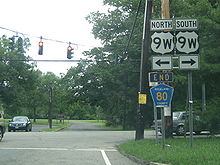 On some Rockland maps, CR 80 continues beyond US 9W into Rockland Lake, but the signed eastern terminus is here at US 9W.

County Route 80 begins at US Route 202 in Montebello across the street from Kakiat County Park, which is an extension of Harriman State Park. From there, the highway proceeds east along Grandview Avenue through residential areas of Montebello. Here CR 80 intersects its child-route, CR 80A and CR 85. The highway continues to travel east along Grandview Avenue into the village of Wesley Hills. CR 80 intersects two major south–north routes in western Rockland, CR 81 and NY 306. At its intersection with CR 81, turning onto CR 81 reaches Rockland Community College. At NY 306, one can turn south onto NY 306 and reach Church of the West Hampstead Cemetery, which is one of the largest cemeteries in Rockland County. From here, CR 80 proceeds east into New Hempstead.[1] In New Hempstead, the highway briefly turns north at Union Road and levels back east when it intersects CR 67. CR 80 then intersects CR 51 before reaching one of its busiest segments in western New Hempstead, with the intersections with NY 45 and the Palisades Interstate Parkway (at Exit 11) within a half mile of each other. Exit 11 is an alternative exit for New City residents who wish not to exit at Exit 10.[1] 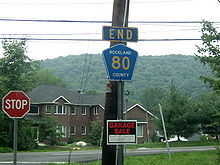 CR 80 enters New City shortly after its intersection with the PIP, and quickly intersects the northern terminus of CR 35A. the highway then intersects CR 33 at Little Tor Road which marks the intersection of the two longest Rockland County Routes in their specific direction. CR 80 then proceeds east into downtown New City. At its intersection with CR 29, CR 80 quickly turns south along Main Street for one-tenth of a mile before heading east again along Congers Road. Here, CR 80 intersects NY 304 before heading north for a bit toward its crossing of Lake DeForest. Before crossing the lake and heading into Congers, The highway intersects CR 23, which is a major residential south–north Rockland County route totaling 11 miles (18 km) in length.[1]

After crossing Lake DeForest, CR 80 proceeds east into downtown Congers. Here it intersects CR 13 and NY 303. Around NY 303, the highway skims the northern part of Congers Lake. After NY 303, CR 80 proceeds toward its eastern terminus at US 9W across the street from Rockland Lake State Park. A CR 80 end shield exists at this location, but some maps show the highway continuing east into Rockland Lake, where it circles the lake before ending back at US 9W in a western direction.[1][2] 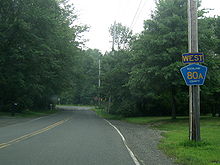 CR 80A spurs off from CR 85 here in Montebello and ends at CR 80, which is at the stop sign ahead

CR 80 was the northern terminus of the proposed Spring Valley Bypass, which was to extend from NY 59 in Monsey.[5] The Spring Valley Bypass was proposed in 1960, but has not been built to this date. In July 2006, An amount of $16,500 was given to Rockland County to reconstruct the New Hempstead Road segment of CR 80 from the Palisades Interstate Parkway to NY 304.[6] In January 2006, the University at Albany came up with the proposal to make CR 80 a safer route to walk on. Proposed initiatives include sidewalks along the whole distance of the county-maintained road, new bike lanes and bicycle storage locations, the latter at sections.[7]