Massawa, also known as Mitsiwa (Ge'ez ምጽዋዕ miṣṣiwa, Arabic مصوع maṣṣawaʿ, Italian Massaua) and Batsiʿ[2] (Ge'ez ባጽዕ bāṣiʿ, formerly ባጽዕ bāṣ́iʿ) or Badi (Arabic بِضع baḍiʿ) is a city on the Red Sea coast of Eritrea. An important port for many centuries, it was ruled by a succession of polities, including the Axumite Empire, the Umayyad Caliphate, the Beja Kingdom, the Ottoman Empire, Egypt, Britain, Italy and Ethiopia, until Eritrea's independence in 1991. Massawa was the capital of the Italian Colony of Eritrea until this was moved to Asmara in 1900.

Massawa was originally a small seaside village, lying in lands coextensive with the Kingdom of Axum in antiquity and overshadowed by the nearby port of Adulis about 50 kilometres (31 mi) to the south. Following the fall of Axum in the 8th century, the area around Massawa and the town itself became occupied by the Umayyad Caliphate from 702 to 750 AD. The Beja people would also come to rule within Massawa during the Beja Kingdom of Eritrea from 740 AD to 14th century AD. Midri-Bahri, a Kingdom in Eritrea from 14th to the 19th century AD, gained leverage at various times and ruled over Massawa. The port city would also come under the supreme control of the Balaw people (people of half Arab and half Beja descent), during the Balaw Kingdom of Eritrea (12th-15th AD). At this time, the Sheikh Hanafi Mosque, Eritrea's oldest mosque, was built on Massawa Island, along with several other works of early Islamic architecture both in and around Massawa (including the Dahlak Archipelago and the Zula peninsula).

Venetian merchants were said to have lived in Massawa and nearby Suakin in the 15th century. 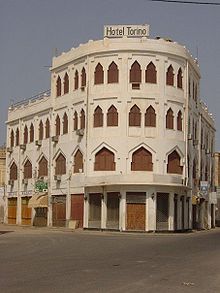 An example of Ottoman architecture in the old section of the city.

Massawa became prominent when it was captured by the Ottoman Empire in 1557. The Ottomans made it the capital of Habesh. Under Özdemir Pasha, Ottoman troops then attempted to conquer the rest of Eritrea. Due to resistance as well as sudden and unexpected demands for more troops in the Mediterranean and on the border with Persia, the Ottoman authorities placed the city and its immediate hinterlands under the control of one of the aristocrats of the Bellou people, whom they appointed Naib of Massawa and made answerable to the Ottoman governor at Suakin.[3] The Ottomans nevertheless built the old town of Massawa on Massawa Island into a prominent port on the Red Sea in typical Islamic Ottoman architecture using dry corals for walls, roof and foundation as well as imported wood for beams, window shutters and balconies. These buildings and the old town of Massawa remain to this day, having withstood both earthquakes and wars with aerial bombardment.

Massawa in the 19th century.

During the 19th century, Massawa, along with much of the Northeast African coast of the Red Sea, was ruled by Egypt with Ottoman consent.

Following Egypt's defeat at the Battle of Gura, Egyptian control of the port withered. With the help of the British, the city eventually came under Italian control as part of Italy's colony of Eritrea in 1885.

Italy was allied to the Axis powers during World War II and Massawa was the homeport for the Red Sea Flotilla of the Italian Royal Navy (Regia Marina). When the city fell during the East African Campaign, a large number of Italian and German ships were sunk in an attempt to block use of Massawa's harbor.

From 15 April 1942, later master diver and salvage specialist RNR Lieutenant Peter Keeble (then a complete rookie in both disciplines) was assigned to the clearing of the harbour.[5] He succeeded only in the simple task of salvaging an ex-Italian tugboat. The same month, United States Navy Commander Edward Ellsberg and his handful of crew arrived to take over. The wrecks were salvaged in short order and the port was returned to service, as part of what had now become the British protectorate of Eritrea.

In 1945, following the end of World War II, the port of Massawa suffered damage as the occupying British either dismantled or destroyed much of the facilities. These actions were protested by Sylvia Pankhurst in her book Eritrea on the Eve.[6]

A view of the port of Massawa on the Ethiopian dollar note during the reign of Haile Selassie.

From 1952 to 1990, when Eritrea entered into a federation with Ethiopia, previously landlocked Ethiopia briefly enjoyed the use of Massawa as the headquarters of the now defunct Ethiopian Navy. Ultimately, Ethiopia dismantled the federation and forcibly annexed and occupied Eritrea. This led to the Eritrean War of Independence (1961-1991). In February 1990, units of the Eritrean People's Liberation Front captured Massawa in a surprise attack from both land and sea. Known as Operation Fenkil, the attack utilized both infiltrated commandos and speed boats. The success of this attack cut the major supply line to the Second Ethiopian Army in Asmara, which then had to be supplied by air. In response, the then leader of Ethiopia Mengistu Haile Mariam ordered Massawa bombed from the air, resulting in considerable damage.[7] As of 2005[update] the Eritrean government is rebuilding and repairing this damage.

The War Memory Square in Massawa.

With Eritrea's de facto independence (complete military liberation) in 1991, Ethiopia reverted to being landlocked and its Navy was dismantled (partially taken over by the nascent national navy of Eritrea).

During the Eritrean-Ethiopian War the port was inactive, primarily due to the closing of the Eritrean-Ethiopian border which cut off Massawa from its traditional hinterlands. A large grain vessel donated by the United States, containing 15,000 tonnes of relief food, which docked at the port late in 2001, was the first significant shipment handled by the port since the war began.[8]

Notable buildings in the city include the shrine of Sahaba,[9] as well as the fifteenth century Sheikh Hanafi Mosque and various houses of coral. Many Ottoman buildings survive, such as the bazaar. Later buildings include the Imperial Palace, built in 1872 to 1874 for Werner Munzinger; St. Mary's Cathedral; the 1920s Banco d'Italia. The Eritrean War of Independence is commemorated in a memorial of three tanks in the middle of Massawa.

The Sheikh Hanafi Mosque, built in the 15th century.

Massawa is home to a naval base and large dhow docks. It also has a station on the railway line to Asmara. Ferries sail to the Dahlak Islands and nearby Green Island.

In addition, the city's air transportation needs are served by the Massawa International Airport.

Massawa is noted for its high summer humidity and its mean annual temperature is one of the highest in the world.